Playing on your phone is as bad for your skin as the SUN: Blue light can cause premature ageing says expert who warns that people should wear sunscreen while using devices

Blue light from laptops, tablets and phones can cause skin ageing, mottling and hyperpigmentation, experts have warned.

Melbourne dermatologist Dr Shyamalar Gunatheesan has urged people to cut down on screen time to avoid irreparably damaging their skin.

‘It’s (blue light is) quite short, it’s powerful. It kind of gets through your skin right away, and it’s everywhere,’ Dr Gunatheesan told A Current Affair.

‘Exposure to blue light, especially long, prolonged periods, you do get a bit more hyperpigmentation, so that brown discolouration that can happen.

‘We certainly see it predisposes to skin aging, mottling of skin and a bit of dehydration.’ 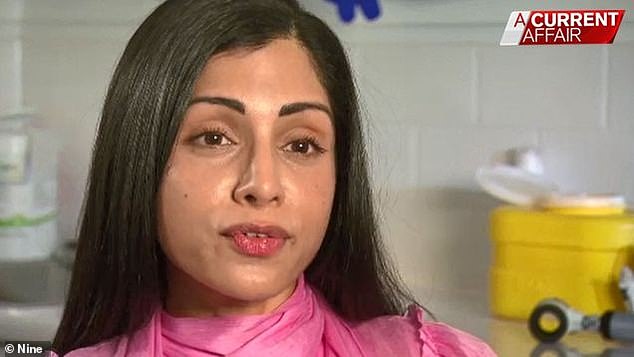 In addition to cutting down on screen time, Dr Gunatheesan said people should use tinted sunscreen and makeup with iron oxide as it is ‘the best visible light blocker’.

People can also turn down the brightness on their screens and use ‘night mode’ which changes the tint from a harsh blue to a soft yellow.

Dr Gunatheesan’s warning comes after Unilever scientists examined the effects of ‘blue light’ emitted by electronic devices on the skin and found it can cause premature ageing.

Five days of exposure to blue light for at least six hours per day can have the same impact on the skin as spending 25 minutes in the sun without cream, they found.

It takes just seven minutes to get a tan according to Dr Gunatheesan, meaning that people could be getting the equivalent of more than three tans a week from screens.

The study also found that screen use is a huge problem with 60 per cent of people now spending more than six hours per day in front of a device that emits blue light.

Dr Gunatheesan said more of her patients are now concerned with the long-term effects of blue light on their skin. 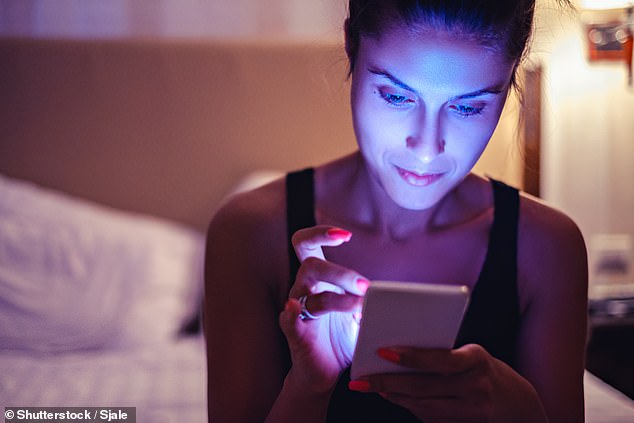 A woman uses a mobile phone emitting a strong blue light. People can reduce skin damage by turning down the brightness of their screens or using ‘night mode’, which changes the tint from a harsh blue to a soft yellow

Blue light exposure can cause hyperpigmentation and premature ageing but the exact amount of exposure is unclear, researchers say.

The study found that two in three people are unaware of the effect that blue light can have on their skin.

Blue light not only affects the skin but can also disturb our biological clocks interrupting sleep patterns. 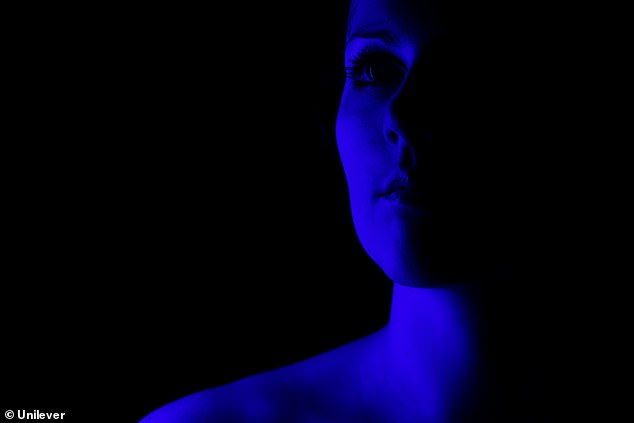 Researchers still don’t know the full effects of longer term exposure to blue light on the skin, but a number of studies, including this one, are trying to find out. Stock image

‘These are very active molecules which bind to skin and cause significant cellular changes. They affect the way DNA is repaired.’

She points to any potential harm likely to be linked to the ‘amount of time that we are spending on our phones and the fact we are holding them in direct contact with our skin’.

Unilever scientists found that 30 hours of exposure to blue light from smartphone or laptop screens can increase the inflammation level in skin cells by 40 per cent.

Samantha Tucker-Samaras, Global VP of Science & technology, Beauty & Personal Care for the firm said it can have a significant negative impact on wellbeing.

‘It is highly likely that exposure to blue light has increased this year, as many previously office-based workers have increased their time in front of a screen, as face-to-face meetings have moved to virtual.

‘People should be looking for skincare products loaded with antioxidants, as well as niacinamide and zinc oxide. Limiting screen time also helps, not only for our overall skin health, but our general wellbeing too.’

Leading Optometrist, Dhruvin Patel is a specialist in the impact of blue light on eye health – that is light produced by phone and computer screens. 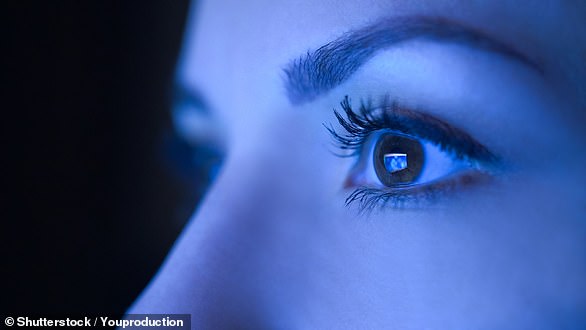 Researchers say exposure to blue light could increase the risk of damage to eyesight and make it harder to fall asleep.

Patel shared his tips for minimising the impact from blue light while working from home or using screens.

1. Work an arm’s length from the screen

Fully extend your arm and work from a distance – looking from your eyes to the end of your fingertips.

Use this as a minimum distance to reduce the stress on your eyeballs.

Simply put, every 20 minutes, look away from the screen for a minimum of 20 seconds at least 20 feet away.

This will help to reset your visual systems and eye through any long periods of screen work.

Height and level of your working screen can have a big impact on eye strain.

Research has shown that it is better for the screen to be located higher than the users’ watching level – the middle point should be 5-6 inches below the straight line of the users’ vision.

This makes the space between upper and lower eyelid more open, often resulting in dryness of the eyes.

Position the computer screen to avoid glare, particularly from overhead lighting or windows.

Use blinds or drapes on windows and replace the light bulbs in desk lamps with bulbs of lower wattage and intensity.

If there is no way to minimise glare from light sources, consider using an anti glare filter.

5. Put a post-it note on your screen titled ‘BLINK’.

Normally, in a minute, we blink up to 20 times. This is controlled automatically by our central nervous systems so we’re not conscious of blinking.

While on screens, this is actually reduced to 3-5 times a minute meaning our tear films cannot be maintained and the eye does not remain lubricated.

A post-it-note on your monitor saying ‘Blink’ should help you consciously make an effort to blink. It’s simple but definitely works.

Usually the biggest, newest phone is best, but not for your eyes. An iPhone X is 20 per cent brighter than an iPhone 6 and emits higher levels of blue light.

This is the difference of a 100 per cent increase in harmful blue light exposure!

7. Remember to switch off

I would suggest no digital devices or artificial lighting after sunset. If you’re like most people, you’re probably sending that last minute email or finishing your favourite show on Netflix before bed.

Try reading a book or start that meditation that you promised yourself you will do in the new year.

Dhruvin Patel says you shouldn’t assume that ‘night mode’ or ‘blue shade’ on devices is enough to counter the impact of blue light.

He said this ‘has been proven to not aid sleep compared to a screen’s normal output’ and so even with it enabled you should still avoid the screen after sunset if at all possible.

Patel founded a company called Ocushield that produces screen protectors to filter out blue light based on his research into the impact of the light source.