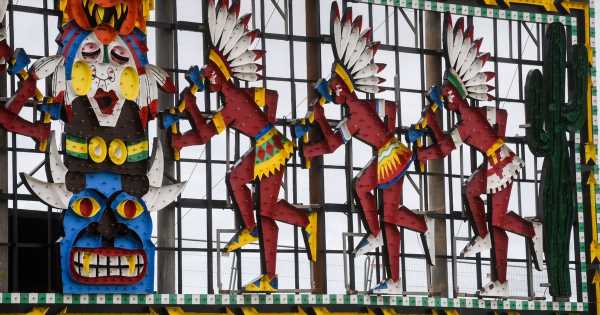 A 'Wild West' light display, dating back to the 1960s, has been removed from Blackpool Illuminations due to complaints that it is racist.

Blackpool Council received a complaint from Tony Perry, an NHS manager, author and member of the Chickasaw Nation tribe, in September last year, that it reinforced “racial stereotypes”.

He claimed the display – that depicts six men in headdresses around a totem pole – paints Blackpool “as a community that supports racism and discrimination” and now, after another citizen complained, the council have removed it entirely.

Tony told Lancs Live: “The council were very responsive to my concerns, I raised them last year and they responded quite quickly then to say they would take it under review.

"They have done that, they got in touch with me around a month or so ago and we chatted about where things were.

“They said they have made the decision to retire the tableau and wanted to work with me to try to find a Native American artist to try and replace it.

In September, Tony filed a complaint to every member of the council regarding the display.

In the filed complaint, he wrote: “I was dismayed to see stereotypical Native peoples dancing before a totem pole on the Visit Blackpool site for the Blackpool Illuminations. I understand there is a second illumination showing native Hawaiians in caricature as well.

“Native Americans have long been caricatured as an attempt to erase our culture, redefine our history and assimilate us with Euro-centric ideals.”

It later reads: “Examples of these attempts to define – and ultimately erase – Native peoples continue to this day in North America and abroad.

"Much of it is so insidious that those who do it don’t even know, and some believe that what they’re doing honours people like me.

“We see it in mascots, like the Exeter Chiefs rugby team, or with our images in lights, as the world sees with the Blackpool Illuminations.

“Showing such illuminations also does little to promote Blackpool as a welcoming community. Instead, it paints Blackpool as a community that supports racism and discrimination.

“These illuminations are seen by hundreds of thousands of people each year, which means that they spread stereotypes to other communities in the UK and beyond.”

He adds: "Its really not about just taking something away, I'm not saying lets shut it down and move on. I'm saying let's make something better."

The decision to take away the display was slammed by social media users, with one person on Twitter writing: “Woke generation strikes again… maybe we should just wipe out the entire history of the world and start again from today, apart from there is no history for this generation, apart from destruction of the past.”

Another added: “World’s gone mad, this nonsense has to stop.”