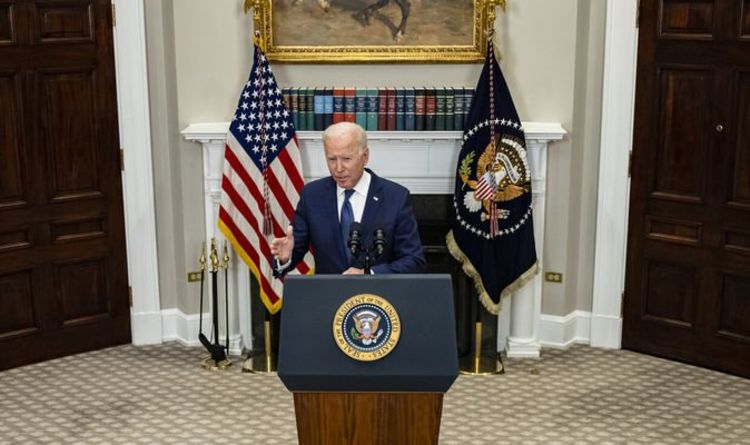 Joe Biden was plunged into the first political crisis of his tenure last week as the Taliban swiftly recaptured Afghanistan. The insurgent group took advantage of a hole in the country’s defences left by vacating US soldiers acting on the President’s plans. He has since defended his response, pledging to put Americans first as the Afghan nationals aided them fear for their lives, but some figures haven’t let him escape without a thorough dressing down.

Inevitably, one of the first figures to criticise the sitting President was his predecessor.

Efforts to prize the American presence from Afghanistan intensified under his term, with 2,500 troops remaining in the country as it ended in January this year.

But Mr Trump came out swinging regardless, branding Mr Biden’s takeover “one of the great military defeats of all time.”

He added it was a “total surrender”, and that Mr Biden had “dropped to his knees” for the Taliban.

US withdrawal from the Central Asian country would likely not have progressed quite the same without Mr Trump, whose policymaking on Afghanistan included a deal directly with the Taliban.

Former Prime Minister Tony Blair was amongst those criticising leadership across the pond.

Mr Blair, who followed the US to Afghanistan and Iraq in 2001 and 2003, was also quick to criticise Mr Biden.

The Labour figure, who has maintained one foot in politics since stepping down, branded Mr Biden’s decision “imbecilic”.

He said that while he had “enormous respect” for the US President, the withdrawal was a “serious mistake”.

He added: “You look round the world, and the only people really cheering this decision are the people hostile to Western interests.”

Boris Johnson and the British Government

Sitting politicians in Westminster also had some choice words for the US premier.

The Prime Minister is alleged to have privately referred to Mr Biden as “sleepy Joe”, an attack phrase coined by Mr Trump.

He also allegedly suggested the Government would have been “better off with Trump”.

Downing Street has denied these claims, branding them “categorically untrue”, however.

DON’T MISS
How Biden’s Afghanistan failure could let Trump back in White House – ANALYSIS
Cowardly conduct of pound shop President – NICK FERRARI – COMMENT
Do you agree with Blair that Biden is an ‘imbecile’ on Afghanistan? – POLL

Although not a household name like some of the above politicians, Ryan Crocker once served under Mr Biden.

He was ambassador to Afghanistan during the Obama administration when Mr Biden was Vice President.

Mr Crocker served a scathing indictment of the withdrawal process, damning his former boss’ policy for “a total lack of coordinated, post-withdrawal planning.”

He said the resulting predicament was a “self-inflicted wound.”

He added: “What President Biden has done is to embrace the Afghan policy of President Trump, and this is the outcome.”

Several prominent figures across the EU have also sprung to criticise Mr Biden.

Charles Michel, President of the EU Council, took to Twitter to commit the bloc’s resources to prioritise “women and girls” as the US withdraws.

She said the world has live “the great illusion” following Mr Biden’s ascension, adding: “We thought America was back, while in fact, America withdraws.”