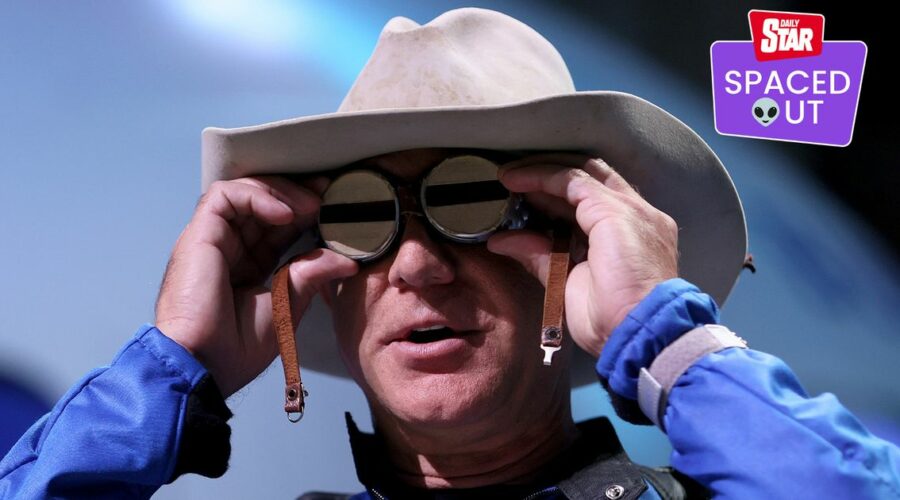 A new Space Race between the richest men on Earth promises to take humanity back to the Moon for the first time in almost 50 years.

The first Space Race began in 1957, when Sputnik 1 was launched from Baikonur, in Soviet Kazakhstan, kick-starting a struggle for technological supremacy between the USA and the USSR.

That epic, and mostly bloodless, conflict between the two great superpowers of the time effectively ended on July 20, 1969 when Neil Armstrong, commander of the Apollo 11 mission, stepped down from the Lunar Module Eagle and made a size 9½B footprint on the Moon’s surface.

But the bitter rivalry between Amazon founder Jeff Bezos and South African-born SpaceX boss Elon Musk makes the Cold War battle between Washington and Moscow look like a minor spat.

And, like that first off-world head to head, it will only end when astronauts from NASA's Artemis program land on the Moon in a ship built by a private contractor.

In 2004, Bezos and Musk met to discuss their dreams of building a reusable vehicle to ferry astronauts – and space tourists – into orbit.

But instead of pooling their resources to create a third-party solution to replace NASA’s ageing Space Shuttle fleet, they instead set off on parallel paths to build a truly reusable spacecraft.

According to Musk, "I actually did my best to give [Bezos] good advice, which he largely ignored."

The Tesla entrepreneur has regularly spoken out against Bezos.

In 2013, reacting to a complaint from Bezos’s space launch company Blue Origin about SpaceX hogging a NASA launchpad, Musk told Space News that he’d be happy to share the launch facilities with Blue Origin but that Bezos had “not yet succeeded in creating a reliable suborbital spacecraft, despite spending over 10 years in development.”

He added that while there was always a chance that Blue Origin could build a workable spacecraft but “frankly, I think we are more likely to discover unicorns dancing in the flame duct.”

Musk has continued to snipe at Bezos, most frequently via Twitter. Even though the Amazon founder is just seven years older than him, he even implied that Bezos was too old to be in the Space race, telling the New York Times “The rate of progress is too slow and the amount of years he has left is not enough, but I’m still glad he’s doing what he’s doing with Blue Origin.”

After the competition to build a next-generation Moon lander for NASA’s Artemis program ended with Musk winning the $2.9 billion contract, he couldn’t resist trolling his rival on Twitter, saying Bezos “can’t get it up (to orbit).”

Bezos’s Blue Origin team don’t seem to be seeing the funny side – attempting to take NASA to court for what it described as an “error” in its decision.

Bob Smith, chief executive of Blue Origin, said: “It’s really atypical for NASA to make these kinds of errors,” he told The New York Times. “They’re generally quite good at acquisition, especially its flagship missions like returning America to the surface of the moon. We felt that these errors needed to be addressed and remedied.”

The rival billionaires have different motives for wanting to travel into space.

Musk has repeatedly said that it’s dangerous for humanity to remain a “single planet species,” arguing that it’s only a matter of time before a giant comet – or a climate catastrophe – sends us the way of the dinosaurs.

He’s made it very clear that, if he gets his way, he’ll die on Mars.

The focus of Bezos’s bid to get off the planet is slightly closer to home. He believes that a series of orbital colonies will make life better on Earth.

He says it’s important to “look to the future … as a species and as a civilisation.” Developing the ability of large numbers of people to live and work in orbit “will solve problems here on Earth.”

One of Blue Origin’s more ambitious plans involves creating a series of artificial habitats in orbit around the Earth, each one potentially housing a million space colonists.

Some of these orbital platforms would be cities in space, while others might be used as off-world factories where heavy industry could operate without worrying about polluting the planet.

Those cities in space would remove any limit on humanity’s growing population – and more humans means more geniuses, according to Bezos: “We can have a trillion humans in the solar system, which means we would have a thousand Mozarts and a thousand Einsteins. This would be an incredible civilisation”.

But, he admitted to CNN, there are many today who see the billionaire space race as just “joyrides for the wealthy,” and say the huge amounts of money being spent on it could be better used here on Earth.

“They are largely right,” he admitted, adding “We have to do both. We have lots of problems here on Earth and we have to work on those.”

But with Blue Origin planning its next tourism flight on October 12, and SpaceX setting off for the ISS a few weeks later, any problems on Earth will have to wait a little while longer. This Space Race is still just getting started.