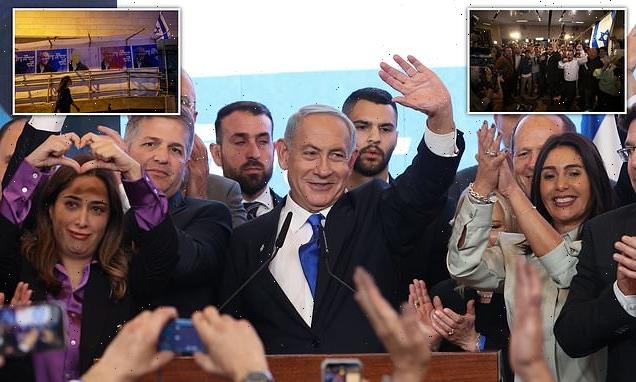 ‘King of Israel!’: Benjamin Netanyahu addresses cheering supporters as he looks set to return for a THIRD time as PM as election results come in – despite corruption charges

Supporters of Benjamin Netanyahu chanted ‘King of Israel’ as he addressed them today, with the veteran politician on the cusp of returning for a third time as Prime Minister – despite being on trial for corruption charges.

As of 8am GMT, 84 percent of the vote in Israel’s latest election had been counted. Initial results showed Netanyahu’s alliance with the extreme right taking a narrow lead – meaning he could be set for a dramatic comeback.

The margins appear wafer-thin, however, and previous elections have shown that slight adjustments during the count can make or break a government. 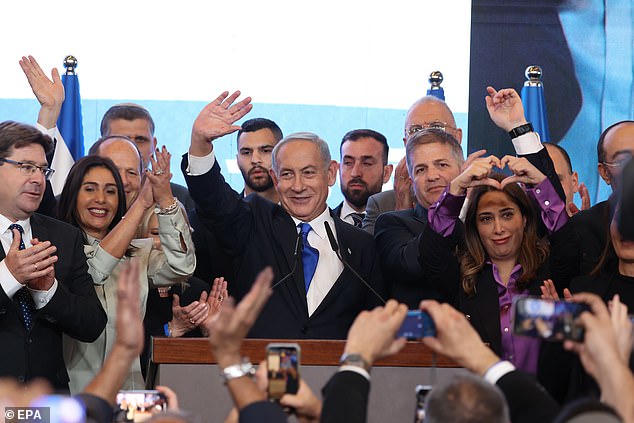 Supporters of Benjamin Netanyahu chanted ‘King of Israel’ as he addressed them today, with the veteran politician on the cusp of returning for a third term as Prime Minister

The election has focused largely on Netanyahu’s fitness to govern. On trial for a slew of corruption charges, Netanyahu, is seen by supporters as the victim of a witch hunt and vilified by opponents as a crook and threat to democracy.

Netanyahu’s fourth and fifth terms were overshadowed by investigations into alleged bribery, fraud and a breach of trust. Israel’s Police began investigating him in 2016, and recommended indictments. He was officially indicted in later 2019.

He denies all charges against him.

Addressing his supporters on Wednesday after all votes had been cast, the divisive Netanyahu said his Likud party had received ‘a huge vote of confidence’. As he did so, the crowd chanted ‘King of Israel’.

Caretaker Prime Minister Yair Lapid – the architect of the coalition which ousted Netanyahu last year – cautioned that ‘nothing is decided’. ‘(We) will wait patiently… for the final results,’ he told crowds backing his centrist Yesh Atid party.

While Israelis are split broadly between those who support or oppose Netanyahu, the former premier has been buoyed by votes for his extreme-right allies.

The Religious Zionism bloc of Itamar Ben-Gvir has made major gains and is expected to emerge as the third-largest party, behind Yesh Atid.

The controversial Ben-Gvir heralded the party’s showing as a ‘great achievement’, which is expected to hand the right-wing a majority in the 120-seat parliament. 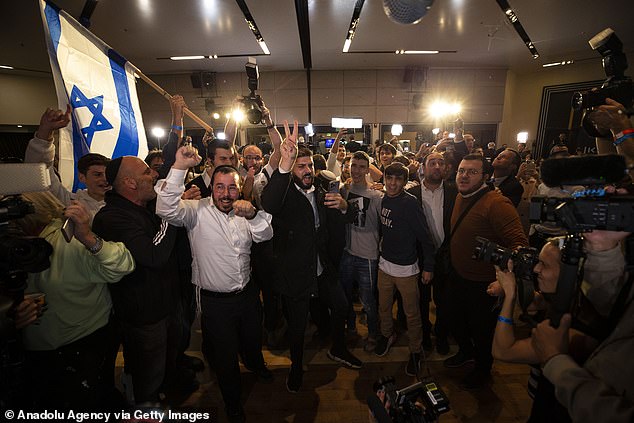 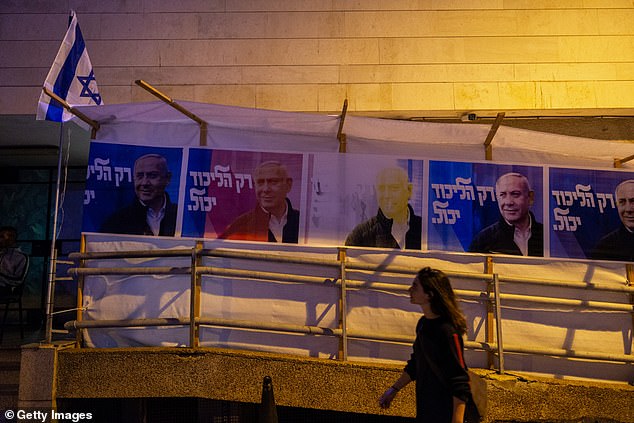 There is still hope for those opposed to the possible return of Netanyahu as Prime Minister. A number of smaller parties are teetering on the edge of the threshold required to win seats in parliament and could yet change the political arithmetic.

But the early signs were positive for the 73-year-old Netanyahu. The official count put his Likud on track for a first-place finish, with 31 seats, ahead of Yesh Atid’s 24.

Those figures, combined with current tallies for Religious Zionism and the two ultra-Orthodox Jewish parties backing him, would give the right-wing bloc 65 seats.

Such an outright victory would end the short reign of the motley coalition, which succeeded in ending Netanyhau’s record reign last year.

However, even if Netanyahu and his allies emerge victorious, it could still take weeks of negotiations for a coalition government to be formed.

Yael Shomer, a senior lecturer in politics at Tel Aviv University, told AFP news agency the count was ‘on pins and needles’. ‘It could be on a few thousand votes’ to impact seats and change the final result, she said.

Despite Israel’s election fatigue, voters came out in force and pushed turnout to its highest rate since 2015, topping 71 percent, according to official figures. 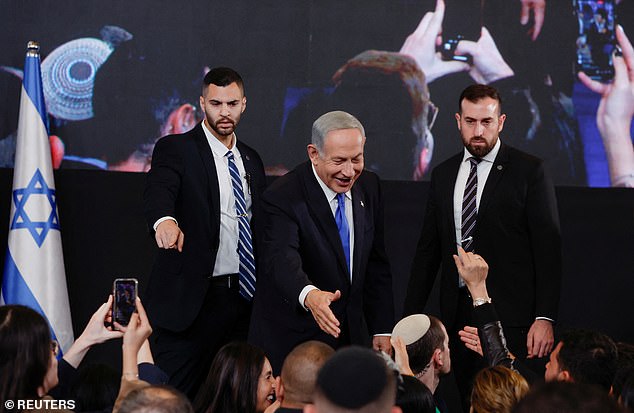 Early signs from the vote were positive for the 73-year-old Netanyahu (pictured addressing his supporters on Wednesday), who is on trial on corruption charges that he denies 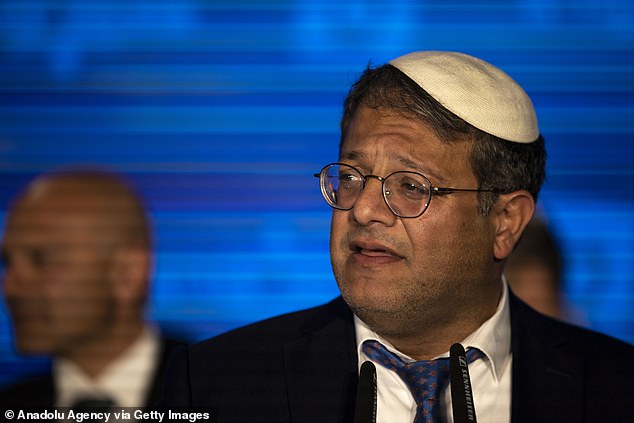 Who is Ben-Gvir? The far-right leader of Israel’s Religious Zionism bloc

Ben-Gvir is a disciple of a racist rabbi, Meir Kahane, who was banned from parliament and whose Kach party was branded a terrorist group by the United States before he was assassinated in New York in 1990.

But while Kahane was seen as a pariah, Ben-Gvir is one of Israel’s most popular politicians, thanks to his frequent media appearances, cheerful demeanour, knack for deflecting criticism and calls for a harder line against Palestinians at a time of heavy fighting in the occupied West Bank. Young ultra-Orthodox men are among his strongest supporters.

Ben-Gvir lives in the hard-line West Bank settlement of Kiryat Arba and is a strong proponent of settlement construction. He has described Arab colleagues in parliament as ‘terrorists,’ called for deporting those who are ‘disloyal’ and recently brandished a handgun in a tense Palestinian neighborhood of Jerusalem as he called on police to shoot Palestinian stone-throwers.

‘We want to make a total separation between those who are loyal to the state of Israel – and we don’t have any problem with them – and those who undermine our dear country,’ he said.

Muhammad Shtayyeh, the Palestinian prime minister, said the rise of Israel’s far right was ‘a natural result of the growing manifestations of extremism and racism in Israeli society.’

Whatever the final result, Ben-Gvir was described as ‘the big winner of this election’ by politics lecturer Julia Elad-Strenger.

‘He took from the haredim (ultra-Orthodox), from the Likud, of course new young voters and people who had noone to vote for,’ Elad-Strenger, from Israel’s Bar-Ilan University, told AFP.

The tireless campaigning of Ben-Gvir could see his alliance more than double its current presence in parliament, picking up 14 seats.

The 46-year-old is a disciple of a racist rabbi, Meir Kahane, who was banned from parliament and whose Kach party was branded a terrorist group by the United States before he was assassinated in New York in 1990. He has his eye on the public security portfolio, and wants Israel to use more force against Palestinians.

‘It’s time we go back to being masters of our country,’ he said following the vote.

Arab-Israeli lawmaker Aida Touma-Suleiman said Netanyahu might be on track to form a government ‘with fascists by his side’.

The vote was held against a backdrop of soaring violence across Israeli-annexed east Jerusalem and the occupied West Bank.

At least 29 Palestinians and three Israelis were killed in the territories in October, according to an AFP tally.

As the votes were being counted on Wednesday, an Israeli officer shot dead a Palestinian man in the occupied West Bank who the army said had rammed his vehicle at the soldier then got out of the vehicle to attack him with an axe.

CCTV video appeared to support the army account of the incident at a checkpoint near the city of Modiin on Wednesday.

The officer, who fired at the Palestinian after being knocked to the ground by the vehicle, was seriously wounded, the army said. Palestinian officials said they were informed by the Israeli liaison office that a 54-year-old Palestinian had been killed. 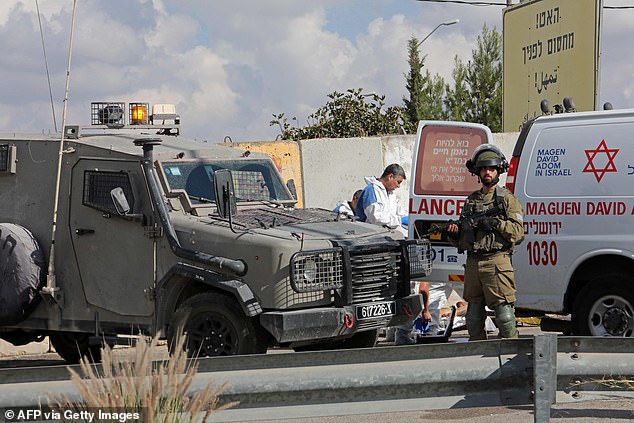 Pictured: Israeli security forces and emergency personnel at the scene of a reported ramming attack at the Maccabim checkpoint in the West Bank, near Israel’s central city of Modiin, on November 2, 2022. An Israeli officer shot dead a Palestinian man in the occupied West Bank who the army said had rammed his vehicle

CCTV video of Wednesday’s incident, which was circulated on social media, shows a van ramming a soldier against a checkpoint guard booth.

The driver gets out of the vehicle and makes stabbing motions over the soldier lying on the ground, who raises a rifle. The driver then collapses.

In a previous incident on Sunday, a Palestinian was shot dead after he carried out a car-ramming attack against Israeli soldiers in the West Bank, one of the territories which Palestinians hope will eventually form an independent state.

While many candidates cited security as a concern, none pledged to revive moribund peace talks with the Palestinians.

The coalition led by Lapid brought together the right and left, held together by bringing an Arab party into the fold for the first time. 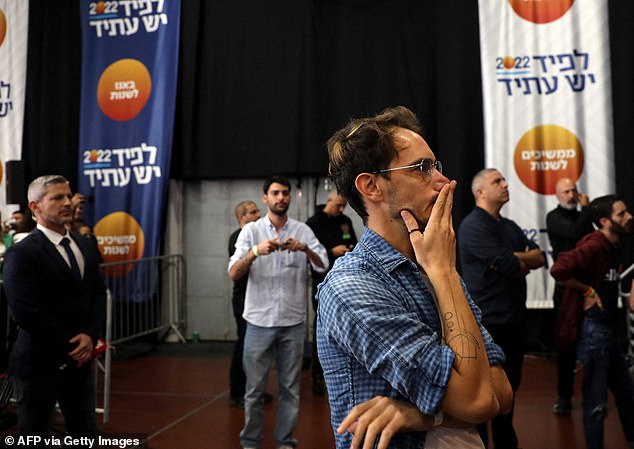 Pictured: Supporters of Israeli Prime Minister and head of the Yesh Atid party Yair Lapid react as they follow the election results at the party’s campaign headquarters in the coastal city of Tel Aviv on November 1, 2022 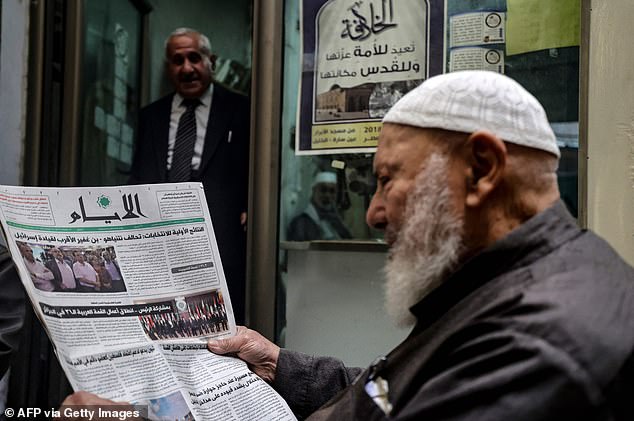 A Palestinian man reads the headlines of a local newspaper featuring the Israeli legislative at a shop in the occupied-West Bank city of Hebron, on November 2, 2022

The unlikely alliance was made possible after Mansour Abbas pulled his Raam party from a united slate with other Arab-led parties, paving the way for him to join the coalition.

But Raam’s pioneering support for a coalition was not viewed positively across Arab society, which makes up around 20 percent of Israel’s population.

On Wednesday morning, it remained unclear whether Raam would pass the threshold to hold onto its four seats.

For Shomer, the anti-Netanyahu bloc crucially failed to ensure alliances of smaller left-wing and Arab-led parties ahead of the vote.

‘If Lapid is the head of the centre-left bloc, he should have done like Benjamin Netanyahu and made sure all the parties under his bloc were in the best situation they could be,’ she said.

Who are the key players? Israel’s fifth election in less than four years

Netanyahu, currently opposition leader, paints himself as the consummate statesman and only leader capable of steering the country through its myriad challenges.

He was ousted last year after 12 years in power by the diverse coalition forged by Lapid.

The coalition was made up of nationalists who oppose Palestinian statehood, dovish parties that seek a peace agreement, as well as – for the first time in the country’s history – a small Arab Islamist party. The groups united over their distaste for Netanyahu.

But that coalition collapsed this spring because of infighting.

Netanyahu’s main rival is the man who helped oust him last year, the centrist caretaker Prime Minister Yair Lapid, who has warned against the nationalist religious alliance that would emerge should Netanyahu return to power.

The centrist Lapid, a former author and broadcaster who became premier as part of a power-sharing agreement, has portrayed himself as an honest and scandal-free change from the polarizing Netanyahu.

In his short term as caretaker leader, Lapid welcomed President Joe Biden on a visit to Israel, led the country in a brief military operation against Gaza militants and signed a diplomatic agreement with Lebanon setting a maritime boundary between the enemy nations.

Still, Lapid’s chances to return to leadership are shaky. He is relying on voters from Israel’s Palestinian minority, who make up one-fifth of the population. Their turnout is predicted to reach historic lows, but if they unexpectedly do come out to vote, that could slash the Netanyahu camp’s numbers.

The polls also showed far-right lawmaker Itamar Ben Gvir’s Religious Zionism as the third-largest party. Ben-Gvir is a disciple of a racist rabbi who was assassinated in the 1990s and has promised a hard line against the Palestinians.

Ben-Gvir is expected to seek a Cabinet position as head of the ministry that oversees police. Just last month he brandished a handgun in a tense Palestinian neighborhood of Jerusalem and called on the police to shoot Palestinian stone-throwers.

He has also called for deportation of Arab lawmakers.

After he cast his vote in the West Bank settlement where he lives, Ben-Gvir promised that a vote for his party would bring about a ‘fully right-wing government’ with Netanyahu as prime minister.

Ben-Gvir, who has been convicted of incitement for his anti-Arab rhetoric, had seen his clout rise in the polls ahead of the vote and has demanded a key portfolio should Netanyahu be tapped to form a government.