HAPPY, Texas — Randy Shields looked out at a sea of cattle at the sprawling Wrangler Feedyard — 46,000 animals milling about in the dry Panhandle air as a feed truck swept by on its way to their pens.

Mr. Shields, who manages the yard for Cactus Feeders, knows that at its most basic, the business simply takes something that people can’t eat, and converts it into something they can: beef. That’s possible because cattle have a multichambered stomach where microbes ferment grass and other tough fibrous vegetation, making it digestible.

But this process, called enteric fermentation, also produces methane, a potent planet-warming gas that the cattle mostly belch into the air. And with about 95 million cattle in the United States, including more than 25 million that are fattened for slaughter each year at feedlots, the methane adds up.

Researchers within and outside the industry are working on ways to reduce emissions from fermentation, through feed supplements or dietary changes. Other efforts aim to lower emissions from the animals’ waste — a source of methane as well as another powerful greenhouse gas, nitrous oxide — through improved manure storage and handling.

In the United States, cattle are far from the largest source of greenhouse gases, which include carbon dioxide, methane and others. Their total contribution is dwarfed by the burning of fossil fuels for electricity, transportation and industry. But livestock are among the largest sources of methane, which can have 80 times the heat-trapping power of carbon dioxide although it persists for less time.

Estimates vary, in part because animal emissions are more difficult to quantify than, say, flue gases at a power plant. But enteric fermentation by beef cattle accounts for nearly 2 percent of total emissions in the United States, according to the Environmental Protection Agency. 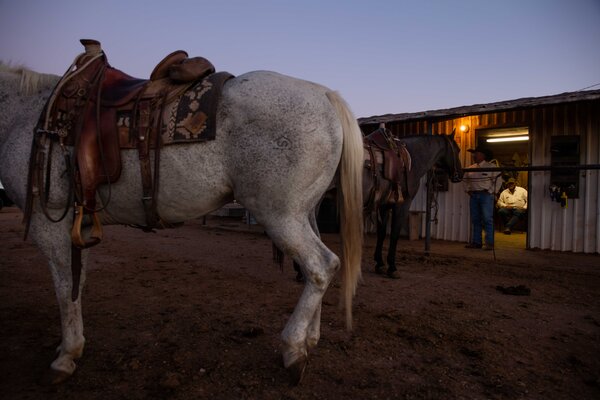 In effect, the animals are recycling carbon over a short time frame, so if the cattle population remains roughly the same, the contribution to warming remains about the same. “It’s leaving the atmosphere as fast as it’s coming,” said Alan Rotz, a researcher with the Department of Agriculture who has studied emissions from beef production.

The beef industry points out that, rather than remaining the same or increasing, the overall cattle population in the United States has declined by more than 25 percent since peaking in the 1970s, mostly because of efficiency improvements. But cattle populations are growing overseas, as nations become more affluent and beef consumption increases.

“For the U.S., we’re probably not adding methane to the atmosphere” from livestock, Dr. Rotz said. “But you add more methane as you add more animals, as we are doing globally.”

And even in the United States, with overall greenhouse gas emissions that are second only to China, making a dent in cattle emissions would have an effect.

Cargill Corporation, the food and agriculture giant that supplies feed to the beef industry, feedlots and others, is one of many companies doing research on substances that could be added to reduce methane emissions, said Heather Tansey, a director of sustainability at the company.

Cactus Feeders, which moves 1.1 million cattle a year through its 10 feedlots, designates about one-quarter of its pens at the Wrangler lot for studies on topics including the effects of dietary changes and ways to cut emissions from manure.

“There’s a need for work to be done in this area,” said Kenneth Casey, a scientist at the Texas A&M AgriLife Research and Extension Center in Amarillo, who was measuring the effects of rainfall on nitrous oxide emissions from manure in one of the Wrangler pens last month.

Jim Friemel, who with his wife, Melanie, owns and runs an independent feedlot in Hereford, Texas, that is half the size of Wrangler, doesn’t devote space to research. But he’s heard about melting ice sheets, rising sea levels and other accelerating effects of climate change, and would feed his 20,000 head of cattle a dietary supplement to reduce methane emissions if one were available at reasonable cost.

The emissions efforts are part of a broader push to make beef production more sustainable, including issues of water and land use. The work has taken on more urgency as the industry has come under pressure from environmentalists and others who say that to help conserve resources, the world must eat less meat.

In a report last year, for example, the EAT-Lancet Commission, an international group of scientists, recommended a 50 percent reduction in global consumption of red meat and some other foods by 2050.

In the United States, emissions have been affected by a major dietary change introduced decades ago. Feedlot cattle eat a diet in which corn or other high-energy grains account for up to about half the feed. This, plus reduced movement in the pens, helps the cattle fatten, producing the kind of well-marbled beef that consumers like. Studies have shown that a high-grain diet produces less methane.

But the microbes that break down corn are different from those that work on grass, so cattle have to be monitored carefully for bloat or other health problems. And farming of corn uses a lot of water, adding to concerns about resources. 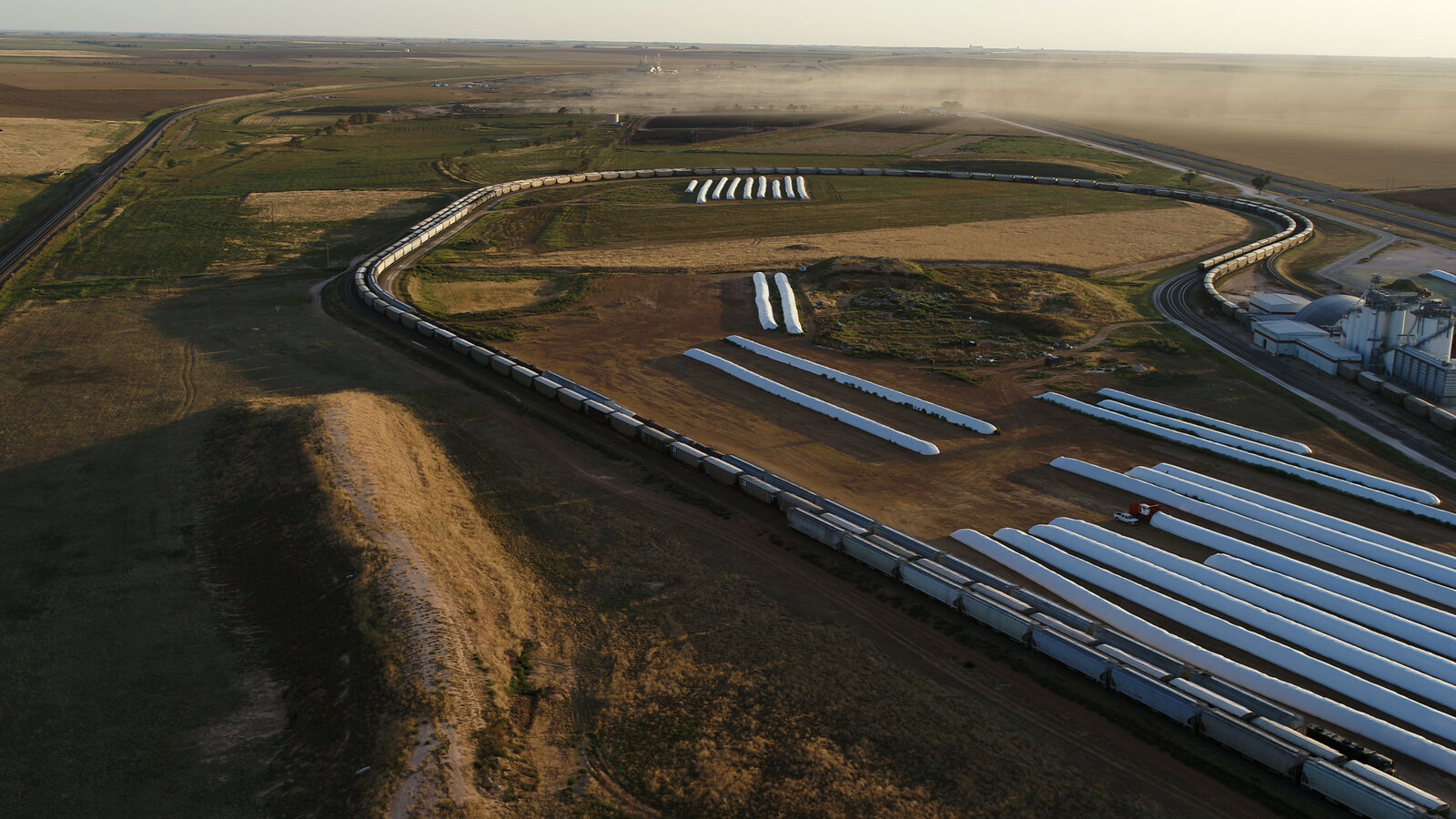 Changes in the beef industry have reduced emissions in another, very basic, way: By spending time at a feedlot rather than grazing, cattle now reach their market weight much faster. They are alive, and belching methane, for a shorter time.

“Our system is exponentially more efficient than it was 40 years ago,” said John Richeson, a professor of agricultural business at West Texas A&M University in Canyon. Efficiency, he added, “directly impacts the carbon footprint.”

Paul Defoor, co-chief executive of Cactus Feeders, said that further reducing greenhouse gas emissions could make good business sense, because less of the carbon in feed would escape as methane and more would be used by the growing animal. “I want to capture all those carbons that I can,” Mr. Defoor said, “in the form of beef.”

The evidence of the industry’s transformation permeates the Texas Panhandle, where the dry conditions, relatively mild winters and not-too-hot summers have made it a center for cattle feeding.

Feedlots are the most obvious sign. Mr. Friemel’s yard, F-Troop Feeders, is one of several dozen in and around Hereford, which calls itself the beef capital of the world. Of Cactus Feeders’ 10 feedlots, seven are in the Panhandle, and the others are not far away in Southwestern Kansas.

There are other indications of the industrial scale of beef production here. Huge grain elevators, which store corn and other feed, dot the landscape, as do the large, windowless slaughterhouses, staffed largely by immigrant workers. Cattle trucks arrive there all day. Plants that make feed for the cattle receive ingredients by the trainload.

Even the corn ethanol industry has set up plants here, far from the Corn Belt, in large part because the waste from the process, called distiller’s grains, is sold by the truckload for cattle feed.

The industry’s transformation began with feedlots. The idea of penning cattle so they expend less energy, are easier to care for and can be fed a controlled diet was conceived a century ago. But it was not until the 1960s that the idea really took hold, with large-scale lots.

Before feedlots, beef cattle would graze year-round. But all the energy expended wandering, and the difficulties of winter feeding, when cattle at best could only maintain weight, made the process of fattening them take longer.

“Today when that growing season is over, those cattle can roll into here,” Mr. Defoor said. In about six months at a feedlot like Wrangler, a steer or heifer eats about 35 pounds of food a day (40 percent of which is moisture) and gains more than 3 pounds a day, reaching a typical market weight of more than 1,300 pounds.

Most cattle now graze only for a limited time, beginning as a calf. After about six months they are often sold to what is known as a stocker operation, where they graze on wheat or other grass crops. Typically after another six months or so, as yearlings, they move to a feedlot.

There are still some cattle that are fed on grass from start to finish (although even some meat labeled “grass fed” may have had a different diet toward the end). Because it takes longer, the animals live longer, and every additional day they are alive they are producing more methane.

Grass feeding is not as efficient, Mr. Richeson said. “You don’t get nearly the growth. It takes six months, nine months longer.”

The centerpiece of every feedlot is a mill, where the corn or other grains are steamed and rolled into flakes to improve digestibility. The grain is then mixed with other ingredients and delivered by trucks to troughs in the pens.

Mr. Friemel adds a lot of silage — fodder that is stored while still green — which he gets from nearby fields. One day last month, he was buying corn silage from a farmer whose crop had been damaged by hail. Trucks hauling the sweet-smelling mix of chopped-up stalks, leaves and ears arrived throughout the day. Mr. Friemel, operating a giant tractor, piled it up for storage.

Cactus Feeders uses silage, and adds other ingredients as well. Common ones include distiller’s grains from ethanol plants and a Cargill product called Sweet Bran that is a byproduct of making corn syrup. 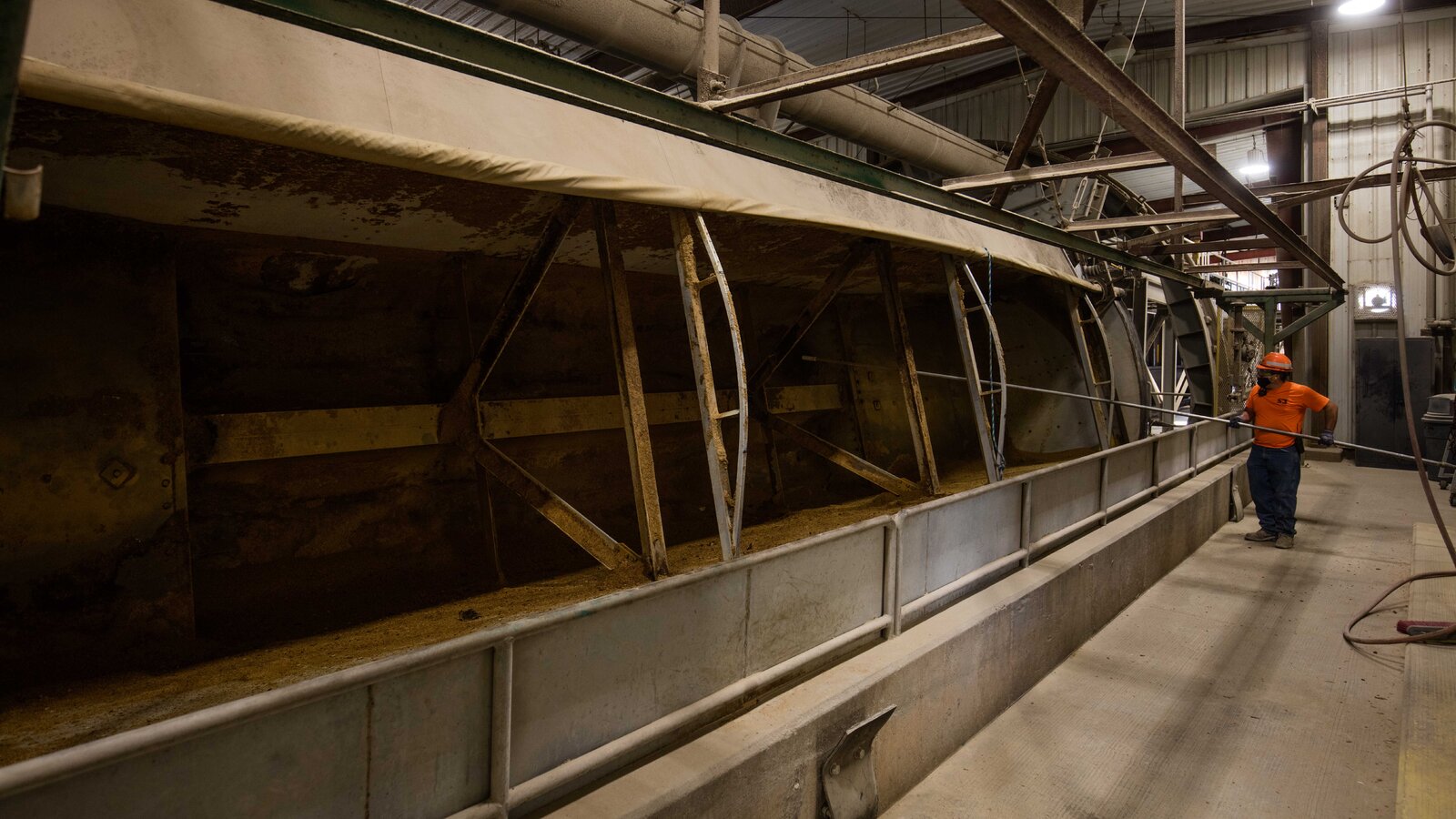 But the company’s buyers scour the market for other products that the cattle can eat. Depending on price and availability, this can include things like lint residue from ginning cotton, or “yellow grease,” re-rendered oil from restaurant fryers.

“Thank goodness ruminants can use it, because otherwise I don’t know what we’d do with all this stuff,” Mr. Defoor said. In all, he said, even with the reliance on corn, 60 percent of what Cactus feeds to its cattle is inedible by people.

Feedlots also produce a lot of manure and urine — hundreds of thousands of pounds a day of waste at a typical lot like Wrangler. But the arid conditions, and trampling by the animals’ hooves, leaves a smooth, dry surface.

On hot summer days the manure can become too dry and dusty, and coupled with the Panhandle winds results in a “brown cloud” that can greatly affect air quality locally. While most of the methane emissions at a feedlot come directly from the cattle, manure also emits methane as well as nitrous oxide, which is an even more potent greenhouse gas.

Dr. Casey, the Texas A&M researcher, has studied emissions at the Wrangler yard and elsewhere for more than a decade, often collaborating with scientists from the Department of Agriculture.

On this day his equipment was measuring nitrous oxide emissions from the surface of an empty pen whose occupants had been shipped to a slaughterhouse days before. Nitrous oxide emissions spike after it rains, but the gas largely forms in the top inch of the manure, where it is less compact.

“We’re looking at mitigation strategies,” Dr. Casey said. “What could a manager potentially do to reduce emissions?”

His research suggests one possibility — scraping off the top layer of manure if rain is in the forecast. But that might not be feasible across the hundreds of acres of a feedlot. And it may lead to another problem: more methane emissions from the compact layer underneath.

“That’s the issue,” Dr. Casey said. “In trying to control one thing, you’re making the other worse.” 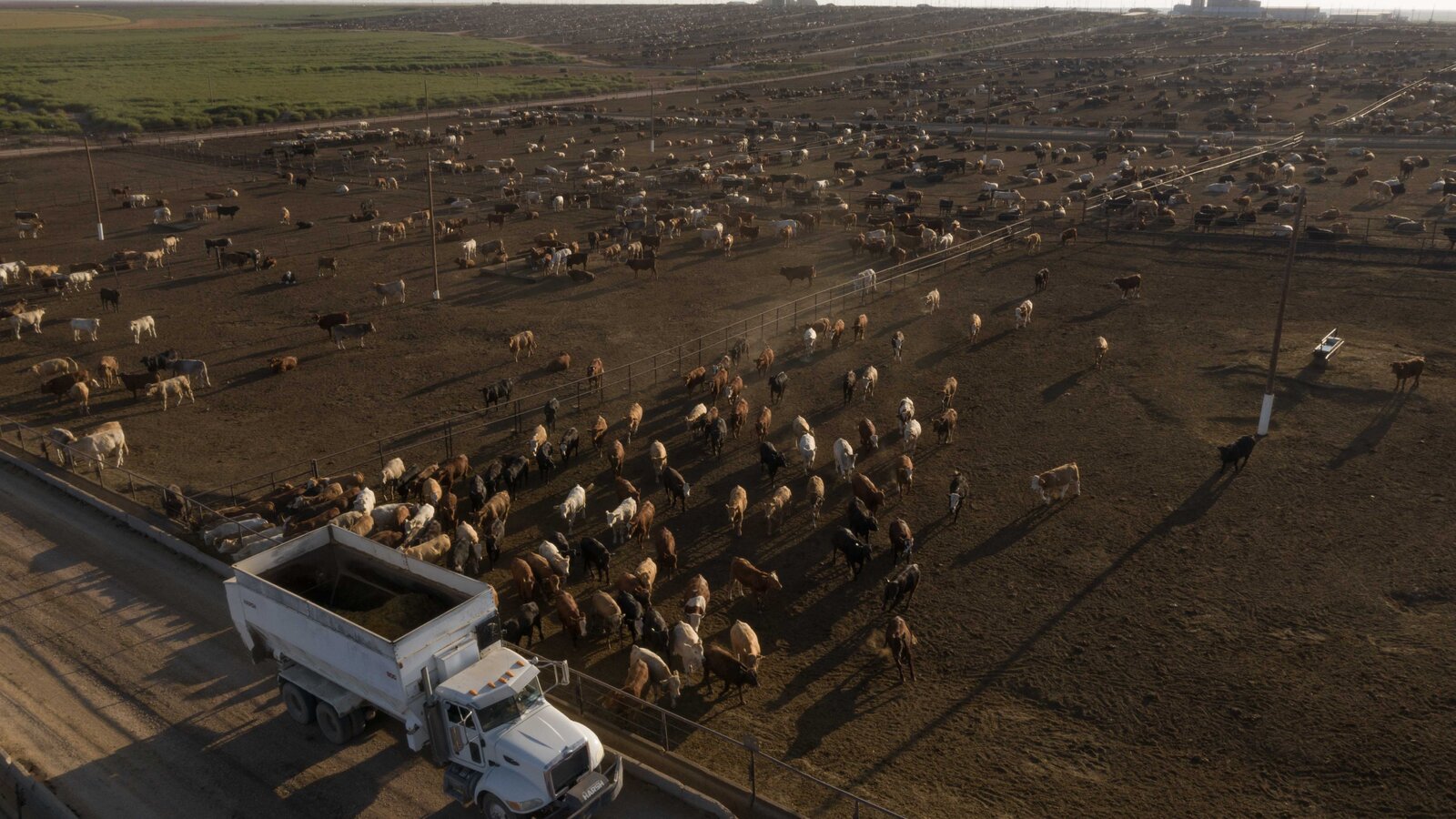