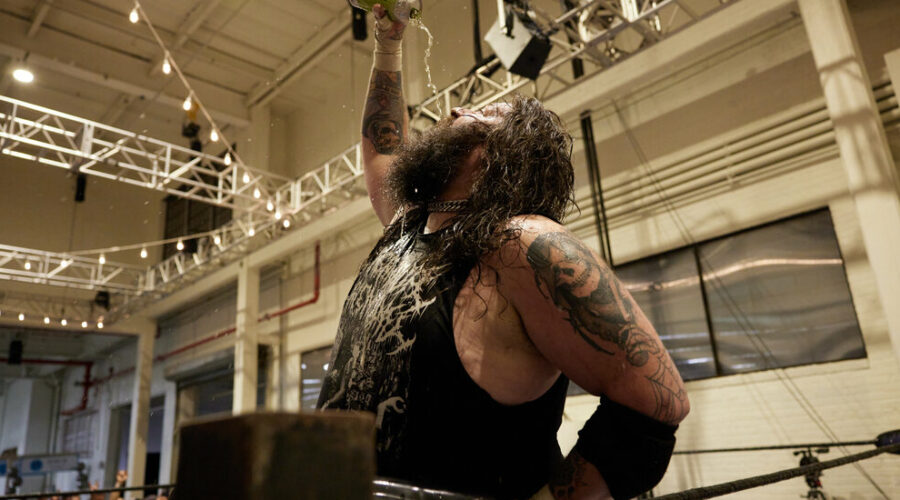 The wrestler Casanova Valentine, who also works at Other Half Brewing, had the idea to incorporate wrestling into the brewery’s themed festivals. Such beer and wrestling partnerships are catching on around the country Credit…Jon Premosch for The New York Times

On a broiling Friday night in Brooklyn, beer fans gathered to try cold I.P.A.s from scores of breweries and blow off steam by screaming. In most contexts, raucous shouting is discouraged. But at Other Half Brewing’s Green City Championship beer festival, held this month at ZeroSpace, a sprawling events venue in Gowanus, crushing beer while cutting loose was precisely the point of the event’s entertainment: professional wrestling.

Every 30 minutes during the four-hour festival, which also ran a Saturday edition, an audience holding hazy beers assembled around a wrestling ring to cheer and jeer. Spandex-clad wrestlers with stage names like Manbun Jesus, Rex Lawless and Casanova Valentine performed body slams and leaped off ropes, egging on spectators and occasionally inflicting performative injury with arm twists and traffic barrels.

The percussion of bodies bouncing off the mat steadily boomed through the crowd, drawing hops-fueled roars that grew louder as the evening grew later. 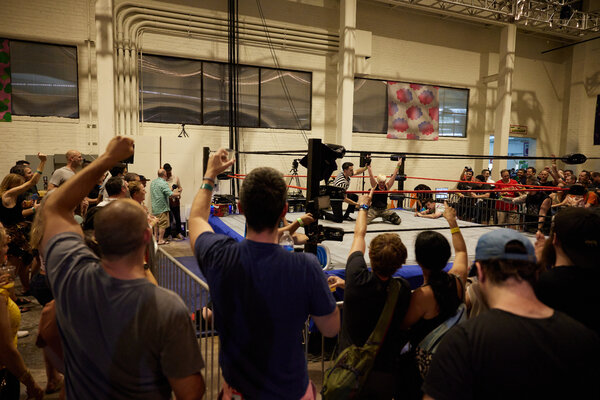 “Being a little bit more lubricated and loose just makes it that much better,” said Mike Bruckenthal, 30, who lives in Brooklyn and works in sales.

Craft beer and wrestling are increasingly performing as a tag team. The energetic Brooklyn event is one of many around the country, and just one way that brewers and wrestlers are joining forces to piggyback on, and amplify, each other’s popularity.

Historically, the two worlds lacked such a close-knit connection. “Growing up watching wrestling, I didn’t see a lot of intoxication at shows,” said longtime wrestling journalist Keith Elliot Greenberg, who wrote for World Wrestling Entertainment’s magazines for 22 years, starting in 1985. “Wrestling was intoxicating on its own. If you went to wrestling and couldn’t get a beer, you still left buzzing.”

Professional wrestling leagues were also reluctant to associate with beer “because they were marketing to children,” added Mr. Greenberg, the author of the forthcoming book “Follow the Buzzards: Pro Wrestling in the Age of Covid-19.” Instead, advertisements featured wrestling personalities like Macho Man Randy Savage snapping into Slim Jim jerky, while Andre the Giant hawked Honeycomb cereal.

Fans cheered on the beer-spilling performances, but beer companies were less enamored of Mr. Austin’s edgy persona. “We made a pitch to one brand,” Mr. Austin said, but “they wouldn’t touch us with a 10-foot pole.”

Cultural attitudes have evolved, though. Many craft brewery taprooms welcome customers of every age, and wrestlers have transcended the top ropes to become entertainment superstars. They are now joining other celebrities in creating alcoholic beverage brands, like Dwayne Johnson’s Teremana Tequila and Capa Cagna wine from the World Wrestling Entertainment star Leah Van Dale, who goes by the ring name Carmella.

Making a beer seemed almost preordained for Mr. Austin, who retired from wrestling in 2003. While living in Los Angeles, Mr. Austin started exploring craft beers, and a mutual friend introduced him to the president of El Segundo Brewing, Rob Croxall. They hit it off, and teamed up to design the citrusy, appealingly bitter Broken Skull I.P.A. The beer debuted in 2015, and in March El Segundo added Broken Skull American Lager.

“We haven’t been able to keep up with the absolute demand,” Mr. Croxall said.

Like following certain bands or sports teams, embracing a specific beer “can help a wrestler round out their persona,” said Nick Reely, the vice president of marketing for Pabst Brewing Company, makers of Pabst Blue Ribbon lager.

Pabst partners on events with Game Changer Wrestling, a popular promoter that stages wrestling matches, and sponsors the wrestler Matt Cardona’s podcast, “The Major Wrestling Figure.” Mr. Cardona drinks PBR during ring entrances, hits opponents with PBR 12-packs and filmed a PBR commercial with fellow wrestlers. “It’s part of our community and our brand,” he said.

Wrestling promoters are finding success in events at breweries, which often offer ample space — a ring and its surrounding guardrails alone can require 400 square feet — and enthusiastic fans. “We get these crowds that just want to go let loose,” said Nelio Cuomo Costa, the executive director of Coastal Championship Wrestling, which produces the monthly Bash at the Brew matches at Unbranded Brewing in Hialeah, Fla.

Matches can draw some 700 fans, many drinking Triple Chokeslam I.P.A., an Unbranded collaboration, as action unfolds amid brewing tanks and kegs double as props. “We’re embracing being inside a brewery,” said Mr. Costa, who has since added the Saturday Night Slam events at Miami Brewing in Homestead, Fla., and is searching for a third brewery venue.

“Breweries love it because people are going to be drinking heavily,” Mr. Costa said.

Releasing new beers was once enough for breweries to entice customers to get in line for four-packs, but “great beer by itself isn’t enough anymore,” said Chris Rippe, an owner of Bierstadt Lagerhaus in Denver. “There has to be an experience.”

For breweries, wrestling can also solve the kid conundrum. Taprooms might welcome children, but what’s an 8-year-old to do while Dad drinks a double I.P.A.?

At Southern Star Brewing in Conroe, Texas, about 40 miles north of Houston, matches from Texas All-Star Wrestling and the all-female Mission Pro Wrestling can draw as many as 300 people, including quite a few families.

Southern Star’s general manager, Keith Amador, said: “Seeing little girls yelling and screaming with their dads or sons with their fathers yelling at the wrestlers is so cool.”

At first, the Brooklyn wrestler Casanova Valentine found it difficult to draw friends to his Long Island performances, so he started wrestling in no-ring-needed “death matches” in New York City bars and clubs. “I brought the wrestling to them,” said Mr. Valentine, who prefers to go by his stage name rather than his birth name, Christian Salvatore Taranto.

Other Half hired Mr. Valentine in 2017 (“I’m a big dude, and they just need a big dude who can lift stuff sometimes,” he said), and he soon saw an opportunity to mix his passion with his workplace. Wouldn’t a beer festival be more exciting with wrestling?

“Beer festivals can be boring if you’re standing in line and getting a beer and then going into the next line,” said Andrew Burman, Other Half’s chief operations officer.

Since the first edition of the Green City festival in 2018, Mr. Valentine has worked with New York Wrestling Connection to program wrestling at Other Half’s festivals, including Pastrytown, its celebration of rich, culinary-inspired beers, such as sour ales and stouts.

“People are ready to have fun,” Mr. Burman said. “You check your reality at the door.”

Randy and Suzanne Tyson opened DDT, a wrestling-themed bar in Brooklyn’s Park Slope neighborhood, in early 2020 to capitalize on the “revival for wrestling not necessarily being an avenue of entertainment for children,” said Mr. Tyson, a lifelong wrestling fan. “We really wanted to be part of wrestling tourism in New York City.”

European wrestling fans regularly visit, and loyal regulars arrive from Staten Island, the Bronx and Queens to crush Broken Skull I.P.A. and catch marquee matches on TV. “I can’t even advertise anymore because we get that busy,” Mr. Tyson said.

Televised wrestling might be a draw, but it’s tough to top watching live wrestlers perform pile-drivers and rattle rings as onlookers jeer and cheer.

Back at Green City’s final Friday match, Casanova Valentine fended off his challenger in a bruising brawl featuring a trash can, ladder and other construction equipment. Fittingly, he celebrated by climbing onto the ropes and chugging a beer, soaking up the drinking crowd’s full-throated approval.

“It’s like going to the movies, but it’s a real-life performance and you get to drink,” Mr. Cardona said. “What’s better than that?”

24/06/2022 World News Comments Off on Beer and Body Slams, as Craft Brewers and Wrestlers Get in the Ring
Markets