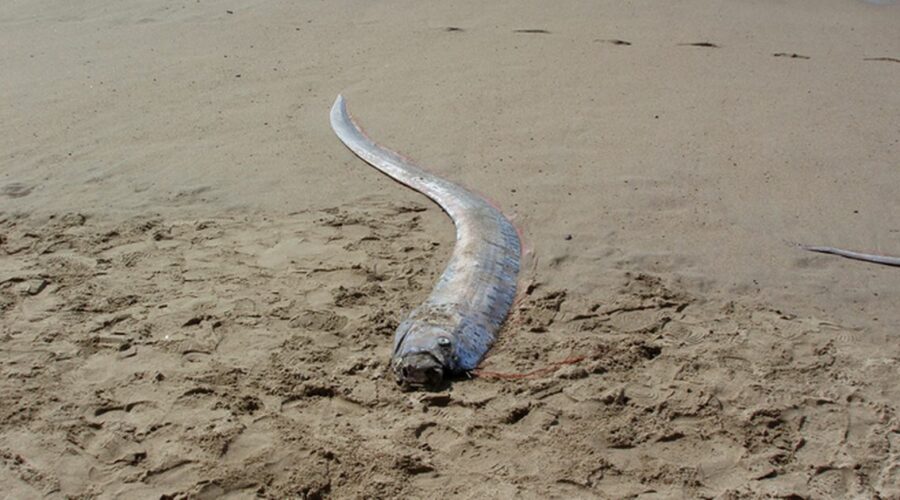 A massive snake-like fish has been discovered for the second time in a matter of weeks.

The first time around, fishermen in Chile bagged the 16ft-long sea beast – and now one’s been snared off the coast of Mexico.

Silver in colour, footage of the monster has emerged showing it on the back of a truck in Sinola, Mexico, on October 5.

With a long flat body, it looks like it's part snake, part fish, part eel.

It is in fact a deep-sea oarfish, a monster used to operating in the low-light world between 200 and 1000 metres below sea level.

A genuine creature of the deep, sightings of the oarfish are rare – so rare in fact that one particular tradition from Mexico claims that a sighting means bad news is around the corner.

It is the view of some that seismic shocks deep in the ocean push the creatures towards the surface and that these shocks could go on to trigger earthquakes.

It’s not just Mexican folk law that has concerns about oarfish sightings.

In Japan, 'Ryugo No Tsukai' is the name for the strange-looking swimmer.

This translates to “message from the sea god’s palace.”

In a similar vein to the tale from Mexico, there have been connections made in Japan between the fish and earthquakes.

The legend goes that a giant sea snake that lived under the country called Namazu caused earthquakes when it surfaced.

Evidence for the earthquake theories seems limited, however, with the Geophysical Institute in Ecuador pointing out that an earthquake and the sighting of a giant oarfish in coastal waters have only happened at the same time once on record.

Speaking to The Japan Times, Kiyoshi Wadatsumi of not-for-profit e-PISCO did however say that creatures living deep in the sea are: “More sensitive to the movements of active faults than those near the surface of the sea”.

The creepy critters have a red dorsal fin running the length of their spines, producing a sinister two-tone colour scheme with their silvery skin.

If you were thinking about eating them, then don’t bother – LadBible reports they taste like “gelatinous goo”.