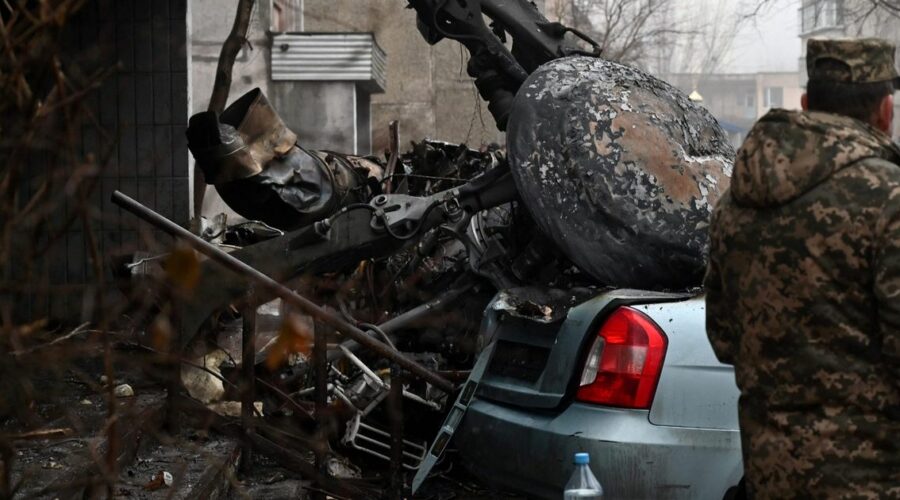 A horror helicopter crash near a kindergarten has seen 17 people killed in the Ukrainian capital of Kyiv.

The helicopter crashed in the small town of Brovary, around 20km north east of Kyiv.

Sadly, the kindergarten was filled with children and staff at the time, Ukrainian officials confirmed.

Ukraine's Interior Minister Denys Monastyrsky was on the helicopter, which was flying through fog, at the time and died in the crash.

The 42-year-old was given a third class order of Merit by Ukrainian President Volodmyr Zelenskyy last year for his services to Ukraine.

Of the 17 killed, two of those were children, and 22 more people – including 10 children – are now in hospital.

The area has been closed off and an investigation is underway – no clear cause of the crash has been said yet.

The Kyiv Post reported: “The leadership of the Ministry of Internal Affairs died as a result of the helicopter crash in Brovary: the minister, the first deputy minister and the state secretary.”

And Kyiv region governor Oleksiy Kuleba said: “At the time of the tragedy, children and staff of the institution were in the kindergarten.

“Everyone has now been evacuated. There are casualties.”

Several of the children injured in the crash were being treated for shrapnel wounds and burns, local media has claimed.

The helicopter was reportedly a Eurocopter EC225 Super Puma, which is a long-range passenger transport helicopter with two engines and space for 24 passengers and two crew.

It is not know how many were on board the flight at the time.

The craft was known to be owned by Ukraine's emergencies ministry.

President Zelenskyy has yet to comment on the horror crash, despite one of his closest allies Denys Monastyrsky said to be among those killed in the tragedy.