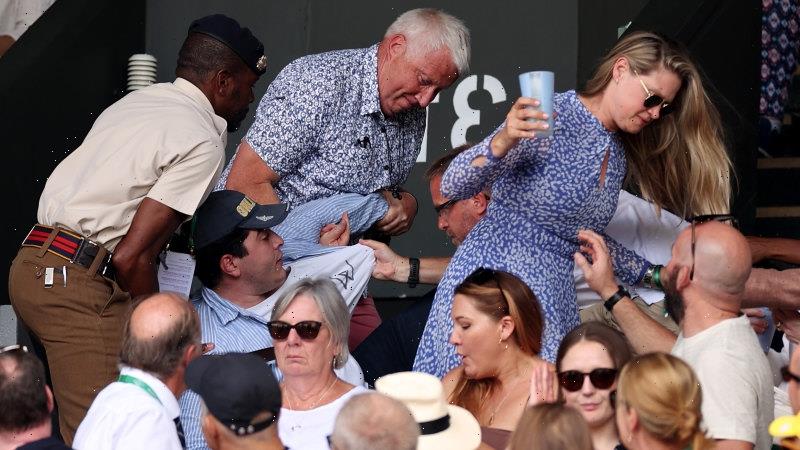 Pavlou was tackled to the ground and hauled out of centre court by security during the third set, with the commotion clearly audible from the stands. 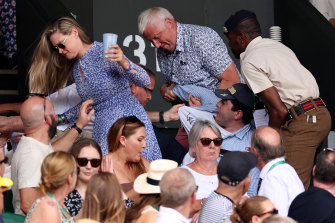 Security staff and spectators remove the 22-year-old from the stands during the men’s final at Wimbledon. Credit:

The 22-year-old Queenslander contested May’s federal election as an independent candidate for the senate ostensibly to challenge the Chinese Communist Party and any Australians who do not denounce its reign.

Pavlou rose to his feet during the match and held up a sign and shouting: “Where is Peng Shuai?”

He said that his treatment got physical during the men’s singles final.

“Just got thrown down the stairs by Wimbledon security for holding up a sign saying #WhereIsPengShuai,” he said.

“One of them smashed my head into the wall.” Pavlou then posted a photograph of his wrist which was red. “My wrist after security threw me down the stairs at Wimbledon for holding up a sign saying #WhereIsPengShuai one of them smashed my face against the wall,” he added.

The whereabouts and well-being of Peng – a former doubles number one and doubles champion at Wimbledon – became a cause for concern worldwide when she accused China’s former Vice-Premier Zhang Gaoli of sexual assault last November.

Her social media post was subsequently removed and she disappeared from public view for three weeks, leading the women’s tour to suspend all of its tournaments in China, with the WTA not returning to the country this year. 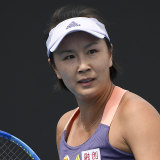 Wimbledon officials have rejected the claim that excessive force was used.

An All England Club spokesperson said: “A spectator was removed from Centre Court after disrupting play by shouting, running down the stairs and causing a nuisance to their fellow spectators. The individual was removed by security colleagues and escorted off the grounds.“

Both tennis players stopped during the scuffle in the stands to find out what was happening in the crowd.

Pavlou later apologised for interrupting the match, writing on social media to critics: “I’m sorry that I disrupted the match for 30 seconds, I tried to pick a break in between games to silently hold up my #WhereIsPengShuai sign but security immediately crash tackled me which is why I shouted out so people would hear Peng Shuai’s name on the broadcast.

Pavlou and fellow anti-CCP agitators were involved in protests at the Australian Open in Melbourne earlier this year. Pavlou posted his mobile phone footage on social media of friend Max Mok and another spectator being confronted by TA security and later, Victorian police, at Melbourne Park.

Updates on Peng’s condition have become increasingly uncommon since the initial outrage relating to her November 2021 claims.

Speaking to 60 Minutes Australia in February, Victor Gao, the vice president of the Centre for China and Globalisation, suggested Peng couldn’t have been assaulted because she’s too athletic, adding that to further the claims would be “indulging fantasy.”

On Friday, Pavlou had urged people not to forget Peng. “This is a former Wimbledon champion, how can the world forget her?” he said.

“We want Wimbledon to actually acknowledge she exists. Just like the Australian Open, Wimbledon authorities are trying to brush Peng Shuai’s disappearance under the carpet for the sake of protecting their massive Chinese corporate sponsorship deals.

“Wimbledon security kept telling me how much sympathy they felt for my protest today while simultaneously demanding I remove my sign or face police arrest. Are their Chinese corporate sponsorship deals more valuable than Peng Shuai’s safety?“