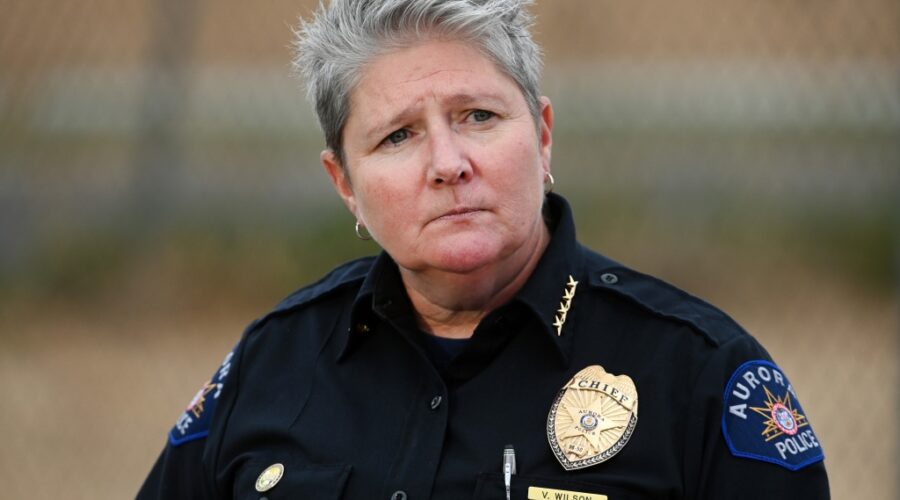 Aurora’s city manager this week asked Chief Vanessa Wilson to meet to discuss an exit strategy more than two years after she was selected to lead and reform the city’s embattled police department, the chief’s attorney said Friday.

Monday’s call was unexpected as city staff the previous week had told Wilson that her job was secure, the chief’s attorney Paula Greisen said. Wilson was leaving town to go on vacation when the city manager, Jim Twombly, requested an urgent meeting, Greisen said.

When Twombly said they needed to discuss an exit plan, Wilson told him to talk to her attorney, Greisen said. Nobody from the city has contacted Greisen and there have been no substantive conversations with the city about Wilson’s future, Greisen said.

“This is part of an ongoing smear campaign and effort to get rid of my client,” Greisen said.

The discussions were thrust into the public view Wednesday night when Denver7 reported that Wilson planned to resign from the department, citing three anonymous sources.

Greisen said Wilson had no such plans.

“We were shocked to hear the Channel 7 news story,” she said.

“We are aware of the news coverage regarding Chief Wilson, but it remains wholly improper for us to engage in external, speculative conversations on any personnel matters,” city spokesman Ryan Luby said in a statement. “As we previously stated, we are focused on comprehensive public safety changes that are in the best interests of our community and employees.”

Twombly tapped Wilson to serve as interim chief in January 2020 and then appointed her permanent chief in August 2020 after she beat out three other candidates for the job. She has been with the department since 1996 and is the department’s first female chief.

Wilson took the role as the department careened through a series of high-profile controversies under the previous chief, including an on-duty police officer who passed out drunk while driving his department car and the death of Elijah McClain during a violent arrest by Aurora officers.

When she took the top position, Wilson pledged to improve the department and to restore public trust.

Wilson has fired a number of police officers for wrongdoing, including officers who used excessive force and a union president who sent an email mocking the department’s reform efforts and called the city’s residents crackheads, child molesters and murderers. Unlike previous Aurora police chiefs, Wilson made it a policy to announce the firing of officers for misconduct and publicly discussed the reasons for their dismissal in an effort toward better transparency.

The firings and reform efforts — some mandated by a court-monitored consent decree — have led to discontent within the department. A poll of 458 members of the two unions that represent the rank-and-file found that 442 of those polled had no confidence in Wilson’s leadership. Sixteen said they did. The department is budgeted to employ up to 744 officers.

After the vote in October, city officials said in a news release that the chief had their full support.

“She accepted and embraced her role knowing significant challenges were ahead,” the statement said. “She is responsible for making difficult and, at times, unpopular decisions to meet the needs of both employees and our community.”

Neither of the two unions representing Aurora police officers responded to interview requests about Wilson’s future when contacted Thursday.

The no-confidence vote came as Aurora experienced a significant rise in some crime rates and the department continued to shed officers. Several City Council members have voiced disapproval of Wilson’s leadership. One newly-elected councilwoman, Danielle Jurisnky, on a talk radio show called for the removal of Wilson and the deputy chief, Darin Parker, and called them “trash.”

Jurinsky declined to comment Thursday when asked for an interview on her views of Wilson and the chief’s future with the department.