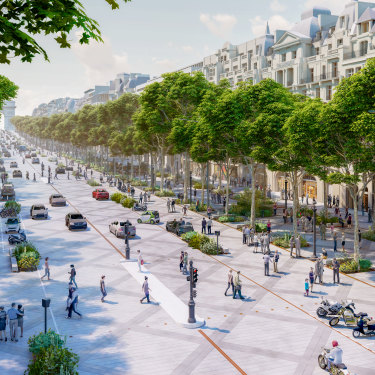 An architectural impression of the soon-to-be revamped Champs-Élysées in central Paris. Credit:PCA-STREAM

The Champs-Élysées – one of the world's truly great streets – was once the beating heart of Paris; a statement of French power achieved through symmetry, symbols and architectural beauty.

But Parisians have fallen out of love with the two-kilometre-long promenade and a rescue mission is underway to save it from the ravages of tourists, traffic and tacky commercialisation. If the full plan comes to fruition, an "extraordinary garden" could emerge about twice the size of Melbourne's Royal Botanic Gardens or a dozen times larger than Sydney's new Barangaroo Reserve.

"It is one of the most famous places in the world. As a proud French citizen I would always say it is of course the most beautiful avenue in the world," says Jean-Noël Reinhardt, the president of a committee which has been pushing for a major rethink of the area.

The reality though, Reinhardt says, is that the Champs-Élysées is starting to look less than its best. Its eight lanes are choked with 3000 cars per hour, the footpaths and street furniture are rundown and hundreds of trees are struggling to stay alive. Its retailers can be charged eye-watering annual rents of about $18,000 per square metre, which critics argue has led to a proliferation of chain stores and other venues targeting cashed-up tourists. 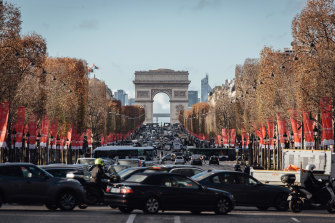 The eight lanes of the Champs-Élysées are often choked with traffic and pollution levels exceed World Health Organisation standards. Credit:Bloomberg

Paris residents now make up just nine per cent of the 100,000 pedestrians who visit the avenue on a normal day.

"Parisians are still very proud of the Champs-Élysées because it belongs to our collective memory," Reinhardt explains. "When cars arrived, they were sold and driven there. In the 1920s, hotels appeared as tourism became very big. And then in the 1930s the big screen had arrived from Hollywood and cinemas appeared.

"The Champs-Élysées was the edge of everything but also at the edge of the problems. Suddenly it wasn't a promenade for Parisians – it was a highway.

"And of course tourism is very positive for Paris and for the Champs-Élysées. But when the local inhabitants start feeling that the place they have known all their life is no longer a place for them, then you start having problems. And that's why we believe it is time for a rebalance."

First laid out in the early 18th century, the street is bookmarked by the Arc de Triomphe and the Place de la Concorde, the vast square where King Louis XVI was executed during the French revolution. 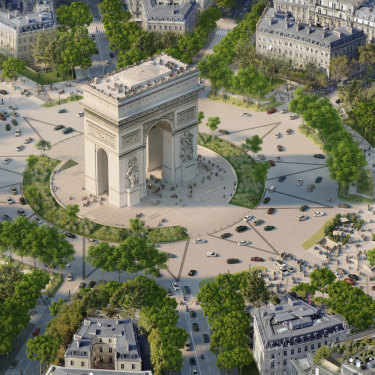 An architectural impression of a revamped Arc de Triomphe in central Paris, which will be redesigned as part of a major overhaul of the famous Champs-Élysées. Credit:PCA-STREAM

Under the €250 million ($395 million) scheme endorsed this week by mayor Anne Hidalgo, the number of lanes will be cut in half to four, the road repaved with a quieter surface material, the footpaths expanded and thousands of new trees planted. 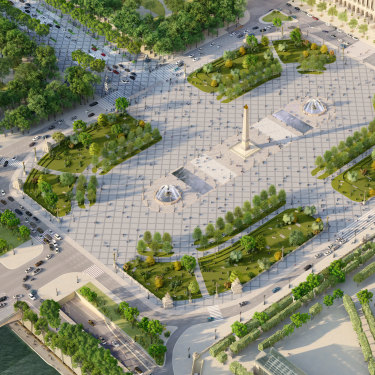 Place de la Concorde will be pedestrianised before the 2024 Olympics as part of the scheme. Credit:PCA-STREAM

In a major change, the chaotic Place de la Concorde will be pedestrianised and cars banished to its outer rim. The nearby Champs-Élysées Gardens – which are barely used – will be revamped and the roads cutting them off from other public spaces will be closed or put into tunnels. And the number of lanes around the Arc de Triomphe will be cut from 11 to seven to make way for bike lanes, a ring of trees and even a "selfie platform".

Together, the changes to the area are probably the biggest since Napoleon III commissioned civic planner Georges-Eugène Haussmann to lay out a new street grid for central Paris in 1852. 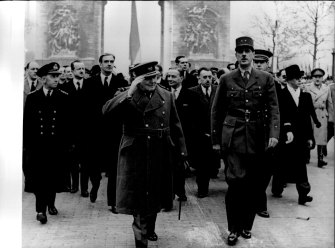 Winston Churchill and Charles De Gaulle walk down the Champs-Élysées after the liberation of Paris in 1944.Credit:United Press International

They will effectively create a green belt stretching nearly four kilometres from The Louvre to the Arc de Triomphe, and snaking south of the Seine over a pedestrianised Pont Alexandre III bridge to the 17th century Les Invalides complex. The interconnected parklands could eventually span 78 hectares – about half the size of London's massive Hyde Park.

New trees along the Champs-Élysées will add 140 per cent more shade, while banning cars from the middle of Place de la Concorde means the percentage of surface dedicated to cars will fall from 74 per cent to just 18 per cent.

A separate plan to redesign the 54 hectares underneath and surrounding the Eiffel Tower will also see the Pont d’Iéna road bridge nearest to the tower covered in grass and plants in time for the 2024 Olympics. 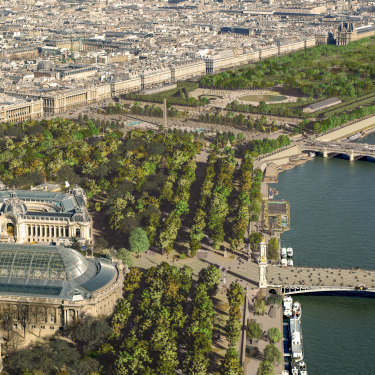 An architectural impression of the sprawling interconnected parkland created by the impending redevelopment of the Champs-Élysées and Place de la Concorde.Credit:PCA-STREAM

Authorities in London have just finished a redesign of the famous Regent Street shopping strip which has cut the number of traffic lanes in half, while Barcelona is rapidly expanding its so-called car-free superblocks.

"We all have a lot of questions about whether tourism will recover or not," Chiambaretta says.

"It will be a bad time for some industries but it might not be so bad if there is less crazy traffic and pollution. That will lead to redefining a new economic model that is more attached to local activity – Parisians – and a bit less depending on the global market. That will help urge investors and governments to invest in these public spaces."

The redevelopment of the south-eastern end of the Champs-Élysées will be completed ahead of the Olympics and the rest by 2030.

12/01/2021 World News Comments Off on ‘An extraordinary garden’: The beautiful but flawed Champs-Élysées is going green
World News