Washington: President Joe Biden has declared the United States is “rising anew” and ready to lead the world again in his first State of the Union-style address to Congress.

Speaking on the eve of his 100th day in office, Biden declared that America and its democratic allies will win the battle for the 21st century rather than autocratic rivals such as China. 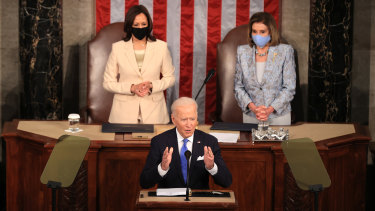 “After 100 Days of rescue and renewal, America is ready for takeoff,” Biden said in an upbeat speech in the House of Representatives.

Noting that over 200 million COVID-19 vaccine doses have been administered and economists are forecasting a post-pandemic boom, Biden said: “In our first 100 Days together, we have acted to restore the people’s faith in our democracy to deliver.

“We’re vaccinating the nation, we’re creating hundreds of thousands of jobs. We’re delivering real results people can see and feel in their own lives.”

Declaring that the US is in a competition with China to win the 21st Century, Biden said: “The autocrats will not win the future, America will. The future will belong to America.”

Seated behind Biden were Vice-President Kamala Harris and House Speaker Nancy Pelosi, the first women in US history to fill their positions.

In his speech Biden mentioned “jobs” over 40 times as he attempted to sell Congress on his plans for a massive investment in infrastructure.