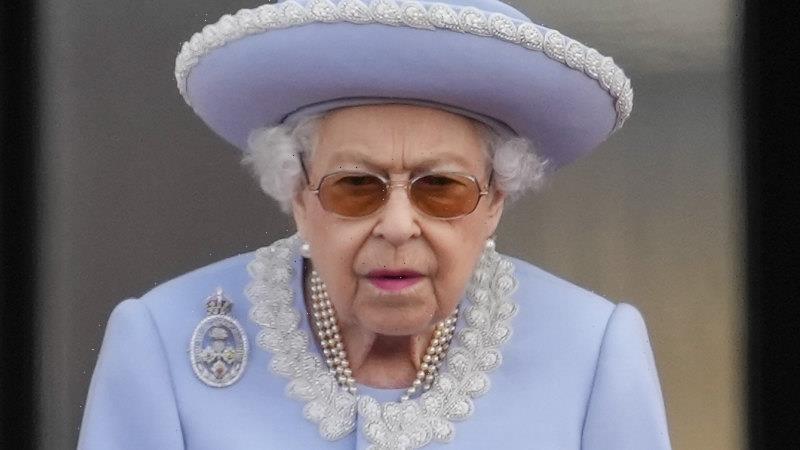 London: The Queen beamed in light blue. A grin of delight painted on her face as she stared down the Mall at the hundreds of thousands of loyal subjects who had come just to see her, on this most unprecedented of royal anniversaries.

As the first British monarch to mark 70 years on the throne, she let the younger generation take the spotlight for the ceremony. 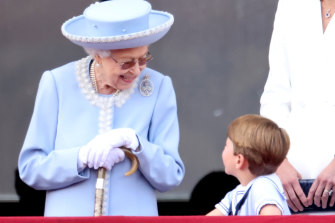 Queen Elizabeth II and Prince Louis of Cambridge on the balcony of Buckingham Palace during Trooping The Colour in London, England. Credit:Getty

Her grandchildren grimaced and plugged their ears as the might of the British air force roared overhead through London’s clear blue June skies.

For a moment, it was easy to forget that this 96-year-old was anything but as sprightly as she’s ever been.

Then you noticed the walking stick, which she leaned heavily on for the entire 15 or so minutes she was in full view of the public.

And, a few hours later, we learned it had taken much more of a toll than it had appeared. The Queen, the palace said, had greatly enjoyed today’s birthday parade, but did experience some discomfort. 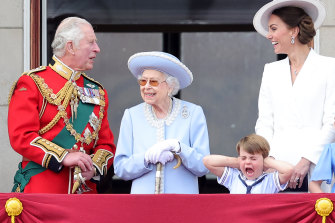 Centre of constancy even as she grows tired: Queen Elizabeth.Credit:Getty

Considering the journey and activity required to participate in Friday’s National Service of Thanksgiving at St Paul’s Cathedral, with “great reluctance” had concluded that she will not attend.

A critical reminder that what had been on display earlier that day can no longer be taken for granted.

It is at events, such as royal jubilees, weddings, coronations, and the sovereign’s birthday, which they acknowledge the fundamental rule underpinning the royal family’s relationship with the people: that they have to be seen to be believed.

While four-year-old Prince Louis, sporting the same light blue and white sailor-style outfit which his father William wore during the 1985 Trooping the Colour, stole the show with a variety of funny faces, it will be the images of the Queen engaging him which may well close the chapter on her life in pictures on that famous balcony.

The Queen, like her grandchildren will now do, has grown up on that balcony.

She first turned out there as a baby, and since then, has appeared as a teenager, a young bride, a new Queen, a mother, grandmother and now great-grandmother.

She was just 14 months when she was held up for the crowds to see when her parents, then the Duke and Duchess of York, returned from a six-month tour of Australia and New Zealand.

The new generations have grown up around her as the royal family has changed. The balcony is in its own way a snapshot of history.

The Duke of Edinburgh was sadly no longer by her side. Neither Prince Harry and wife Meghan, who were spotted playfully engaging in a family reunion by an eagle-eyed press earlier.

Neither was her “favourite”, Prince Andrew, who will also miss Friday’s service following a coronavirus test. That would have come as a relief to the royal PR advisers before the Queen herself announced she would not attend.

The young Cambridges entertained like their father, uncle and cousins had done over the decades, and future King George, in a dark blue suit, appeared to now be more understanding of his place in the world despite being only eight. Princess Charlotte, seven, however, smiled and wound up her younger brother before their mother intervened.

Charles, the Prince of Wales, stood on the Queen’s right-hand side and the pair could be seen chatting and smiling ahead of the flypast. The longest-ever heir in waiting has stepped up during the past 12 months to the point where the inevitable transition will appear to have been very smooth.

By midday the crowds unable to get into The Mall or St James’s and Green Park had filled the green around Wellington Arch, with thousands more crowded into Hyde Park. Huge cheers of “hooray” erupted around the city from the thousands of royal fans on The Mall in front of the palace and those who could only see the sovereign on big screens scattered throughout the surrounding parks.

They sang and waved flags and honoured their Queen. The event was only interrupted by some animal rights protesters who failed to overshadow the occasion in their attempts to stop the carriage procession.

A number of arrests were made, the Metropolitan Police have said.

Tributes came from prime ministers and presidents, film stars and athletes and the average man on the street.

Barack Obama likened her to his own grandmother, Emmanuel Macron sent a thoroughbred as a gift.

But despite the challenging times, it remained the Queen, a beacon of constancy in an ever-changing world, who remained at the centre.

02/06/2022 World News Comments Off on After balcony appearance, Queen’s withdrawal reminds us of bigger picture
Markets