Such weather conditions are predicted by forecasters for the coming week in the picturesque city of Lagos, in Portugal, and elsewhere in the country. The weather forecast by Netweather shows the mercury hitting 41C tomorrow in Lagos, gradually rising throughout the week until it hits 46C degrees on Wednesday.

Portuguese online newspaper Observador said the peak temperatures are an “anomaly”, as they will be higher than normal for this time of the year – “at least 5C higher than usual”.

The weather forecast from Observador said: “In the next week, or rather the next 15 days, forecasts point to very hot weather. And put ‘very hot’ underlined.

“We are talking about temperatures above 40C in the interior of the country. And abnormal values ​​for the season, at least 5C higher than usual.”
.
The forecast explained the heat will arrive “in two phases”, adding: “This weekend, temperatures will already be higher, due to a mass of hot air coming from North Africa – which can once again bring associated dust from the Sahara. 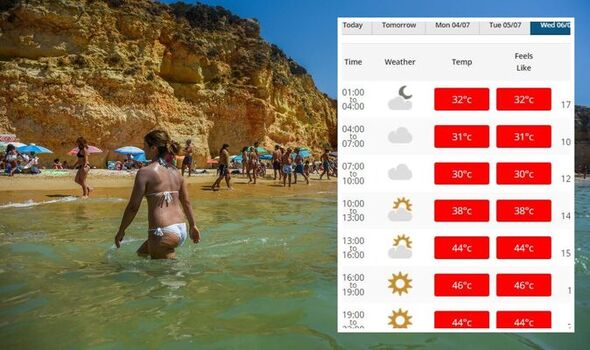 “But even so, some instability will remain until Wednesday, with rain in the north and centre. From there, yes, the thermometers enter the ‘vermilion’ and tropical nights are also expected.”

European countries have been hit by scorching temperatures over the past few weeks as a heatwave rages.

Spanish destination Mallorca will see temperatures of up to 37C degrees while in Corfu, Greece, the thermometers are set to reach 35C.

Meanwhile, temperatures are set to also rise in the UK in the coming week, though the pleasant weather will not quite reach 30C, according to senior meteorologist Jim Dale. 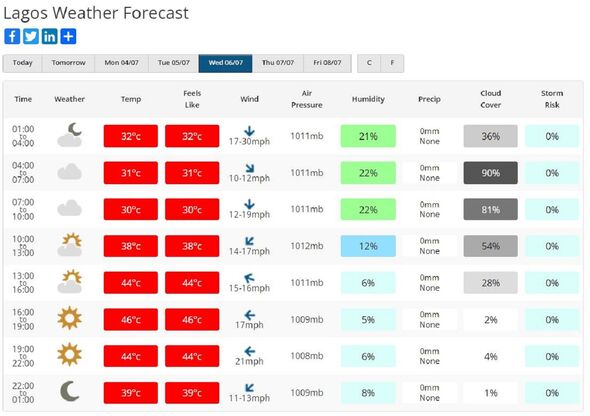 He told Express.co.uk: “Over the next few days, the temperature will start moving up as the week unfolds.

“We will see a gradual increase of temperature in the south and east of England whilst the North West will be much cooler.

“The pleasant conditions come as we lose the low north-western pressure and instead the pressures start to rise and impress upon us.

“Peaks of temperature will be seen from Thursday through Saturday this coming week, but always in the South East of England and they are to reach up to around 28C degrees.”

Pleasant temperatures in the UK are often a result of high pressures coming from Southern Europe, but that is not the case this time, according to the meteorologist.

Mr Dale explained: “This warmth is not related to the heatwave seen in the rest of Europe southern from us.

“It is because of our own high pressure, which is why it won’t go higher than 35C degrees. It is more homegrown rather than imported.”