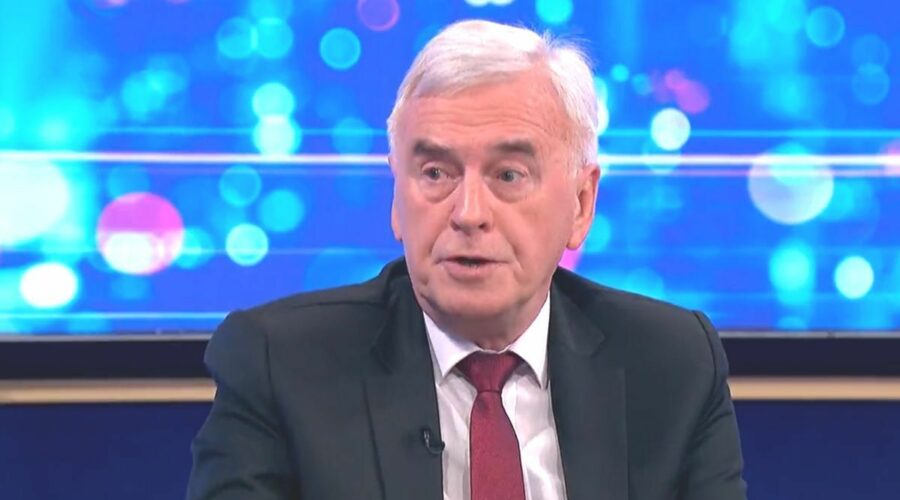 John McDonnell on Labour's policy making ahead of election

The Labour MP claimed his party colleagues should “learn the lessons” from former leader Jeremy Corbyn’s failed general election campaign. Mr McDonnell explained Sir Keir Starmer was “running out of time” to convince the electorate he would be a more capable Prime Minister than current leader Boris Johnson. He urged the Labour party to hastily announce and explain policy plans if the opposition hopes to build enough support to defeat the rival Conservative party in a future election.

Speaking on Robert Peston’s ITV show, Mr McDonnell said: “My advice to Keir Starmer and the Labour frontbench is to learn the lessons from 2019 with us where we were throwing out policy after policy.”

He continued: “You need time to announce the policy, explain it, rebut the criticisms and then explain to people what it means to them and their communities.

“We desperately need, now, the development of that programme which will tackle the real issues people are facing and, I think, expose the Tories for the failure that they are.”

Mr McDonnell suggested the Labour party had not yet outlined a clear policy plan for if Sir Keir were to succeed Mr Johnson as the next UK Prime Minister.

The Labour MP suggested his party had focused on opposing the Prime Minister in recent months, but had failed to clearly outline the alternative approach they would take in leadership.

Mr McDonnell described Mr Johnson as “a gift to the Labour party,” but warned this would not be enough for Sir Keir to prevail in the next vote.

The next general election for the UK is anticipated to take place in 2025, providing the current Prime Minister serves his full term in office.

Mr Johnson was recently able to hold his leadership position as he survived a vote of confidence triggered by critical Tory MPs.

In the 2019 general election, Mr Johnson won a landslide majority as the Labour party lost a considerable 7.8 percentage share of the vote.

Following his campaign disaster, Mr Corbyn stepped down from his leadership position and was replaced with the current Labour Leader, Sir Keir.

Despite polling indications, Mr McDonnell asserted that a Labour victory was not on the horizon unless Sir Keir began to rapidly outline, explain and defend new policy measures that would encourage electorate support.

Wes Streeting, Labour MP and Shadow Health Secretary echoed the claims of Mr McDonnell as he said: “We can’t just rely on the Conservatives failing.”

Despite the concerns of Labour party members, Sir Keir has failed to outline a clear policy to address grave economic concerns in the UK, aside from asserting his measures would trump Conservative fiscal plans.

Mr Streeting rushed to the defence of the Labour Leader as, when questioned on the party’s economic plans, he said: “You shouldn’t expect us to set out the fine details of tax policies this far out of a general election.”