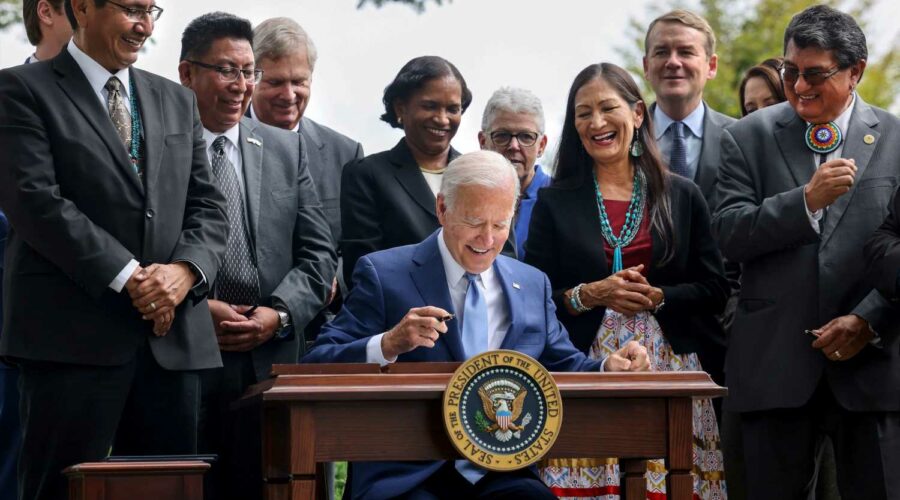 [The stream is slated to start at 3:00 p.m. ET. Please refresh the page if you do not see a player above at that time.]

After nearly a year of planning and months of negotiations with Congress, President Joe Biden is signing his landmark $1 trillion infrastructure bill into law Monday.

He will be joined by several Republican lawmakers, as well, in a rare showing of bipartisanship at a signing ceremony. GOP Sens. Mitt Romney of Utah, Rob Portman of Ohio and Shelley Moore Capito of West Virginia are expected to be in attendance.

The bill will inject $550 billion of new funds into transportation, broadband and utilities over the next five years. It also represents one half of Biden's domestic agenda, and opens the gate to passage of the second half, a $1.75 trillion social spending and climate change bill.

Biden's signature on the bill Monday follows years of failed efforts in Washington to pass legislation to overhaul physical infrastructure, improvements that advocates have said will boost the economy and create jobs.

The legislation will put $110 billion into roads, bridges and other major projects. It will invest $66 billion in freight and passenger rail, including potential upgrades to Amtrak. It will direct $39 billion into public transit systems.

The plan will put $65 billion into expanding broadband, a priority after the coronavirus pandemic left millions of Americans at home without effective internet access. It will also put $55 billion into improving water systems and replacing lead pipes.

Funding will go out over a five-year period, but it could take months or years for many major projects to start.

The bill passed the House shortly after 11:00 p.m. on Nov. 5, following weeks of wrangling between the progressive and centrist planks of the Democratic party.

Here is the list of speakers, according to the White House: