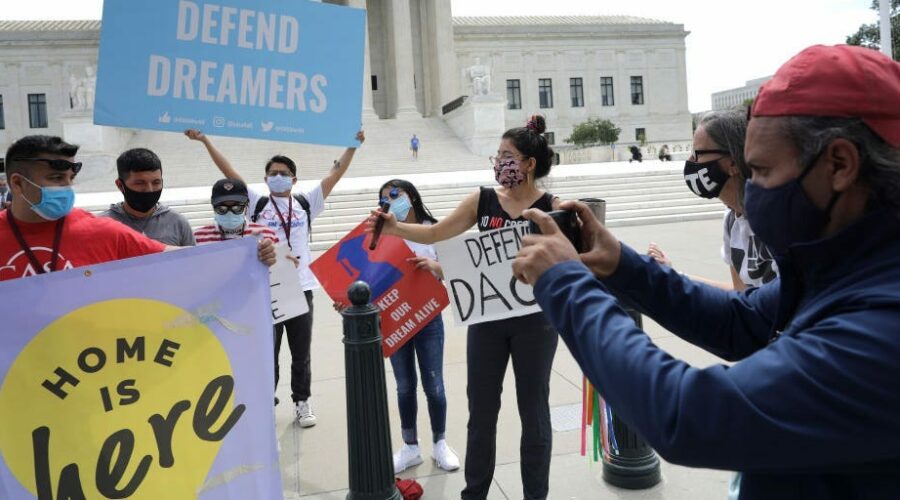 On Thursday, the House of Representatives passed the American Dream and Promise Act, one of two major immigration proposals advanced this week under the Biden Administration.

If signed into law, the bill will place 2.3 million “Dreamers,” undocumented immigrants who arrived in the US as minors, on a path to citizenship.

At least 300,000 immigrants who have Temporary Protected Status or Deferred Enforced Departure, forms of humanitarian relief, will also be put on a track to permanent residency if they meet eligibility requirements if the bill becomes law.

All House Democrats voted to approve the legislation, and nine Republicans voted alongside them, in a 228-197 vote.

The American Dream and Promise Act would allow Deferred Action for Childhood Arrivals (DACA) recipients and undocumented immigrants who arrived in the US before the age of 18 to apply, if they meet the requirements, for a 10-year conditional permanent residency.

If applicants earned a college degree or attended a bachelor’s program for two years, served in the military for two years, or worked in the US for three years, they qualify to apply.

The new bill is headed to the Senate and, if signed, would mean that the children of immigrants who hold temporary work visas would be eligible to apply for status outside of employment-based processes.

The House is also expected to pass a second bill Thursday which offers a temporary legal status to hundreds of thousands of undocumented farmworkers.

19/03/2021 Politics Comments Off on US House passes the American Dream and Promise Act, which could put more than 2 million 'dreamers' on path to citizenship
Markets