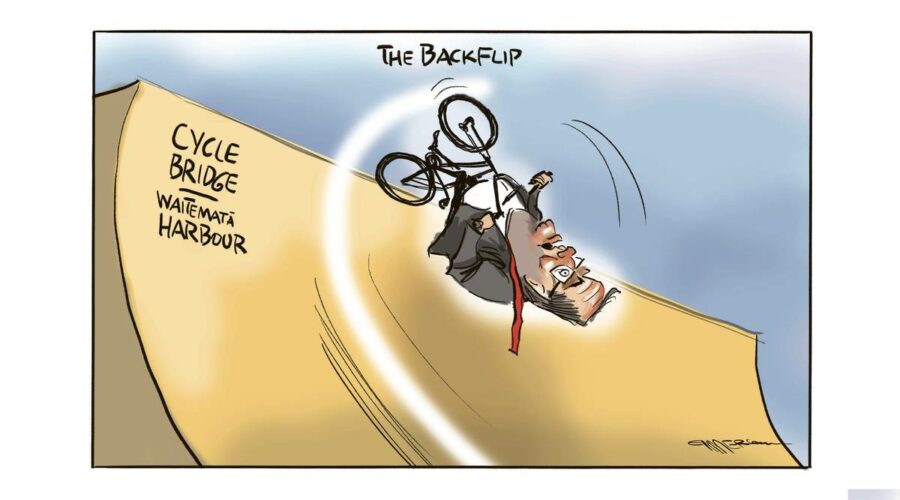 News this week that the Government could dump a proposal for a $685 million walking and cycling bridge in Auckland was only a surprise because it came so soon after the project was announced.

Usually projects like this have a bit of life before they’re quietly killed – but the bridgewas announced barely two months before reports emerged of its imminent demise.

On Tuesday, Deputy Prime Minister Grant Robertson suggested there’d been a messaging failure. The Government focused its attention on the bridge, but didn’t talk about the work it was doing on a more popular tunnel, likely for road and rail, under the Waitemata Harbour (this work is fairly bipartisan and has been going on in some form at Waka Kotahi for years).

Messaging failure is an understatement.

Contempt for the bridge is one of the most unifying issues in recent New Zealand politics. A Newshub-Reid Research Poll found that 81.7 per cent of voters thought the Government shouldn’t spend $685m on the bridge, while just 11.9 per cent said they wanted it.

Not even the post-March 15 ban on some firearms united voters like this. Back then a 1 News-Colmar Brunton Poll had 61 per cent of voters behind the ban.

If the Government ultimately decides to give the bridge the boot, it’ll want to conduct a thorough post-mortem into how it misread the mood of the country quite so poorly.

The bridge never had a champion beyond Transport Minister Michael Wood and Robertson himself.

This is becoming something of a problem for the Government, which had to reset its light rail plan after it proved so unpopular, it united a disparate right and left wing alliance comprising everyone from the EMA to Generation Zero against the way they’d been left out of the original plan.

The controversy over the walking and cycling bridge was similar. It managed to somehow unite the political left against one of its most expensive infrastructure wins.

There are two other preferred options.

One, would be a more expensive bridge which includes walking, cycling and public transport – potentially costing $1.9 billion. This option neuters concerns that the walking and cycling bridge on its own caters to wealthy inner city dwellers at the expense of improving the transport network for everyone. It would also represent far better value-for-money, moving far more people than a simple walking and cycling connection.

The other option would be to take a lane or two from the existing bridge for walking and cycling. This option still appears popular, and might be what the Government eventually opts for – taking its $750m and putting it towards a new tunnel, likely for road and rail, under the harbour.

Infrastructure in the age of climate change is difficult for the left. Traditionalists think that for every problem there’s an infrastructure solution; but the vanguard of the progressive movement believes infrastructure is as much about what you build as what you don’t.

The idea behind this is called “induced demand”, and it essentially means that building more roads doesn’t ease congestion – it encourages more people into cars, which only makes congestion worse. The ideal is building cycling and public transport infrastructure, getting people around efficiently, while freeing up roads for more essential uses.

The problem for Labour is that repurposing the existing network isn’t half as attractive as lavishing billions on new roads and bridges. The whole way politics thinks about infrastructure is as a series of fluorescent hi-vis photo-ops capped off with a glorious ribbon cutting.

Robertson won’t resolve the left’s internecine struggle by axing the bridge in favour of the tunnel. Yes, he won’t get a white elephant bridge, but the tunnel, pegged at a cost of more than $10 billion has a benefit-cost-ratio of 0.2 – even lower than the bridge, which had a BCR of 0.4 to 0.6.

Arguments over induced demand will resurface, and it’s not clear what Auckland’s cyclists are meant to do while the tunnel is being built. Even if it were accelerated, it’s unlikely to be built before the 2030s. Cyclists – a well-organised lobby – will hardly wait patiently until then.

The progressive left should be worried too. Light rail and the cycle bridge represent two examples of causes that were brought to the brink of failure after dissenting leftist found themselves on the same side as the right.

As both projects near crucial decision stages, the left might want to ponder whether the perfect is the enemy of the good and whether continued intransigence risks being left with nothing.