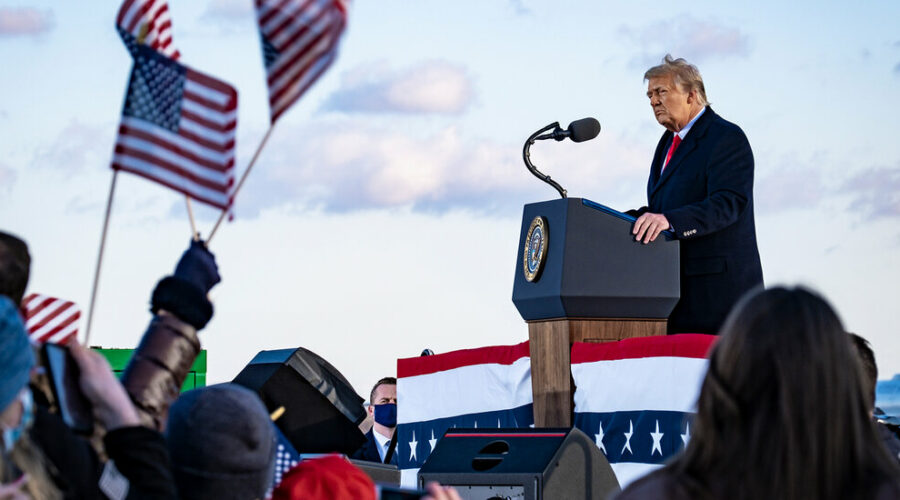 WASHINGTON — The Supreme Court on Monday rejected a last-ditch attempt by former President Donald J. Trump to shield his financial records, issuing a brief, unsigned order that ended Mr. Trump’s bitter 18-month battle to stop prosecutors in Manhattan from poring over his tax returns as they investigate possible financial crimes.

The court’s order was a decisive defeat for Mr. Trump, who had gone to extraordinary lengths to keep his tax returns and related documents secret, taking his case to the Supreme Court twice. There were no dissents noted.

From the start, Mr. Trump’s battle to keep his returns under wraps had tested the scope and limits of presidential power. Last summer, the justices rejected Mr. Trump’s argument that state prosecutors cannot investigate a sitting president, ruling that no citizen was above “the common duty to produce evidence.” This time, the court denied Mr. Trump’s emergency request to block a subpoena for his records, effectively ending the case.

The ruling is also a big victory for the Manhattan district attorney, Cyrus R. Vance Jr., a Democrat. He will now have access to eight years’ worth of Mr. Trump’s personal and corporate tax returns, as well as other financial records that Mr. Vance’s investigators view as vital to their inquiry into whether the former president and his company manipulated property values to obtain bank loans and tax benefits.

“The work continues,” Mr. Vance said in a statement.

In his own lengthy statement, Mr. Trump lashed out at the Supreme Court’s decision and the investigation. He characterized the inquiry as a politically motivated attack by New York Democrats, calling it “a continuation of the greatest political Witch Hunt in the history of our Country.” He also falsely asserted, again, that he had won the 2020 election.

“The Supreme Court never should have let this ‘fishing expedition’ happen, but they did,” Mr. Trump said. He added, “For more than two years, New York City has been looking at almost every transaction I’ve ever done, including seeking tax returns which were done by among the biggest and most prestigious law and accounting firms in the U.S.”

Prosecutors in Manhattan now face a monumental task. Dozens of investigators and forensic accountants will have to sift through millions of pages of financial documents. Mr. Vance has brought in an outside consulting firm and a former federal prosecutor with significant experience in white-collar and organized crime cases to drill down into the arcana of commercial real estate and tax strategies.

The Supreme Court’s order set in motion a series of events that could lead to the startling possibility of a criminal trial of a former U.S. president. At a minimum, the ruling wrests from Mr. Trump control of his most closely held financial records and the power to decide when, if ever, they would be made available for public inspection.

The court’s ruling concerned a grand jury subpoena issued by Mr. Vance’s office in August 2019 and sent to Mr. Trump’s accountants, Mazars USA. The firm has said it will comply with the final ruling of the courts, meaning that the grand jury should receive the documents in short order. On Monday, Mazars issued a statement saying it “remains committed to fulfilling all of our professional and legal obligations.”

The crucial next phase in the Manhattan inquiry will begin this week when investigators collect a vast trove of digital records from a law firm that represents Mazars, according to people with knowledge of the matter, who spoke on the condition of anonymity because of the sensitive nature of the investigation, as well as former prosecutors and others who described the next steps.

Armed with the subpoena, the investigators will go to the law firm’s Westchester County office outside New York City and take away copies of tax returns, financial statements and other records and communications relating to Mr. Trump’s taxes and those of his businesses.

The inquiry, which began in 2018, initially examined hush-money payments to two women who had said they had affairs with Mr. Trump, relationships the former president has denied. But it has since grown to include potential crimes like insurance, tax and banking fraud.

Even before the Supreme Court ruling, Mr. Vance’s investigation had heated up, with his office issuing more than a dozen subpoenas in recent months and interviewing witnesses, including employees of Deutsche Bank, one of Mr. Trump’s top lenders.

One focus of Mr. Vance’s inquiry is whether Mr. Trump’s company, the Trump Organization, inflated the value of some of his signature properties to obtain the best possible loans, while lowballing the values to reduce property taxes, people with knowledge of the matter have said. The prosecutors are also examining the Trump Organization’s statements to insurance companies about the value of various assets.

The records from Mazars — including the tax returns, the business records on which they are based and communications between the Trump Organization and its accountants — may allow investigators to see a fuller picture of potential discrepancies between what the company told its lenders and told tax authorities, the people said.

It remains unclear whether the prosecutors will ultimately file charges against Mr. Trump, the company, or any of its executives, including Mr. Trump’s two adult sons, Donald Trump Jr. and Eric Trump.

The court’s order will not put Mr. Trump’s tax returns in the hands of Congress or make them automatically public. Grand jury secrecy laws will keep the records private unless Mr. Vance’s office files charges and enters the documents into evidence at a trial.

The New York Times obtained tax return data extending over more than two decades for Mr. Trump and the hundreds of companies that make up his business organization, including detailed information from his first two years in office.

Last year, The Times published a series of investigative articles based on an analysis of the data, which showed that Mr. Trump had paid virtually no income tax for many years and that he is under an audit in which an adverse ruling could cost him more than $100 million. He and his companies file separate tax returns and employ complicated and sometimes aggressive tax strategies, the investigation found.

As a candidate in 2016, Mr. Trump promised to disclose his tax returns, but he never did, breaking with White House tradition. Instead, he fought hard to shield the returns from scrutiny, for reasons that have been the subject of much speculation.

In 2019, Mr. Trump went to court to fight the subpoena, arguing that as a sitting president, he was immune from criminal investigation. The United States Court of Appeals for the Second Circuit, in New York, ruled against that argument and said state prosecutors may require third parties to turn over a sitting president’s financial records for use in a grand jury investigation.

Mr. Trump appealed to the Supreme Court. In July 2020, the justices soundly rejected Mr. Trump’s central constitutional argument against the subpoena in a landmark ruling.

“No citizen, not even the president, is categorically above the common duty to produce evidence when called upon in a criminal proceeding,” Chief Justice John G. Roberts Jr. wrote for the majority in that decision.

Although Justices Clarence Thomas and Samuel A. Alito Jr. dissented from other aspects of the decision, all nine justices agreed with that proposition. But the court gave Mr. Trump another opportunity to challenge the subpoena, on narrower grounds.

Mr. Trump did just that, arguing that the subpoena was overly broad and amounted to political harassment. Those arguments were rejected by a trial judge and the federal appeals court in New York. The appeals court noted the documents turned over to the grand jury would not be made public, undermining the argument that Mr. Vance was seeking to embarrass Mr. Trump.

“There is nothing to suggest that these are anything but run-of-the-mill documents typically relevant to a grand jury investigation into possible financial or corporate misconduct,” the court said in an unsigned opinion.

Mr. Trump’s lawyers then filed an “emergency application,” asking the Supreme Court to intercede. They urged the court to block the appeals court’s ruling while it decided whether to hear another appeal from Mr. Trump, arguing the president would suffer an irreparable harm if the grand jurors saw his financial records.

In response, Mr. Vance’s lawyers pointed to the Times articles. The cat, they said, was out of the bag. “With the details of his tax returns now public, applicant’s asserted confidentiality interests have become highly attenuated if they survive at all,” Mr. Vance’s brief said.

In addition to fighting the subpoena from Mr. Vance’s office in court, Mr. Trump sued to block a congressional subpoena for his returns and successfully challenged a California law requiring presidential primary candidates to release their returns.

“Trump will not be given deference as a former president,” said Anne Milgram, a former assistant district attorney in Manhattan who later served as New Jersey’s attorney general and has been critical of Mr. Trump. “Under the eyes of the laws of the state of New York, he has the same rights as others in the state. Neither more nor less.”