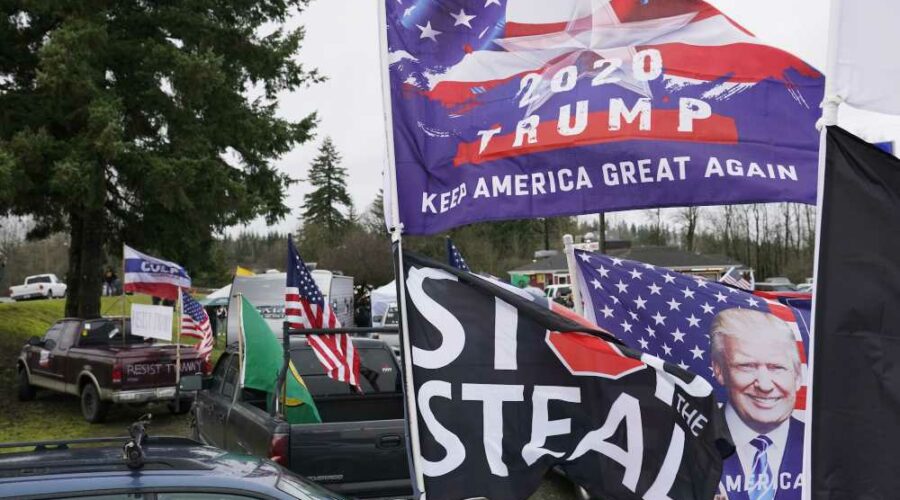 Reps. Mo Brooks (R-Ala.), Paul Gosar (R-Ariz.), and Andy Biggs (R-Ariz.) all interacted with Ali Alexander, the founder of the pro-Trump “Stop the Steal” movement, in the lead up to Jan. 6, Alexander’s attorney said in a suit filed late Friday.

Alexander shared this information with the House select committee investigating Jan. 6, his attorney wrote in the filing, which was reported by Politico. According to the suit, Alexander told the committee he participated in “a few phone conversations” with Gosar and spoke with Biggs in person “and never by phone, to the best of his recollection.” Alexander additionally said he texted with Brooks. Alexander’s attorney said in the filing that the text has been turned over to the committee. Alexander also spoke on the phone to Brooks’ staff “about a ‘Dear Colleague’ letter and how his activists could be helpful” in objecting to the election certification.

Rioter Who Attacked Cops With a Fire Extinguisher Slapped With Longest Jan. 6 Prison Sentence Yet

Alexander has previously bragged about his interactions with Brooks, Gosar, and Biggs. “I was the person who came up with the Jan. 6 idea with Congressman Gosar, Congressman Mo Brooks, and Congressman Andy Biggs,” Alexander said in a since-deleted video. “We four schemed up putting maximum pressure on Congress while they were voting, so that [representatives] who we couldn’t lobby, we could change the hearts and minds of Republicans who were in that body hearing our loud war from outside.”

On Jan. 6, the suit says, Alexander spoke with Kimberly Guilfoyle, a former Fox News anchor and current girlfriend of Donald Trump Jr. who has bragged about raising money for the Stop the Steal rally that morphed into the Capitol attack. The suit described the exchange as a “short and pleasant call” during which Guilfoyle “thanked Alexander for being a leader on voting rights and creating the ‘Stop the Steal’ movement.” They additionally discussed “the ongoing Georgia election and the GOP primaries that would take place in 2022,” per the suit. Alexander has shared details from the call with the committee, according to the suit.

Alexander filed the suit in order to stop the House Jan. 6 committee from obtaining his phone records from Verizon. Contained in those records, the suit contended, are Alexander’s interactions with people who would be protected by privilege.

“The Select Committee’s Subpoena will yield data that will be used to populate a massive database of the personal friends and political associates of not just Plaintiffs, but everyone who has had any connection with the belief in election integrity, government skepticism, other political associations or vendors who worked with Plaintiff,” the suit alleges. “By analyzing data patterns in phone numbers, call session times, text messages, and geolocation data, investigators can build a permanent nationwide model of intimate political associations and networks within the conservative movement.”

None of the lawmakers named by Alexander have been called to testify before the committee. Responding to a Rolling Stone report that protest organizers said Republican lawmakers and White House staff participated in “dozens” of planning meetings for the event, Brooks denied his involvement but said that he’d be “proud” if he staff had helped. Brooks also spoke at the “Stop the Steal” rally. Clad in body armor, he encouraged the crowd to “start taking down names and kicking ass.” Gosar’s chief of staff told The New York Times earlier this month that Alexander was “a solid organizer” but denied helping plan the rally, telling the paper Gosar’s office only promoted the Jan. 6 rally but did not help plan it. Biggs has also denied that he helped organize the rally.

18/12/2021 Politics Comments Off on 'Stop the Steal' Founder Spilled to Jan. 6 Committee About Contact With Republican Lawmakers
Markets