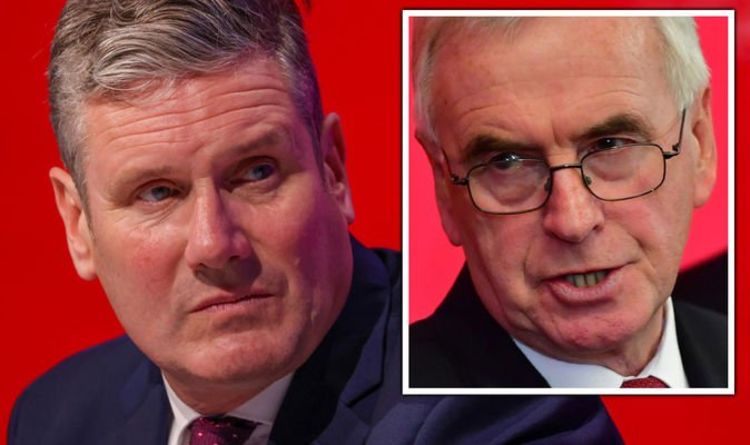 “After 18 months of your leadership, our movement is more divided than ever and the pledges that you made to the membership are not being honoured,” he said.

The Middlesbrough MP accused the Sir Keir of refusing to let him campaign for a £15 minimum wage.

He was the last remaining ally of former leader Jeremy Corbyn in the shadow cabinet.

Addressing Labour members at a rally in Brighton last night, Mr McDonnell said it was “inconceivable that Mr McDonald has to resign”.

He said: “I saw someone as I was coming up, I said what do you think of conference and they said what a sh*tshow it’s been, it’s falling apart, absolutely.”

Further heaping praise on his colleague on social media, he said: “Andy McDonald has been a terrific Shadow Secretary of State for Employment Rights.

“He’s just delivered the most comprehensive and detailed policy programme for securing employment rights in our history.

“He has resigned on a point of principle that workers should have decent pay.”

The resignation announcement last night was timed to cause maximum embarrassment for Sir Keir.

The party conference has so far been plagued by bitter infighting among the party.

Rows have broken out about planned changes to the party’s internal rules and over comments made by Angela Rayner referring to “Tory scum”.

After Labour delegates backed Sir Keir’s plans to change the rules used to elect the party’s leader, the Holborn and St Pancras MP has been hoping to move on from internal division.

He had been hoping the final days of the party conference would be remembered for bold policy announcements.

However, any planned announcements have now been overshadowed by the dramatic resignation.

Furious, he told BBC’s Good Morning Scotland: “We’re not quite sure why he resigned yesterday, he seems to have said one thing and written another.

“That looks as if it might be a planned sabotage of conference, rather than it being about any principle.”

He added: “We’re all very angry and frustrated that the headlines are being dominated by one person when we should be talking about the big issues of the future.”

Accepting the resignation, Sir Keir said he was focused on “winning the next general election”.

He said: “I want to thank Andy for his service in the shadow cabinet.

“Labour’s comprehensive new deal for working people shows the scale of our ambition and where our priorities lie.

“My focus and that of the whole party is on winning the next general election so we can deliver for working people who need a Labour government.”