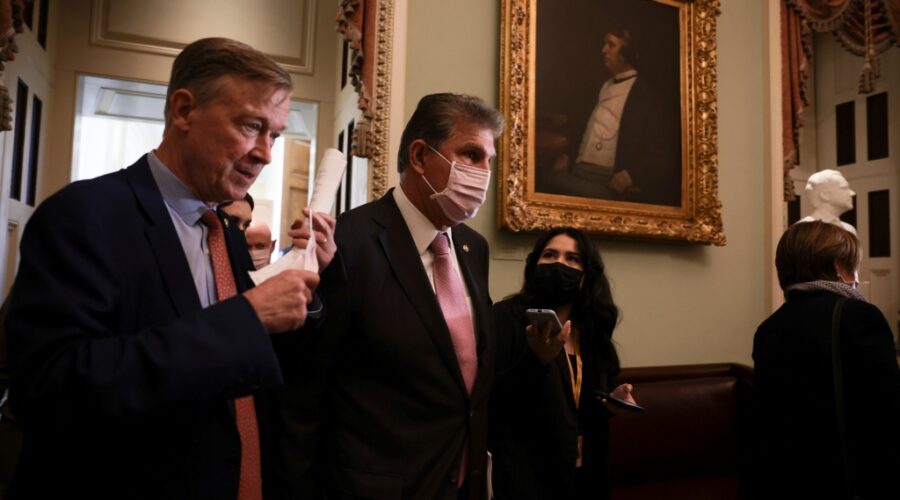 While much national attention on a path forward on a federal climate and tax bill focuses on U.S. Sen. Joe Manchin’s OK, one of Colorado’s U.S. senators is likewise being heralded as “essential” to its breakthrough.

Sen. John Hickenlooper was credited in Politico, the New York Times and Axios for keeping negotiations going with Manchin, even after much speculation that the deal was dead. The League of Conservation Voters called Hickenlooper “invaluable,” a position echoed by the Environmental Defense Action Fund, in keeping hopes alive on fighting climate change.

On Wednesday evening, Manchin, of West Virginia, and Senate Majority Leader Chuck Schumer announced agreement on a budget reconciliation bill after months of seesawing negotiations. While almost all of the Democratic majority had signed on to the previous effort, known as Build Back Better, the party’s razor-thin majority meant it needed unanimous support from the caucus.

Manchin had been one of the holdouts, with inflation being a key cited concern. Two weeks ago, surrounded by reporters trying to learn what proposals he would support, Manchin declared, “I’m done,” according to the Washington Post.

But Hickenlooper, along with a handful of other Democratic senators, weren’t, according to media reports and the senator.

“A lot of people gave up a couple of weeks ago, when Joe Manchin said he had enough and he wasn’t going to keep working on it,” Hickenlooper said in an interview with the Denver Post Thursday. “And yet every time I talked to him, he said he was committed to still trying to find a solution.”

He said their offices communicated daily. Hickenlooper enlisted economists from the Wharton School of the University of Pennsylvania to model how the bill would have nil effect on current inflation, and even a slight deflationary effect over 10 years as families paid less for energy costs and knocked off $300 billion from the national deficit.

Manchin’s office did not return a request for comment about working with Hickenlooper on the bill.

In the end, the bill is poised to deliver “the largest climate rescue investment in the history of the planet,” Hickenlooper said. He added that it’s smaller than what many experts say is needed, but hoped it would establish the United States as a climate leader and spur rivals like China to invest in their own climate reduction initiatives to keep up.

Some of Hickenlooper’s highlights from the bill include $100 billion in clean energy tax credits to expand wind and solar energy production, carbon capture and more; $150 million for the National Renewable Energy Lab based in Golden; a $4,000 tax credit to help people buy used electric vehicles; and establishing a fee on leaked methane that rises to $1,500-per-ton in 2026.

On the latter, a 2018 Colorado State University study estimated as much as 13 million metric tons of methane gas are leaked by the U.S. oil and gas industry each year.

It also establishes a 15% minimum corporate tax rate, allows Medicare to negotiate prescription drug prices and increases funding for the Internal Revenue Service so it has more resources to “make sure the people cheating on their taxes are held responsible,” Hickenlooper said.

While careful to note that the bill is not yet voted on, a pair of national environmental groups were ecstatic at the progress with the bill and hopeful for its future.

The potential impacts of the bill “are really challenging to understate,” he said, calling Hickenlooper’s efforts “essential” to where it is. Likewise, League of Conservation Voters Senior Vice President of Campaigns Pete Maysmith called Hickenlooper’s work “invaluable” on a bill that, while a compromise, is still “the strongest federal climate legislation that’s ever gotten this far.”

“We believe the bill will lead to meaningful and measurable progress toward a just and equitable clean energy future for everybody, and that’s enormously exciting,” Maysmith said.

However, it doesn’t have universal acclaim. Cynthia Meyer, a spokesperson for the Colorado Chamber of Commerce, said current economic uncertainty has their members asking Congress to give them time to stabilize, without new obstacles to navigate.

“Lawmakers at all levels of government should focus on promoting innovation and investment rather than creating new costs or burdensome regulations on employers,” Meyer said. “While we’re still reviewing the details of the proposal, we’re concerned that federal tax increases in the current economic climate will inhibit growth at a time when Colorado businesses are already struggling.”

While many Democrats and supporters hail the breakthrough, it’s not a done deal. A particular question mark is U.S. Sen. Kyrsten Sinema, an Arizona Democrat who has previously expressed opposition to some tax reform measures. A spokesperson said she is “reviewing the text and will need to review what comes out of the parliamentarian process,” according to Bloomberg.

Hickenlooper acknowledged the bill isn’t through the chamber yet, but said he’s confident in its chances.

“The Senate is 100 different people, and even on this reconciliation, we need 50 of those people to be unanimous,” Hickenlooper said. “I think we’ll get there. I think this is a good, balanced bill.”

His fellow Colorado Sen. Michael Bennet, a Democrat who is up for re-election this November, backed the effort in a statement Thursday. He called it “the largest investment ever to fight climate change” while reducing U.S. dependence on foreign oil. It also makes “the biggest corporations finally pay their fair share.”

“Washington has spent decades cutting taxes for the wealthiest Americans and exploding our deficit instead of making responsible choices for our future,” Bennet said. “The Inflation Reduction Act represents a historic break from those failed policies. … We have to get this done for Colorado and the country.”