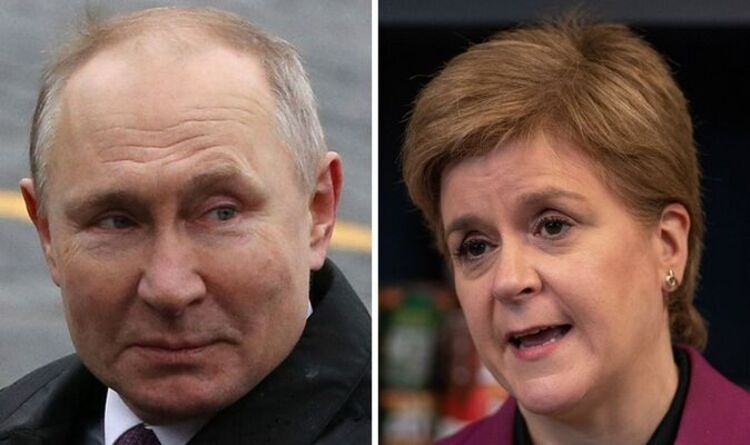 New research suggests that replacing Prime Minister Boris Johnson with one of the frontrunners for the Tory leadership would only boost support for independence in Scotland. A poll of 1,029 Scottish adults found that, should Chancellor of the Exchequer Rishi Sunak take over as Prime Minister, 13 percent of Scots said they would be more likely to support a Yes vote. This is compared to six percent who said they would be more likely to oppose independence.

The percentage increases when Liz Truss is thrust into the frame; the YouGov poll found that her successful campaign would push 15 percent of Scots towards supporting leaving the UK, while just five percent would be more likely to vote No.

The Scottish National Party (SNP) and the Scottish Greens confirmed that there were no plans to stall moving towards holding an Indyref2 in 2023 — despite the growing international disaster in Ukraine, fallout from the coronavirus pandemic and a cost of living crisis.

The war in Ukraine has dug up old concerns about Russia’s involvement in Scotland, specifically a 2020 report that concluded that the Kremlin tried to influence the result of its 2014 independence referendum in favour of independence.

It described how the committee found it was “potentially the first post-Soviet interference in a Western democratic election”.

While the report did not go into the specifics of the interference — with much of its contents redacted by the UK Government — experts had previously claimed that Russia’s efforts were focused on a disinformation campaign online.

Now, as the independence debate picks up again, John Lamont, the Scottish Conservative MP for Berwickshire, Roxburgh and Selkirk, has urged social media platforms to ensure that the interference does not happen again.

Calling for better online defences and for disinformation to be thwarted before it spreads, he told Express.co.uk: “[The report] demonstrates that Putin wants to create as much disruption and chaos as he possibly can.

“Clearly, if Scotland had voted for independence back in 2014, that arguably would have undermined the UK’s position and ability to take action against Russia [today].

“Secondly, I think it shows the need for social media platforms, be it Twitter or Facebook or any others, to be ensuring that the messages and the types of comments that are coming out of the Kremlin ‒ and indeed anybody else ‒ are accurate and can be relied upon, and that people are not manipulating these platforms to promote different types of messages that may be playing into a particular agenda — in this case Putin’s support for disrupting an independent Scotland.

“I think on both fronts it shows what Putin’s capable of and definitely puts a big onus on the social media platforms — and indeed the regulators — to ensure that those platforms are not being used in a disruptive way.”

While there were only a few paragraphs in the 50-page report on Scotland, it cited “credible open source commentary suggesting that Russia undertook influence campaigns in relation to the Scottish independence referendum in 2014”.

These included a reference to incidents already known about.

The report noted: “For example, it was widely reported shortly after the referendum that Russian election observers had suggested that there were irregularities in the conduct of the vote, and this position was widely pushed by Russian state media.

“We understand that HMG viewed this as being primarily aimed at discrediting the UK in the eyes of a domestic Russian audience.”

Some of the propaganda deployed was considerably effective in its reach: over 87,000 people signed a petition demanding a re-vote following the allegations of electoral fraud.

Kevan Jones, a former defence minister, said the evidence made it clear that there was Russian interference in the referendum.

He told the Daily Record: “Short of a large van outside Downing Street, with a billboard on it saying, ’this is what was going on’, what more did the Government need? Why was the decision taken not to look at the referendum?”

And, Stewart Hosie, an MP and SNP member of the committee, shifted the responsibility onto the UK Government, saying it was “astonishing” given the evidence of Russian interference in the 2016 US election and the 2014 independence referendum that the UK Government did not consider in advance what might be done to protect the integrity of the electoral process.

He added: “It is worse than that. The UK Government has actively avoided seeking evidence as to whether Russia interfered.”

In 2017, some experts were already sounding the alarm on potential Russian meddling in Scotland.

Ben Nimmo, an analyst for the US thinktank the Atlantic Council, said pro-Russian propagandists used Twitter, fake videos on YouTube and Facebook accounts to make and then spread false allegations that votes were interfered with to ensure victory for pro-UK campaigners.

In 2017, some experts were already sounding the alarm on potential Russian meddling in Scotland.

Ben Nimmo, an analyst for the US thinktank the Atlantic Council, said pro-Russian propagandists used Twitter, fake videos on YouTube and Facebook accounts to make and then spread false allegations that votes were interfered with to ensure victory for pro-UK campaigners.

While he said he had no concrete proof that the disinformation campaign was orchestrated by the Kremlin, he asserted that there was a clear need for official investigations and internal reviews by social media companies.

“The anger and disappointment felt by many yes voters were entirely sincere [and] those sentiments were fanned by pro-Kremlin trolls, in a manner characteristic of Russian influence operations.”