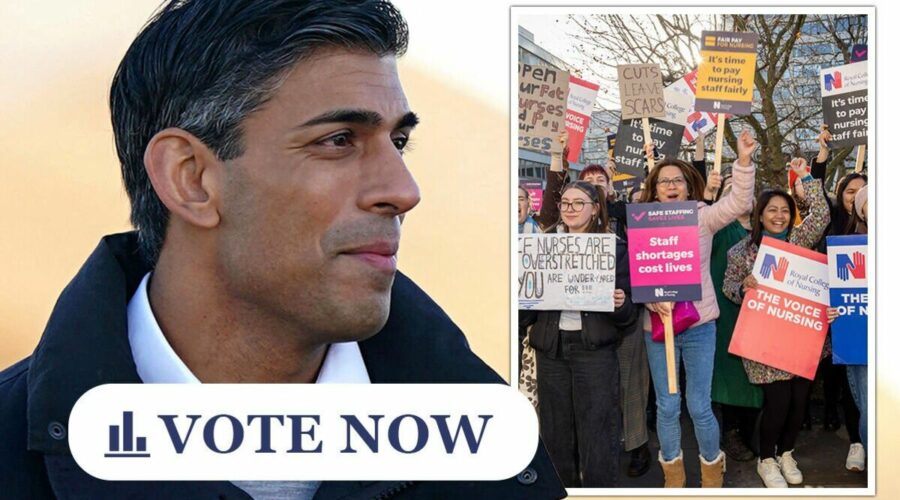 Prime Minister Rishi Sunak reportedly considering putting forward a vote on anti-strike laws before MPs this month as strike action is set to continue for months. RMT union boss Mick Lynch warned rail strikes could continue until June as disputes over pay and conditions remain unresolved. So should the UK Government introduce anti-strike laws? Vote in our poll.

The bill contains proposals for minimum staffing levels during public service strikes with 20 percent of regular rail services required to continue during industrial action. Similar standards of service could be extended to include the NHS, ambulance staff, teachers, border force and fire service. Ministers are also expected to consider imposing tougher conditions to allow strikes to go ahead and could go as far as banning walkouts.

A Government spokesperson said Mr Sunak was “exploring further measures to help minimise disruption and protect the public. Anything we bring forward will rightfully balance the rights of workers to strike with the rights of the public to get on with their daily lives and keep people safe. This work is continuing at pace, and further details will be set out in due course.”

The new legislation may be introduced once Parliament returns from recess on Monday, January 9. However, even if legislation is voted upon later this month it is expected to receive close scrutiny in the House of Lords and not be passed until much later this year. Labour leader Sir Keir Starmer has suggested he would oppose the Bill, while his deputy Angela Rayner has said she wants to repeal all anti-worker legislation.

Dave Penman, general secretary of the FDA union, which represents civil servants, claimed anti-strike legislation would not solve the issue of low pay behind many of the strikes. He told LBC: “It would be a political choice for the Prime Minister, but it’s not going to resolve this. Tinkering with what are already some of the most draconian trade union laws in western economies are not going to address the fundamental problems around this.”

So what do YOU think? Should the UK Government introduce anti-strike laws as industrial action continues? Vote in our poll and leave your thoughts in the comment section below.