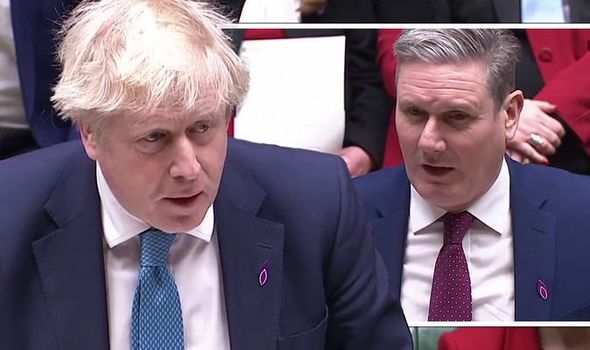 Political journalist Alexander Brown took to Twitter to say: “Don’t want to say I’ve built up PMQs in my head but anything less than Ian Blackford attempting a citizen’s arrest will be a disappointment.” To which Mr Blackford responded: “No pressure then!” Mr Brown shared the exchange with his followers saying: “If you weren’t excited enough for PMQs, Mr Blackford has quite clearly not ruled it out.” The comments come a day after the Metropolitan Police announced they would be conducting a criminal investigation into Downing Street parties that took place in lockdown.

Liz Truss refuses to answer whether Boris Johnson should resign

Liz Truss has refused to answer Kay Burley’s question on whether Boris Johnson should resign.

Asked whether the Prime Minister should resign if he is found to have attended a party, Ms Truss said: “I’m not going to prejudice the findings of the Sue Gray report or indeed, the police investigation.”

To which Ms Burley responded: “You can’t prejudice the report of course, because she’s already done it.”

Ms Truss pointed out that the Prime Minister has apologised for what happened and had done a “fantastic job” delivering Brexit.

‘Boris has to go,’ Rayner rails against Johnson ahead of PMQs

Labour deputy leader Angela Rayner has said members of the public do not need to findings of the Sue Gray report to know Boris Johnson should resign.

Ahead of PMQs, Ms Rayner said: “We don’t need the Sue Gray report to know that Boris Johnson needs to go.

“Sue Gray will simply lay out the facts of what seems be a very clear culture of total disregard for propriety and rules in Downing Street — the culture comes only from the person in charge.

“Soon we will be able to read Gray’s finding for ourselves, but we did not need to see the government so distracted in a time when they need to act.

“All we needed was for the man at the top of British politics to tell the truth, or for the Conservative Party to do the right thing when he refused.”

‘Not ruling it out!’ SNP Westminster leader prepares to go head to head against PM

Reflecting on an exchange in which he suggested Mr Blackford could conduct a citizens arrest, Alexander Brown said: “If you weren’t excited enough for PMQs, Mr Blackford has quite clearly not ruled it out.”

Good morning from London. I’m Tara Fair, I’ll be bringing you all the latest developments on PMQs. Please feel free to get in touch with me as I work if you have a story or tips to share! Your thoughts are always welcome.

26/01/2022 Politics Comments Off on PMQs LIVE: Ian Blackford tipped to carry out ‘citizens arrest’ of Boris Johnson in Commons
Markets