Philadelphia District Attorney Lawrence Krasner, who has been on the forefront of the movement to make the "City of Brotherly Love" a "sanctuary city," was one of several highly progressive names included on a wish list of potential Supreme Court nominees from the liberal organization Demand Justice last week.

Krasner has gained notoriety for his approach as an aggressive criminal justice reformer, including multiple public disputes with the Philadelphia Fraternal Order of Police, an ongoing tiff with the U.S. Attorney for the Eastern District of Pennsylvania — whom President Trump nominated — and his efforts to protect illegal immigrants in Philadelphia from deportation. During his first year in office, for example, he helped end an information-sharing agreement with the federal government that allowed U.S. Immigration Customs and Enforcement (ICE) to see the city's Preliminary Arraignment Reporting System (PARS).

"Let me be crystal clear: I will absolutely be a 'no' vote to provide additional access to PARS for ICE. The current arrangement shares information with ICE in a way that should not continue,” Krasner said in a statement weeks before the city ended the PARS agreement in 2018. "Quite frankly, cooperating with ICE at this time makes our city less safe because it makes undocumented individuals fearful of coming forward to report crimes or testify in criminal cases. That’s simply unacceptable.”

In addition to ending ICE's access to the city's criminal justice database, Krasner has hired an "immigration counsel" to ensure prosecutions would not affect the immigration statuses of victims, witnesses or low-level offenders. Krasner, who ran on a platform of ending mass incarceration, using fewer resources to prosecute minor crimes, opposition to the death penalty and fighting police misconduct, was backed by almost $1.7 in money from liberal mega-donor George Soros, the Washington Free Beacon reported.

The U.S. attorney, William McSwain, denounced the Philadelphia DA this past August after six police officers were shot in an hours-long standoff.

"It started with chants at the DA's victory party – chants of 'F— the police' and 'No good cops in a racist system,'" McSwain said in a statement. "We’ve now endured over a year and a half of the worst kinds of slander against law enforcement – the DA routinely calls police and prosecutors corrupt and racist, even 'war criminals' that he compares to Nazis."

"We have plenty of criminal laws in this city – but what we don’t have is robust enforcement by the district attorney," McSwain continued. "Instead, among other things, we have diversionary programs for gun offenses, the routine downgrading of charges for violent crime, and entire sections of the criminal code that are ignored." 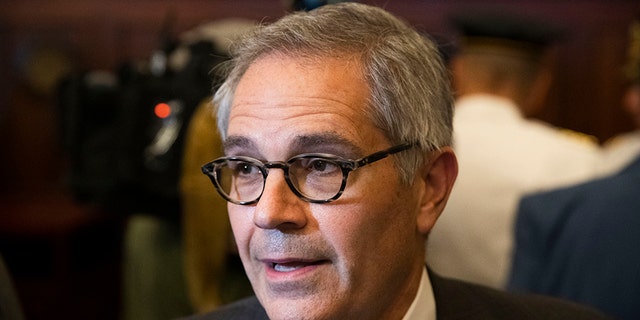 Before his time as the Philadelphia DA, Krasner was a public defender in Philadelphia before founding his own firm that focused on criminal defense and civil rights. His campaign website said he's defended Dreamers — people brought to the U.S. illegally as children — and groups including Black Lives Matter and Occupy Philly.

The list floating Krasner as a potential member of the U.S. Supreme Court, produced by Demand Justice, an organization dedicated to pushing for liberal nominees to federal courts, was designed to encourage Democrats seeking the White House to do the same. This copied a tactic from the 2016 Trump campaign which many analysts credited with solidifying a suspicious conservative base behind the eventual president.

A statement included with the Demand Justice list noted that besides pushing Democrats to name potential high-court nominees before being elected, the group also sought to ensure Democrats' Supreme Court nominees would be sufficiently liberal.

"In releasing this list, we also hope to make clear that the next Democratic president ought to approach the task of nominating judges with a new playbook," it said, "one that prioritizes unabashedly progressive lawyers and legal thinkers, who have all too often been pushed aside."

Notably absent from the list is Merrick Garland, a moderately liberal judge on the D.C. Circuit Court of Appeals, whom Obama nominated to the Supreme Court in 2016 in hopes that he could draw enough votes from the GOP-controlled Senate to be confirmed before the presidential election that year. He never received a confirmation vote in the Senate.

Some other prominent progressives included in the Demand Justice shortlist were Brigitte Amiri, Xavier Becerra and Dale Ho.

Amiri is the deputy director of the ACLU's Reproductive Freedom Project and was the lead counsel challenging the Trump administration's abortion restrictions for unaccompanied immigrant minors, according to the Demand Justice profile of her. In a recent tweet, she said a dissent in a Sixth Circuit case arguing a state could ban abortions of fetuses with Down syndrome was "terrifying."

Becerra, the California attorney general, has been one of the most litigious state attorney generals against the Trump administration and previously served in Congress as a Democrat.

Ho was the lead counsel fighting the Trump administration's effort to put a citizenship question on the 2020 Census and has served as the director of the ACLU Voting Rights Project, according to Demand Justice. He previously served as an attorney with the NAACP Legal Defense and Educational Fund.

At least three other names on Demand Justice's list have been on cases against the Trump administration in some way or another. Only eight of the 32 names have served as judges.

Critics on the right dismissed the list as a left-wing pipe dream, including Carrie Severino, the chief counsel and policy director of the Judicial Crisis Network who co-authored "Justice on Trial," a book chronicling the confirmation process of now-Justice Brett Kavanaugh.

"Amazing: there must be hundreds of federal judges Obama put on the courts, and only 4 make this list," she tweeted in response to the list's release. "This list would have been way too liberal for Obama."