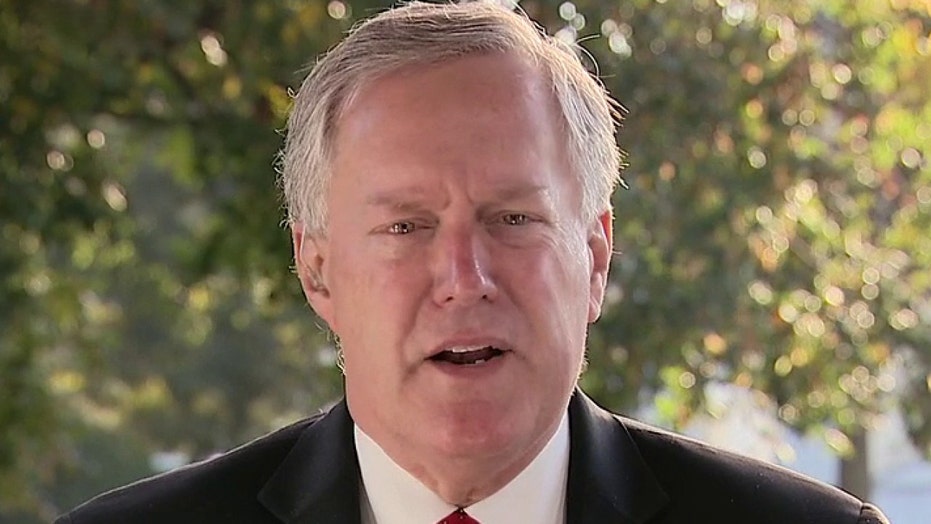 "It’s hard to see any clear, sane path on what he’s doing but the fact is he saw the political downside of his statement of walking away from the negotiations," she said during an interview on ABC's "The View." "He’s rebounding from a terrible mistake he made yesterday, and the Republicans in Congress are going down the drain with him on that."

Although Trump tweeted on Tuesday that he was postponing negotiations until after the Nov. 3 presidential election, he later appeared to reverse course, calling for lawmakers to send out a fresh round of $1,200 stimulus checks and provide additional funding to U.S. airlines and small businesses.

"The House & Senate should IMMEDIATELY Approve 25 Billion Dollars for Airline Payroll Support, & 135 Billion Dollars for Paycheck Protection Program for Small Business. Both of these will be fully paid for with unused funds from the Cares Act. Have this money. I will sign now!" Trump tweeted Tuesday night.

"If I am sent a Stand Alone Bill for Stimulus Checks ($1,200), they will go out to our great people IMMEDIATELY. I am ready to sign right now. Are you listening Nancy?" he posted about 30 minutes later.

Pelosi and Treasury Secretary Steven Mnuchin spoke on the phone Wednesday morning to discuss a second bailout for the beleaguered airline industry. Last week, U.S. airlines began cutting 35,000 jobs following the expiration of a $25 billion bailout fund that was created earlier this year as part of the CARES Act. Under the terms of the agreement, airlines were prohibited from cutting jobs or reducing workers' pay through Sept. 30.

While the California Democrat appeared to support another round for airline aid (according to her spokesperson, she told Mnuchin to review a bill that would allocate about $28 billion to airlines through the end of March), she seemed to reject the notion of passing a series of smaller, individual packages.

"It is important for us to come to this agreement," she said, calling it a "missed opportunity" to not pursue a comprehensive relief deal during the pandemic-induced crisis.

Asked whether she would go to the White House to negotiate directly with Trump, Pelosi said: "I don’t want to go anywhere near the White House. It’s one of the most dangerous places in the country."

TRUMP LASHES OUT AT 'HEARTLESS' DEMS OVER STALLED-OUT VIRUS RELIEF

The president announced early Friday that he and first lady Melania Trump had tested positive for COVID-19. Since then, a series of people in and around Trump's orbit, including his senior adviser Stephen Miller and White House press secretary Kayleigh McEnany, have contracted the virus.

Although Democrats and Republicans broadly agree that another bill is necessary to aid the economy's recovery, they sharply disagree over the size and scope of it. House Democrats passed a $2.2 trillion aid package last week, down from the initial $3.4 trillion offer, while the Trump administration countered with a $1.6 trillion plan. Pelosi rejected that as "inadequate."

A key sticking point in negotiations is aid for state and local governments, which Trump and Republicans have characterized as a "blue-state bailout." The president reiterated that on Tuesday, saying Democrats "just wanted to take care of Democrat failed, high crime, Cities and States. They were never in it to help the workers, and they never will be!"

TRUMP REJECTS DEMS' CORONAVIRUS RELIEF PROPOSAL, CALLS OFF NEGOTIATIONS 'UNTIL AFTER THE ELECTION'

Instead, the president said that he had asked Senate Majority Leader Mitch McConnell, R-Ky., to "focus full time" on confirming Judge Amy Coney Barrett to the Supreme Court.

“I think his view was that they were not going to produce a result, and that we needed to concentrate on what’s achievable,” he said.

But that aid is beginning to expire, and lifelines that propped up the economy in the early weeks of the pandemic – like the $670 billion Paycheck Protection Program, a one-time $1,200 stimulus check and sweetened unemployment benefits – lapsed weeks ago.

There are roughly 10.7 million more out-of-work Americans than there were in February before the pandemic hit, according to the Labor Department's September jobs report.

07/10/2020 Politics Comments Off on Pelosi slams Trump for shutting down coronavirus relief talks, calls it 'a terrible mistake'
World News