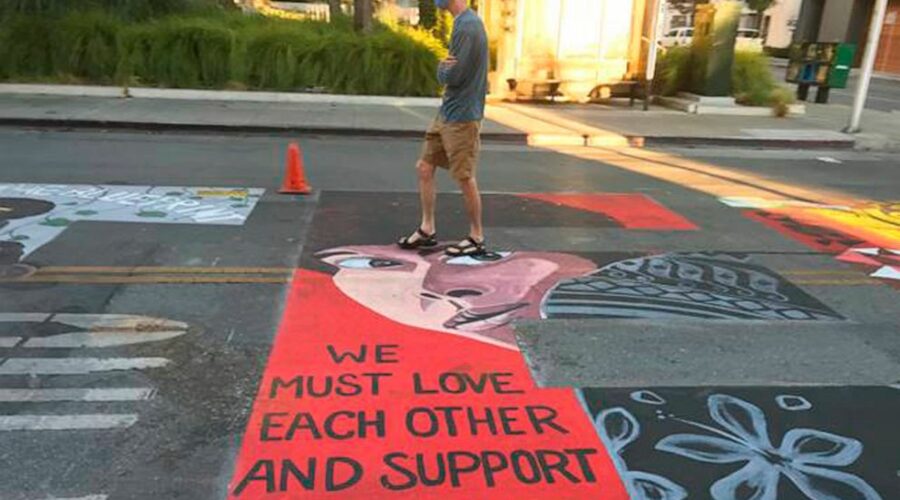 PALO ALTO, Calif. — Five officers have sued the Silicon Valley city of Palo Alto, saying it allowed the creation of a Black Lives Matter mural with anti-police images that constituted harassment and discrimination against law enforcement.

The mural was painted last June in the street across from City Hall following the killing of George Floyd by Minneapolis Officer Derek Chauvin. It was to remain on the street for up to a year but it was gone by November, according to The Daily Post in Palo Alto, which first reported the lawsuit Wednesday.

One of the images was of Joanne Chesimard, who goes by the name Assata Shakur and was convicted in the 1973 killing of a New Jersey state trooper, according to the lawsuit filed last month in Santa Clara County Superior Court. She later escaped from prison and fled to Cuba. Shakur has yet to be found.

The lawsuit also says the mural included the logo of the New Black Panthers, which is identified by the Southern Poverty Law Center as a hate group that has encouraged violence against white and Jewish people and law enforcement.

“Law enforcement officers, including Plaintiffs, were forced to physically pass and confront the Mural and its offensive, discriminatory, and harassing iconography every time they entered the Palo Alto Police Department,” the lawsuit said.

The officers complained to officials that the mural violated the state Fair Employment and Housing Act. But the city “ratified the conduct and insisted that it remain and persist,” according to the lawsuit.

In July 2020, the National Police Association demanded the mural’s removal, saying it was an “atrocity” to celebrate a fugitive convicted cop killer in front of City Hall.

City Attorney Molly Stump told the newspaper that the city has not been served with the lawsuit. She did not immediately return a phone message Thursday from The Associated Press seeking comment.