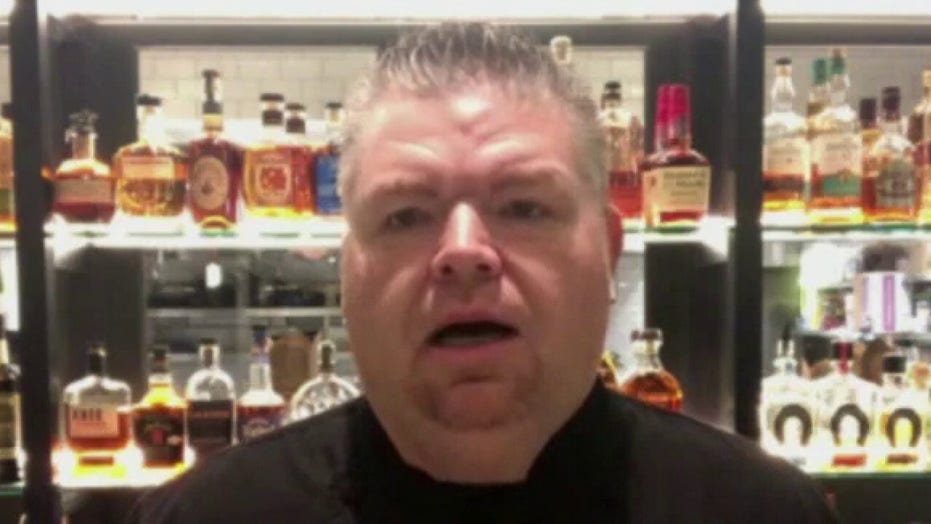 Chef Rodney Worth says he is in ‘survival mode’ as he defies California outdoor dining bans that are devastating small businesses.

Big city restaurant owners in New York and California are frustrated after lawmakers banned indoor dining and flip-flopped on bathroom restrictions, driving away even more of their customers amid the worsening coronavirus pandemic.

In New York, local lawmakers implemented a new rule Thursday barring outdoor diners from using indoor restrooms at restaurants, only to backtrack shortly after an outcry from business owners and patrons alike.

New York City Mayor Bill de Blasio said Friday that a fact sheet sent out by the city the previous evening, which barred customers from entering the interior of restaurants for any reason, was "a mistake." The rules are set by the state, not the de Blasio administration, said Bill Neidhardt, the mayor's press secretary.

City officials consulted with Albany, where officials agreed to change the rule and allow outdoor diners to use indoor restrooms, de Blasio Press Secretary Avery Cohen wrote in a post on Twitter.

The dining guidance also said customers must place their takeout orders "remotely" either by phone or internet, barring walk-ins.

Indoor closures, which have been in effect for about a week, come as a massive snowstorm buried New York City under nearly two feet of snow, also forcing full shutdowns of outdoor dining as well, dealing a double whammy to struggling business owners.

Melissa Fleischut, president and CEO of the New York State Restaurant Association, called the closures, ordered by Democratic Gov. Andrew Cuomo, a "huge blow" to the industry, which has already been crippled by the pandemic.

"This action will inevitably result in massive layoffs and vast closures right before the holidays," Fleischut told the Associated Press, calling the move "unfair and devastating."

The closures come as Congress stalls on another coronavirus stimulus package, and small business owners are uncertain if they will receive any more financial support from the federal government.

"It will be the last straw for countless more restaurants and jobs," Andrew Rigie, executive director of the NYC Hospitality Alliance, told the AP. "The restrictions begin on Monday with zero economic support for small businesses that are already struggling to survive."

SEN. HAWLEY WILL NOT CONSENT TO SENATE RECESS WITHOUT STIMULUS

Cuomo acknowledged the hardship restaurants are facing but insisted that the priority must be controlling the virus.

"If we don’t slow the spread and we overwhelm the hospital system — we get to a red zone… then every restaurant goes to zero indoor, outdoor zero. That’s the worst-case scenario," he added.

The state set a new record Friday with 12,697 new cases of COVID-19, the highest single-day total, on the same day Cuomo reported a record number of tests had been conducted. Daily deaths surpassed 100.

Complaints from restaurant owners in California are almost identical to those in New York, as they face a similarly dire plight. Some counties have placed bans on outdoor dining as well, limiting eateries to takeout only.

"We're just trying to stay afloat right now," Chef Rodney Worth, owner of the Peasant and the Pear, said on Fox News Channel. "We really don't know what to do."

"We're, like, dying a death of a thousand cuts right now," Worth said.

On Thursday, the state reported 52,000 new cases in a single day — equal to what the entire U.S. was averaging in mid-October — and a one-day record of 379 deaths. More than 16,000 people are hospitalized with the coronavirus across the state, more than triple the number a month ago.