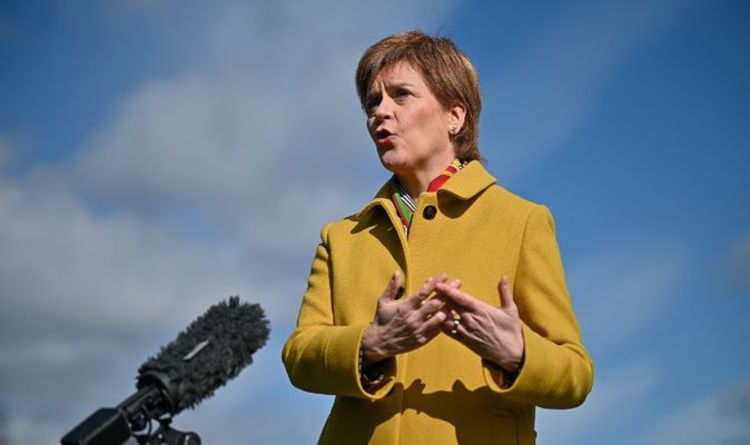 Former Scottish Conservative MSP Michelle Ballantyne has slammed “spin” for Nicola Sturgeon over the shortage of lorry drivers in the UK. Ms Ballantyne tore into the Scottish First Minister on GB News after Ms Sturgeon made her keynote speech to the SNP Party Conference in which she appeared to argue Brexit had caused food shortages. Ms Ballantyne attacked the claims as another example of Ms Sturgeon turning an issue into a cause for Scottish independence.

Ms Ballantyne told GB News: “They spin a good yarn and there is no doubt about it Nicola Sturgeon is very good on her feet.

“She is very good at turning the tables on everything that happens.

“You only have to take apart the speech to has just given today.”

JUST IN: Sturgeon crushed as independence will ‘blow £12bn hole in budget’

“It is full of things that would lead the population to think ooh dear, oh gosh, you know Brexit has caused food shortages.

“But anyone with any sense or research knows that actually, those food shortages are due to the difficulties in moving goods around.

“Because of the Covid restrictions and lorry drivers are having real problems crossing boundaries and there is a difficulty in transporting goods.

“Lorry drivers aren’t willing to go and end up quarantined somewhere for weeks on end.”

Dan Wootton grills SNP politicians on plans for Indyref2 in 2023

“So you know she takes something that is happening and she spins it,” added Ms Ballantyne

“And presents it in such a way that it becomes an argument for why Scotland should be making a huge decision that would probably be extremely disastrous for our economy.”

Ms Ballantyne told Express.co.uk: “Ms Sturgeon’s strange defence of Jane Godley’s offensive offerings appear to suggest that as she herself has made mistakes and apologised Ms Godley’s apology should wipe the slate clean.

“Whilst branding the comments unacceptable, it is clear that In the world of Sturgeon it’s not what is said that matters but who has said it.

“Jane Godley must apparently be forgiven for her disgraceful utterings because they were simply a ‘misunderstanding’ by a well-meaning comic and outspoken supporter of independence, no harm meant!

“But in the real world Ms Godley was the SNP choice to front their campaigns, their comic genius whose sharp tongue and caustic vile wit were seen as a weapon against the enemies of their cause.

“Sturgeon encourages and promotes these foot soldiers and her gritted teeth statements of surprise and horror when their true nature is exposed is as shallow as Sturgeon’s support for the Union.”