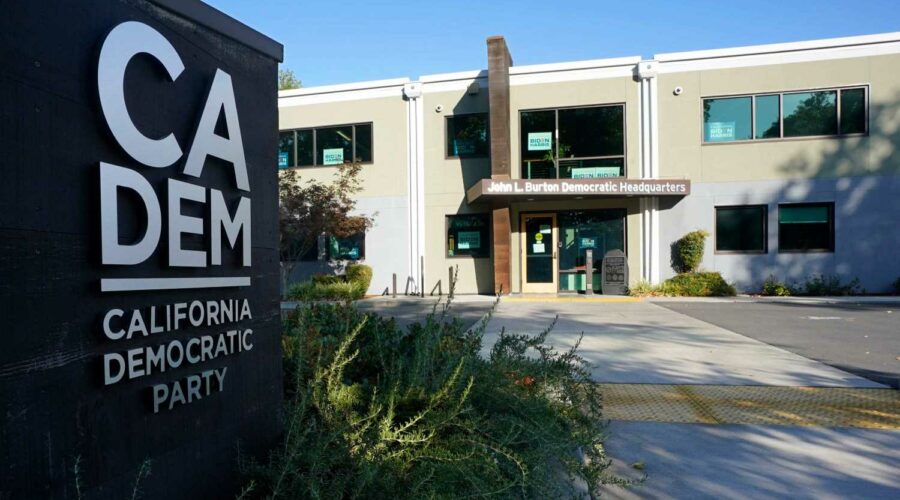 The men were charged Thursday in a San Francisco federal court with conspiracy to destroy a building affecting interstate commerce and other related crimes, in a scheme to attack the John L. Burton Democratic Headquarters in Sacramento.

Ian Rogers, 45, of Napa, and Jarrod Copeland, 37, of Vallejo, began plotting a series of "specific, detailed, and serious" plans to attack Democrats with incendiary devices after the 2020 presidential election, according to court documents. The men also attempted to gain support from militia groups in hopes that their attack would spark a movement to overthrow the government.

The charges come as authorities are on heightened alert for potential political violence following the Jan. 6 invasion of Capitol Hill by supporters of then-President Donald Trump who sought to block the certification of Joe Biden's victory in the presidential election.

"Do you think something is wrong with me how I'm excited to attack the democrats?" Rogers asked Copeland on a messaging application last December.

Copeland, who was arrested Wednesday, later told police that he didn't take Rogers' statement seriously and was only listening to him "blow off steam."

But court records indicate that Copeland encouraged Rogers' discussions about violence, with his messages stating that they would take action to keep Trump in office.

"If we see [Trump] can't win we strike," Copeland said in one message. "If they don't listen to trump they will hear us."

Court records state that Copeland had joined the military in 2013, but was arrested for desertion twice and was discharged in lieu of court material.

The two men continued discussions of violent attacks on Democrats after election results were certified on Jan. 6, according to the charges. Prosecutors alleged that the Jan. 6 insurrection at the Capitol had inspired them, citing Copeland's excited messages on that day that fantasized about violence.

"Damnit I wanna roll into sac geared up," another message of his said, referring to Sacramento and his military-style tactical gear and weapons.

The Democratic Headquarters in Sacramento was selected as their first target to attack with explosive devices, and the two men had discussed attacking the Twitter and Facebook headquarters next, prosecutors charged.

"Heads must be taken," Copeland said. "I don't like to think it but I think we will have to die for what we believe in."

Rogers was later arrested on Jan. 15 for possessing five pipe bombs and remains in state custody in Napa County for multiple weapons charges. In total, authorities seized nearly 50 firearms and thousands of ammunition from his home and business, according to a criminal complaint.

Materials used to make destructive devices were also found at his business, including black powder, pipes and end camps and several manuals, such as "The Anarchist Cookbook," the "U.S. Army Improvised Munitions Handbook" and "Homemade C-4: A Recipe for Survival," the complaint said.

Authorities also reported discovering a sticker on Rogers' vehicle window that is commonly used by Three-Percenters.

A day after Rogers' arrest, Copeland purged all past communications with Rogers in fear of being traced.

Copeland then joined the Three-Percenters and later assumed an officer position within the militia group. Court records also discuss Copeland's use of steroids, noting his $1,200 purchase worth of steroids in December.

"The danger he poses to anyone with opposing political views is obvious," the court records said.

If convicted, the two men could face a maximum sentence of 20 years in prison, a three-year term of supervised release and a $250,000 fine for the conspiracy charge, according to Department of Justice.

Rogers' attorney declined CNBC's request for comment and Copeland's attorney could not be reached for a comment.

"Firebombing your perceived political opponents is illegal and does not nurture the sort of open and vigorous debate that created and supports our constitutional democracy," said U.S. Attorney Stephanie M. Hinds. "The allegations in the indictment describe despicable conduct. Investigation and prosecution of those who choose violence over discussion is as important as anything else we do to protect our free society."

"We are relieved to know the plot was unsuccessful, the individuals believed to be responsible are in custody, and our staff and volunteers are safe and sound," Hicks said in a statement on Thursday. "Yet, it points to a broader issue of violent extremism that is far too common in today's political discourse."

CNBC's Dan Mangan and Amanda Macias contributed to this report.