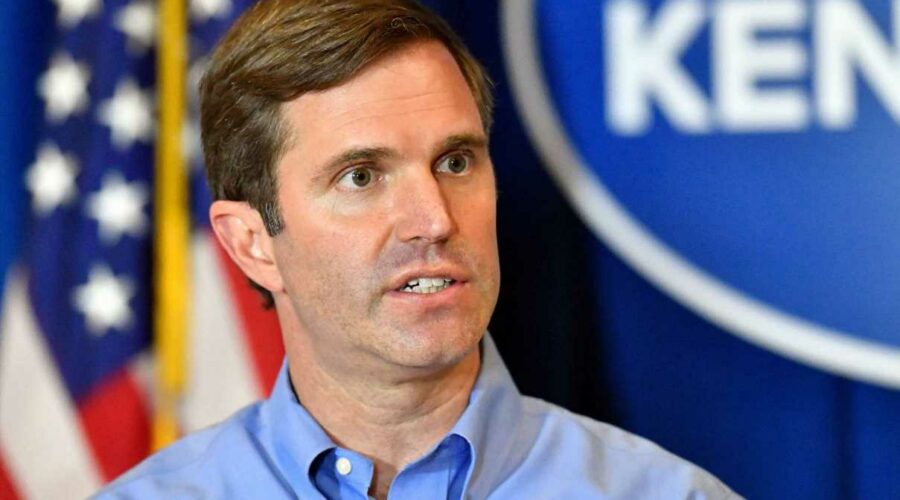 Republican legislators in Kentucky are preparing to strip Democratic Gov. Andy Beshear of many of the executive powers he has wielded in an effort to control the Bluegrass State’s coronavirus outbreak, escalating the state’s political war over COVID-19 measures and the governor’s authority in the midst of a worsening pandemic.

For months, Republican officials, led by Attorney General Daniel Cameron, have relentlessly challenged Beshear’s use of executive power to mandate mask-wearing and place restrictions on businesses, churches, restaurants and other public gathering places. The Kentucky Supreme Court unanimously ruled in November, however, that dozens of Beshear’s restrictions were legal under the executive powers the Legislature had previously granted the state’s governors.

So the Republicans who hold veto-proof supermajorities in both chambers of the state Legislature are likely this week to begin the process of formally curbing those powers, even as both Beshear and his approach to the pandemic remain popular among a majority of Kentuckians, according to a recent poll.

More than 2,700 Kentuckians have died from COVID-19 since March, and Beshear has warned throughout the pandemic that the GOP’s opposition to mask mandates and other restrictions would only result in the sort of outbreaks that have occurred in nearby states like Tennessee, which is currently home to one of the nation’s highest rates of infection per capita. Kentucky reported more than 650 deaths during December alone, setting a record for the fourth straight month.

State Senate Majority Floor Leader Damon Thayer (R) told reporters Monday that he wasn’t sure when Republicans would vote to limit Beshear’s powers, the Lexington Herald-Leader reported. But various bills Republicans could push through as soon as this weekend would limit Beshear’s ability to restrict capacity at or close churches, businesses and other establishments by prohibiting any mandates that go beyond guidelines provided by the U.S. Centers for Disease Control and Prevention, said state Rep. Jason Nemes, a Republican. 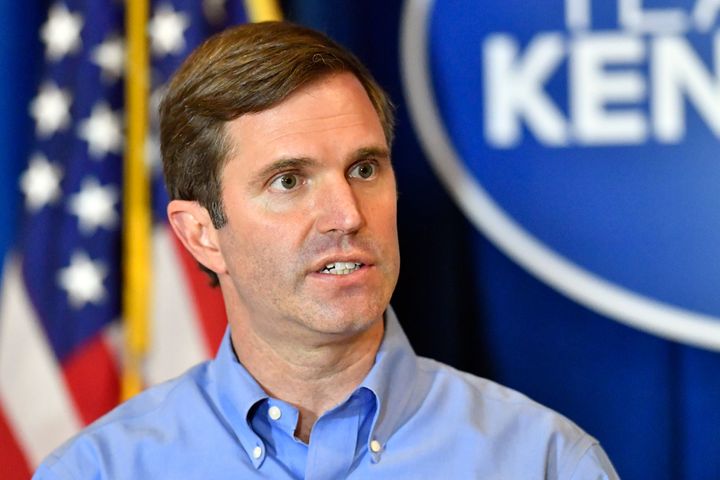 Most of the bills would require the governor to seek approval from the part-time Legislature to extend any emergency order longer than 30 days, while others would impose an even tighter timeline. A bill pre-filed in the state Senate would put the question of the governor’s power before Kentucky voters, although it seems less likely to advance because it wouldn’t take effect until at least 2023.

Nemes insisted that the GOP’s efforts were about ensuring the enactment of better policies that have buy-in from both parties, rather than a purely political attempt to squelch the power of the only Democrat to hold statewide office in Kentucky.

“If it’s going to be a prolonged state of emergency, then one person ― whether they’re Republican or Democrat ― should not have the kind of power that Gov. Beshear has enjoyed,” Nemes told HuffPost on Monday. “We’ve learned from the COVID situation, but it’s not just directed toward COVID. The bottom line is no single human being should have [that] kind of authority over all Kentuckians’ lives and businesses, without any checks and balances. And that’s what we intend to infuse into the system.”

Democrats don’t buy that Republicans would enact similar restrictions on one of their own, and also argue that the 30-day (or shorter) requirement for legislative approval would limit any governor’s ability to respond to a crisis, especially one as broad as a global pandemic. Beshear’s actions are both legal and practical in a state where the Legislature is active for a short period each year, said Marisa McNee, the deputy executive director of the Kentucky Democratic Party.

The Kentucky Supreme Court ruling made it clear that Beshear’s orders are “an executive function and the governor is exercising his executive power,” McNee said, adding that she has “yet to hear” any justification, from Nemes or anyone else, for the sort of limitations Republicans are proposing.

The Kentucky GOP’s efforts to thwart Beshear’s response to the pandemic have largely been relegated to courtrooms and social media since the state Legislature adjourned its 2020 session in mid-April, when Kentucky’s outbreak and the measures in place to control it were still relatively modest.

Opposition to Beshear’s measures intensified later in the spring, particularly among right-wing conservatives: At a May rally in Frankfort, the state capital, a protester with ties to the far-right 3 Percenters paramilitary group hanged an effigy of Beshear from a tree outside the governor’s mansion. 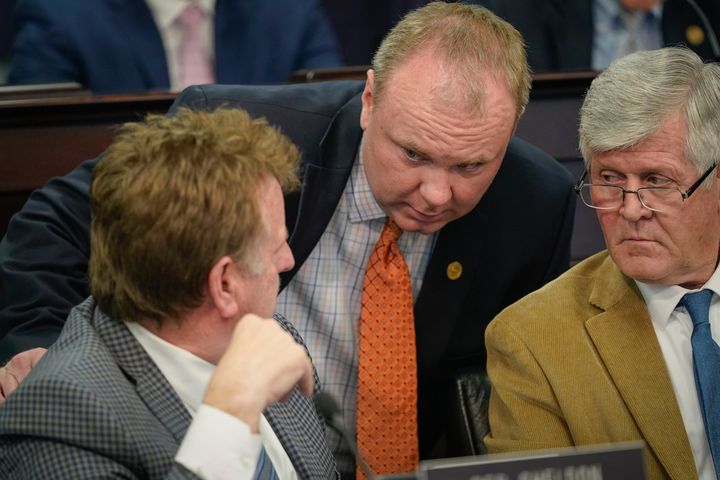 GOP lawmakers and the Republican Party of Kentucky broadly condemned the act, which the protester said was inspired by Beshear’s COVID-19 restrictions. But Beshear castigated Republicans for creating the atmosphere in which the incident occurred by politicizing pandemic restrictions and attending rallies where legislators and protesters alike painted Beshear as an authoritarian.

“You cannot fan the flames and condemn the fire,” he said.

Some Republican lawmakers have continued to openly defy Beshear’s orders against indoor dining and other activities, and on Twitter, GOP legislators have spent months counting down the days until Tuesday, when they reconvened with an even tighter grip on power after swamping Democrats and picking up more than a dozen seats across both chambers in November’s elections. Those results, GOP leaders have argued, give them a mandate to roll back Beshear’s executive powers the minute they take office this week.

On Tuesday, roughly a dozen protesters called on Republicans to impeach Beshear during a demonstration outside the state Capitol, where Louisville Courier-Journal photographer Matt Stone captured an image of one sign, apparently directed at the governor, that said, “Make hanging traitors great again.”

Nemes, a former clerk for the Kentucky Supreme Court, said he agreed with its ruling and that the statute that created broad executive powers was the problem, although he conceded that few of his colleagues likely share that view. Where the GOP is united, Nemes said, is in the belief that some of Beshear’s orders ― including those placing temporary restrictions on indoor dining, retail and church services ― have been “ham-handed” and overly broad uses of powers Nemes argued were designed to allow governors to respond to floods and other natural disasters.

“The problem is that there’s no nuance in these orders,” Nemes said. “There’s a lot of arbitrariness and overbreadth.”

Kentucky Democrats, however, argue that Republicans are trying to exact political revenge on a governor who narrowly defeated former Gov. Matt Bevin in 2019, a victory that shocked a GOP that thought it had finally buried its Democratic opponents for good.

In Democrats’ eyes, the efforts to restrict Beshear’s authorities are akin to the sort of power grab North Carolina Republicans pulled in 2016, when an outgoing governor and GOP lawmakers drastically reduced the executive powers of Democratic Gov. Roy Cooper before he took office.

A poll the Kentucky Democratic Party circulated Monday found that 59% of Kentuckians approve of Beshear’s job performance, with a similar number supporting his handling of the pandemic. More than three-quarters of Kentuckians, including 66% of Republicans, favor a mask mandate, the poll, which the Democratic polling firm Garin-Hart-Yang Research conducted in December, found. (The findings are in line with national numbers on masks.)

Just 37% of voters approve of the GOP Legislature, the poll found, a number Kentucky Democratic Party Chairman Colmon Elridge used to assert that the state’s Republicans are “drunk with power” and operating with “little moral compass.”

“Kentuckians overwhelmingly trust Governor Beshear to make the right decisions to keep themselves and their loved ones safe,” Elridge said in a statement. “[Republicans] have engaged in petty partisan attacks on our governor in a difficult time for our state, and as a result, the public does not trust them. They’ve objected to life saving recommendations and actions because they have no other agenda than to fight this governor.” 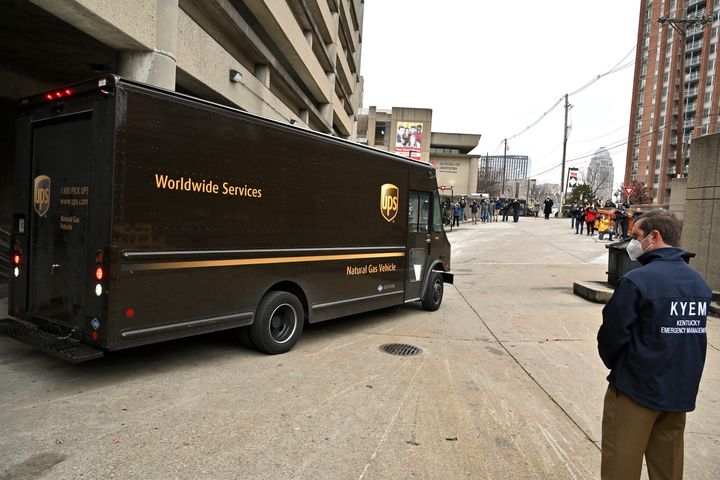 Kentucky has fared better than many of its neighbors ― most of which have taken more relaxed approaches to pandemic restrictions ― and independent polls conducted over the last eight months have also shown high marks for Beshear’s handling of it.

Nemes, who considers himself a moderate, rejected the idea that Republicans are playing politics, insisting that he supports many of Beshear’s ideas but wanted the governor to have to consult the Legislature to utilize emergency powers for long periods of time, an argument Republicans have made during previous challenges to Beshear’s mandates.

Beshear brushed aside those suggestions in an interview with HuffPost in July, painting his Republican counterparts as self-interested hypocrites who have little interest in working together to limit the spread of the virus. “These officials that think that I should confer with them on a mask mandate even today are refusing to wear masks,” Beshear said in July, as Cameron and other Republicans challenged a temporary mask mandate. “And you can’t have it both ways. You can’t challenge a mask mandate and say you support one.”

Republicans hold 75 of 100 seats in the Kentucky House of Representatives and a 30-8 majority in the state Senate, meaning there’s not much Democrats can do to stop them from imposing limits on Beshear.

“They’ll pass,” Nemes said of the bills Republicans could speed through the Legislature this week. “There’s no question.”