The cause of Thursday’s massive fire at the port of Beirut — a month after blasts there killed 190, injured over 6,000, and destroyed much of the city’s eastern coastal area — is still unknown. But the fire has re-traumatized Lebanese and again thrown the city into panic.

While Lebanon continues to disintegrate politically, it may well be sheer folly to expect peace or stability to erupt any time soon in this volatile, strategic region.

In a statement, the Lebanese army said that the fire broke out in a warehouse in the port’s duty-free market, where highly flammable oil and tires have been stored. Just days ago, officials announced the discovery of an additional four tons of ammonium nitrate at the port. The neglectful storage of the unstable chemical is believed to have sparked the initial blasts that shook the city Aug. 4.

FIRE BREAKS OUT AT BEIRUT PORT A MONTH AFTER DEADLY EXPLOSION

As usual, the Lebanese government, which has done little to help victims of the initial blasts or the 300,000 displaced citizens return home, initially had little to say about the new fire. Beirut’s Gov. Marwan Abboud only urged residents to avoid the port "for their own safety" and allow firefighters to contain the blaze, the state news agency NNA reported.

The fire will surely compound the sense of utter despair and misery among Lebanese, who were already suffering through the worst economic crisis in decades, soaring coronavirus rates, and gross government corruption and mismanagement.

The August blasts sparked renewed protests of government graft and incompetence, which in turn prompted Lebanon's government to resign and brought demands that President Michel Aoun step down.

But the ongoing turmoil will also increase pressure on Hezbollah, the Iranian-backed militant Lebanese Shiite group that the U.S. calls a terrorist organization. Hezbollah constitutes a “state within a state” in Lebanon and has for some time effectively controlled not only the Beirut port, but the Lebanese government itself.

While President Trump and son-in-law and senior adviser Jared Kushner deserve enormous credit for brokering the peace deal between the United Arab Emirates and Israel — a right-wing Norwegian official nominated Trump for the Nobel peace prize this week— almost no one thinks that progress in the Gulf is likely to lead to peace between Israel and the Palestinians, much less Israel and Lebanon.

Although Middle Eastern and Western governments have long despaired about Lebanon’s archaic political system and the internal chaos it has spawned, countries in the Levant and the U.S. have an interest in what happens inside Lebanon. The nation’s devastating civil war among its various political factions and religions ended in 1990.

Israel, Lebanon’s neighbor to the south, continues to be alarmed by Hezbollah’s growing stockpile of over 70,000 ever-more accurate rockets and missiles and by the frequent efforts by the so-called “Party of God” and its proxies to infiltrate Israel and conduct terrorism there. 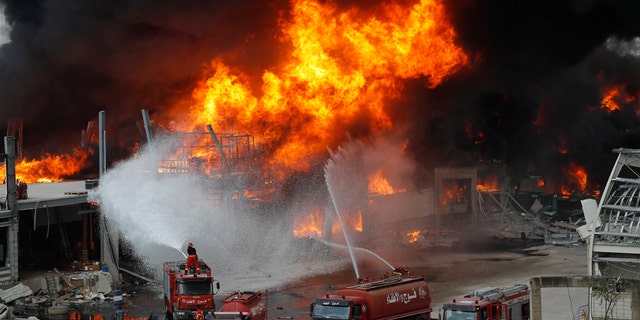 Fire burns in the port in Beirut, Lebanon, Thursday, Sept. 10. 2020. A huge fire broke out Thursday at the Port of Beirut, triggering panic among residents traumatized by last month’s massive explosion that killed and injured thousands of people. (AP Photo/Hussein Malla)

Iran, which helped create and finance Hezbollah in the early 1980s, is determined to do whatever is necessary to keep its proxy in power. Teheran uses Syria, now controlled by Russian and Iranian-back President Bashar Assad, to ship rockets, missiles, and money to Hezbollah through a land bridge that Israel attacks whenever its intelligence services can pinpoint the movement of crucial shipments of men and materiel.

Assad, too, has an interest in Lebanon’s political mess. Hundreds of thousands of his citizens fled Syria’s civil war and found shelter and relative safety there.

The political mess in Lebanon also raises questions about the wisdom of President Trump’s understandable, but perhaps overly precipitous, election-fueled desire to remove U.S. troops from the region.

On Wednesday, the U.S. announced that it was preparing to reduce American troops in Iraq from 5,200 down to 3,000 by the end of this month and provided more information about the planned withdrawal of U.S. forces from Afghanistan from 8,600 to 4,500 by late October.

Marine Gen. Kenneth “Frank” McKenzie, the commander of U.S. Central Command, told reporters that while Iraqi security forces are increasingly capable of fighting remnants of the ISIS fighters still seeking to reconstitute their caliphate within Iraq, the Iraqi military is not yet ready to fight without U.S. support.

Ending America’s “endless wars” in the Middle East is an understandable goal on the eve of the 19th anniversary of the Sept. 11, 2001 terrorist attacks and America’s war in Afghanistan to destroy Usama bin Laden, Al Qaeda, and drive their Taliban hosts from power.

But as Americans should have learned from President Barack Obama’s initial withdrawal of U.S. forces from Iraq, which enabled the Islamic State to eventually control territory the size of Britain, terrorism and chaos in the region do not respect national borders. Trouble in the Levant may not be contained there.