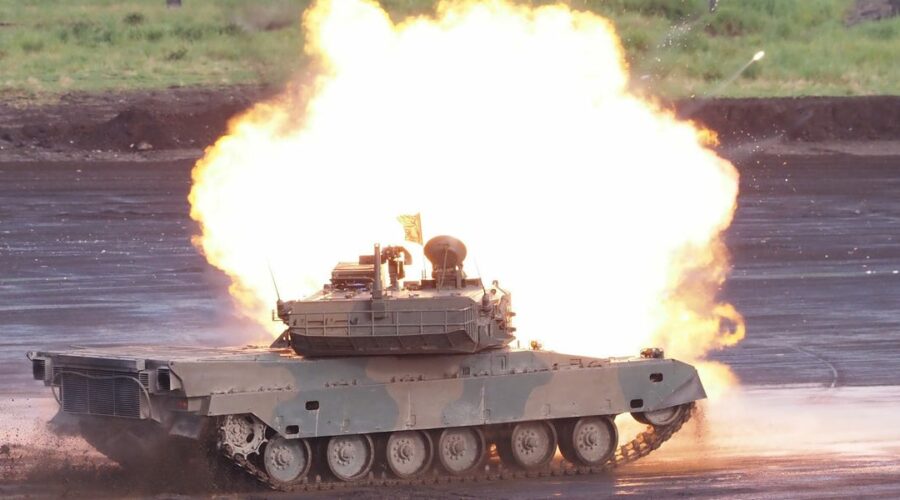 Despite a few successes early in World War II, Japanese armor was hopelessly outclassed by Allied tanks as soon as they arrived in large numbers.

Those experiences and the threat of a Soviet invasion led the Japanese to put much more effort into post-war tank designs. By the 1990s, Japan had a large and capable armored force.

But the Japan Self Defense Force (JSDF) has had to recalibrate in recent decades.

The threat from a rising China has forced Japan’s Ground Self Defense Force (GSDF) to shift from an armor- and artillery-intensive force based in its north — where it would’ve responded to a Soviet invasion — to a more mobile one able to reach southwestern Japan at a moment’s notice.

To do this, the JSDF is making a number of changes, including investing heavily in transportation capability, new armored vehicle designs, and reforming the GSDF’s tank arm.

Fending off the Soviets 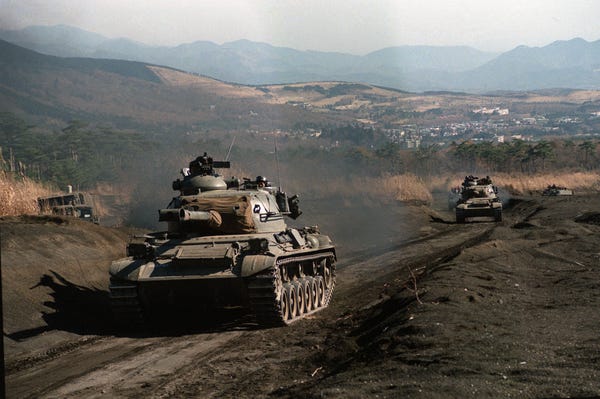 Japan’s tank force was actually quite modern and innovative during its development between the world wars. But while Germany and the Allies had the industrial capacity to update or create new tanks during World War II, Japan’s industry was comparatively limited.

Moreover, since Japanese plans in that war involved pushing south into areas where massive tank battles were unlikely, most funding and resources went to its navy and air services.

After the war, Japan — now with access to Western technology and designs and convinced of the importance of tanks — focused much more on developing a capable armored force to fend off the Soviets.

For most of the Cold War, Japan’s tank force was made up of the Type 61 and Type 74 main battle tanks, armed with 90 mm and 105 mm guns, respectively. They were both capable designs for their time and were fielded in large numbers.

In 1990, the GSDF introduced the Type 90. At 50 tons and with a 120 mm gun, it is by all accounts a first-rate tank. Equipped with modular composite armor, a laser rangefinder, fire-control computer, thermal and night vision, and an autoloader, it is similar to Germany’s Leopard 2A4.

The Japanese believed Hokkaido, the northernmost of the home islands and the closest to Soviet territory, would be the frontline of any invasion, and most of Japan’s tanks were stationed there.

By 1976, the GSDF had some 1,200 tanks and about 1,000 artillery pieces, mostly in Hokkaido, where much of that armored force is still stationed. 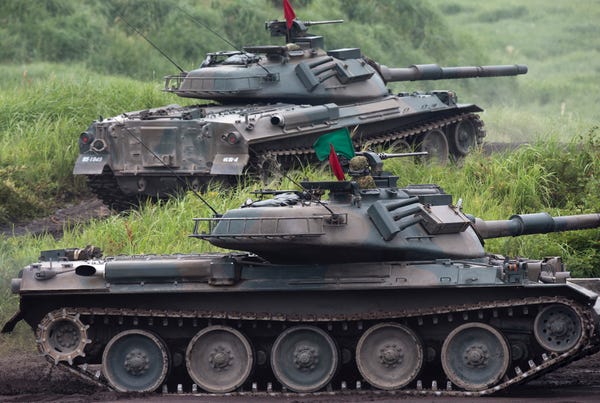 The threat of Russian invasion was virtually nonexistent after the Cold War, and the JSDF decided to cut down on the overall number of tanks, which fell from about 900 in service in 1995 to about 570 now.

The JSDF plans to reduce the total to 300 in the coming years.

At 48 tons fully loaded, the Type 10 is lighter and more maneuverable than the Type 90. Whereas the Type 90’s size limits it to operating in Hokkaido and around Mt. Fuji, the Type 10 can operate anywhere Japanese law allows. 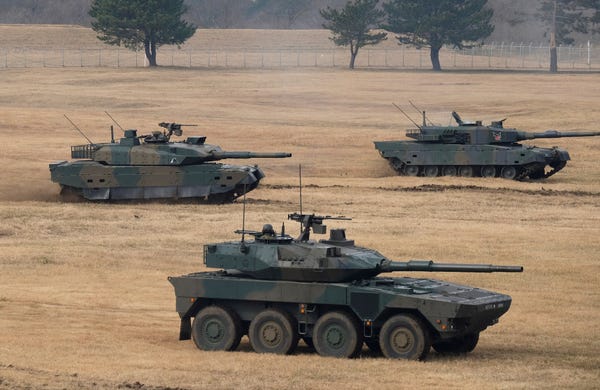 The Type 10 has modular ceramic composite armor with nano-crystal steel. The modules can be added or removed depending on mission or damage. It also has a 120 mm gun and an auto loader.

The electronics suite is perhaps the Type 10’s most impressive feature, with an advanced command-and-control system that allows it to communicate and share information with nearby JGSDF tanks and units.

The Type 16 was introduced a few years after the Type 10. Although it is wheeled, it has a tank turret and functions as a light tank, conducting close combat, counterattacks, and direct-fire infantry support.

Armed with a 105 mm rifled gun and weighing just 26 tons, the Type 16 can operate safely on Japan’s entire road network and be carried in Air Self Defense Force aircraft. 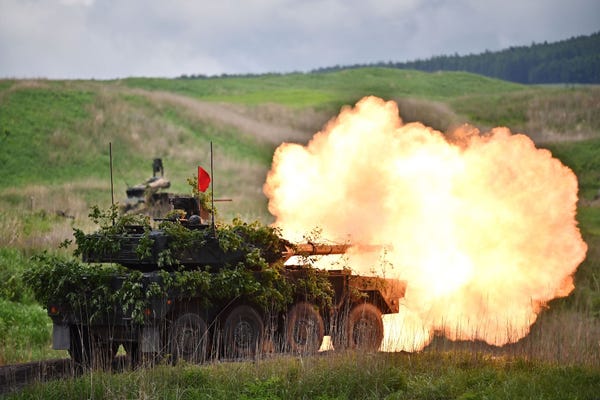 Adopting lighter tanks may seem counterintuitive, but it actually fits perfectly within the force the JSDF is building — one capable of dealing with the new threat posed to Japan’s southwest by China.

“As we got farther from the Cold War and different threats arose, Japan started to shift overall defense thinking about where the real threat is emanating from,” said Jeffrey Hornung, an expert on Japanese security and foreign policies at the RAND Corporation.

“It starts to crystallize, really in the last decade, decade and a half, [to] where it’s the China threat,” Hornung told Insider.

That threat is primarily in the air and at sea, and centers on the Senkaku Islands, which Japan administers but China claims, calling them the Diaoyu Islands.

Japanese leaders believe that since China is not trying to export global revolution like the Soviet Union and is focused on just the Senkakus, a large-scale ground invasion of its home islands is unlikely.

“They don’t anticipate China doing any sort of amphibious invasion of Japanese territory, and so in that environment they don’t see a need for the heavy artillery and tanks.” Hornung said.

“Instead, they see that you have all these islands in the southwest island chain that if the GSDF are going to be involved in, they have to rapidly get there, and they have to have the capability to fight in that environment,” Hornung added.

A need for rapid deployment 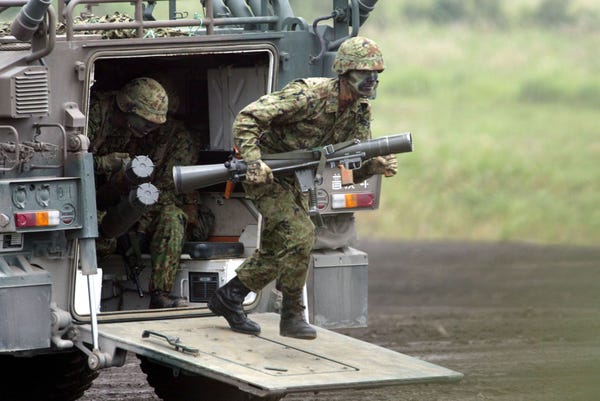 Tanks would still be essential if China were to attack Japan’s larger offshore islands, where thousands of people live. As a result, the GSDF is developing rapid-deployment divisions and brigades, including a new unit trained specifically in amphibious warfare.

But the GSDF still faces problems — namely its lack of sealift capacity.

Despite the main threat seen as facing Japan’s southwest islands, half of the GSDFs rapidly deployable basic operational units are still based in Hokkaido.

While the Type 16 can be deployed by air, the Type 90 and Type 10 would have to be transported by sea. The majority of its soldiers and hardware would also likely need to be deployed by ship, especially if they are headed to Japan’s outer islands.

The only vessels capable of such tasks that Japan’s Maritime Self-Defense Force has are its three Ōsumi-class tank landing ships. Japan plans to acquire three new transport vessels by 2024, but these are considerably smaller, and the total number of capable vessels would remain dangerously low.

“They developed these [rapid deployment] capabilities without more coordination on the airlift and sealift from the other services that’s required, and that’s where there’s a problem,” Hornung said.