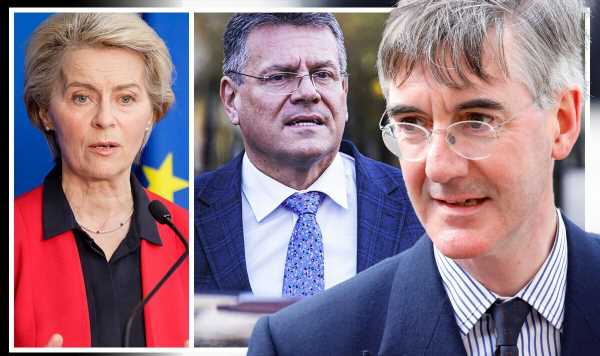 The Government has been accused of turning its back on Northern Ireland as ministers eye a breakthrough over the province’s trading arrangements. Hopes were raised this week with speculation Foreign Secretary James Cleverly and European Commission Vice-President Maroš Šefčovič are poised to trigger the final phase of negotiations to thrash out a joint agreement over the Northern Ireland Protocol.

Brussels and London have now agreed to share data on the flow of goods from Britain to the province in a move hailed by some as a new basis for resolving the long-standing impasse.

But politicians and political commentators have called the possibility of a breakthrough into questions on the eve of further talks between Mr Cleverly and Mr Šefčovič.

Former Business Secretary Jacob Rees-Mogg told Express.co.uk: “I’m not confident [of a breakthrough] because this has been going on for a long time. There have been lots of discussions with lots of foreign secretaries that haven’t led to a breakthrough. I won’t hold my breath, but I would not dismiss it out of hand.”

He added: “The Northern Ireland Protocol Bill is in the House of Lords. We need to get on with that.”

The Northern Ireland Protocol Bill would grant powers to unilaterally override parts of the protocol and safeguard UK interests.

Ex-Brexit Party MEP, Ben Habib, told Express.co.uk the “endless” UK-EU negotiations with Mr Šefčovič cannot achieve anything for Britain as the Commission Vice-President only has a mandate to “tinker at the edges” of the protocol.

Mr Habib added: “He recently said with political will the differences between the EU and the UK over the protocol could be addressed. He means the opposite. He hopes for the customary absence of political will at Westminster and a British capitulation. Šefčovič is certain to get what he wants.”

He continued: “We saw the first signs of this last week when James Cleverly bowed to the EU and agreed to allow it access to British IT systems for goods movements across the Irish Sea. In doing so, the British Foreign Secretary has granted a foreign power access to sensitive, British commercial information. This information will enable the EU and Republic of Ireland to undercut British companies.”

He claimed this would boost their trade at Britain’s expense and accelerate the capture of Northern Ireland which had been put in train by the protocol.

Mr Habib said: “It beggars’ belief that a British Foreign Secretary of State could act in a manner detrimental to British interests. What we learn from this one action is that the British Government has no intention to do anything other than cement in place the protocol and turn its back on Northern Ireland. No wonder Šefčovič left those talks grinning like a Cheshire cat.”

Mr Paisley told Express.co.uk: “There has been no serious movement or engagement. All the talk about mood music is just a distraction.

“The EU appears to have no intention of moving and recognising the disaster the protocol is for [Northern Ireland]. They are playing a long game hoping for a Labour government that will concede even more to them.

“His Majesty’s Government needs to man up and fix this mess. The protocol is damaging the economy and Northern Ireland’s status. Either root and branch change [needs to be] agreed with the EU or else the Bill in the Lords needs to be implemented.”

Meanwhile, on Thursday Irish Taoiseach Leo Varadkar said he is hopeful an agreement can be reached between the EU and the UK on the protocol which will unlock the stalemate at Stormont.

After meeting political parties in Belfast, Mr Varadkar said negotiations were “not in the proverbial tunnel yet”, but said he would like to see a deal which was acceptable to unionists.

During the visit the Foreign Secretary reflected on the agreement reached over the EU’s access to UK IT systems. This would provide live information about what goods are moving from Great Britain to Northern Ireland.

The UK Government said while a range of “critical issues” have yet to be resolved on the protocol, the recent agreement provides “a basis for further constructive discussions” with the EU to come to a negotiated solution.

Tory MP, John Baron, told Express.co.uk: “The Government is right to continue to highlight the shortcomings of the EU’s approach to the Northern Ireland Protocol and it was good to hear the Irish Prime Minister acknowledge that the Protocol is ‘too strict’.

“Even its partial application is adversely affecting the economic relationships between Northern Ireland and the rest of the UK, yet it has not resulted in damage to the EU’s Single Market which was its concern. With every passing day the EU’s position that only the full application of the Protocol can protect the Single Market is being shown up as hollow.

“There is clearly scope for a deal to be done, not least because it is in everyone’s interest to do so. The war in Ukraine underlines the importance of good relations between Western democracies. However, in its eagerness to do a deal the Government must not cut corners. The UK’s position is a strong and, above all, reasonable one – and Britain’s decision to leave the EU must be respected and upheld.”