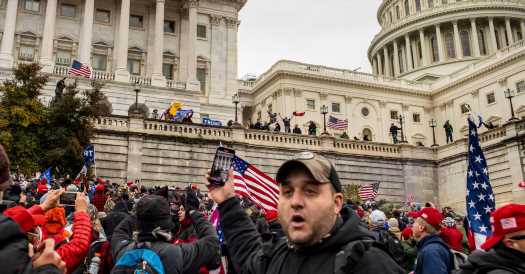 Republicans have so far shown neither a will nor a way to knock Donald Trump out of his position as the de facto leader of the party. And for the time being, that means they’re stuck blocking for him.

Just weeks ago, it looked as if a solid chunk of Republican legislators might be willing to support a commission to investigate the Capitol riot of Jan. 6.

Some establishment G.O.P. strategists and former lawmakers have said they see this as an opportunity to make a clean break with Trump (though, admittedly, we’ve heard that one before) by giving a full account of the role that he and his allies played in the events around the violence at the Capitol.

But just as the bill cleared the Democratically controlled House yesterday, with support from a small but significant minority of Republicans, the party’s leadership fell into step in opposition.

All of a sudden, it appears unlikely to pass the Senate, where it would need 60 votes to override the threat of a filibuster. It’s the latest sign, and possibly the clearest yet, that Trump retains an iron grip on the party’s direction. And that Senator Mitch McConnell’s old obstructionist approach — which he refined into an art form during the Obama presidency — may be the surest way to maintain it.

Republican lawmakers who fled for their lives as rioters stormed through the halls of Congress, including some who a few weeks ago argued that Trump must answer for his role in provoking the attack, are now against an investigation into it.

Just before the House’s vote yesterday, McConnell, the Republican leader, came out against the commission, painting it as a partisan maneuver just days after saying that he was open to starting one.

“I’ve made the decision to oppose the House Democrats’ slanted and unbalanced proposal for another commission to study the events of Jan. 6,” he said on the Senate floor, complaining that the deal reached in the House did not include an inquiry into left-wing violence.

It was a far cry from the harsh words McConnell dished out immediately after the Capitol attack, but this isn’t the first time the minority leader has swept in at the 11th hour to stop an action that could potentially lay bare Trump’s role in provoking the Jan. 6 uprising. In February, he waited until just before a vote on Trump’s second impeachment to state that he would oppose it, effectively ensuring the former president’s acquittal on charges stemming from Jan. 6.

In March, a Monmouth University poll found that a solid majority of Americans thought an independent commission should be set up to investigate the attacks, with just 37 percent preferring to let other “internal investigations” take care of things. Roughly half of Republicans favored a full independent inquiry.

But in the weeks since, Republican lawmakers and conservative pundits have coalesced as Trump has only tightened his grip on the party ahead of the 2022 midterms. A range of other polling shows that while Trump’s favorability ratings have slipped further among the country at large, he has retained widespread support from the Republican rank-and-file.

This month, House Republicans voted to remove Representative Liz Cheney from her post as conference chair because she had refused to stop criticizing Trump’s false claims about the 2020 election. (Yesterday, she was one of the 35 House Republicans who voted in favor of the commission.) The party’s leadership is now firmly behind Trump’s distortions.

Commentators at the conservative fringe were already downplaying the Jan. 6 insurrection before the blood at the Capitol was dry, sometimes floating conspiracy theories to justify it. More recently, top Republicans have begun to draw more heavily on that narrative.

“The fact of the matter is even calling it insurrection, it wasn’t,” Senator Ron Johnson of Wisconsin, a staunch Trump ally, said on Fox News yesterday.

“By and large, it was peaceful protests, except for there were a number of people, basically agitators, that whipped the crowd and breached the Capitol.”

Senator Chuck Schumer, the Democratic leader, denounced Johnson’s comments today on the Senate floor. “If there was ever a justification for creating a bipartisan commission to study and report on the truth behind the attack of Jan. 6, the comments of that senator provide it,” Schumer said. “Republicans in both chambers are trying to rewrite history in fealty to — or in fear of — the former president, Donald Trump.”

As envisioned, the inquiry would be modeled largely on the 9/11 Commission, which was approved with broad bipartisan support in 2002. Its work was roundly heralded upon its completion in 2004, and its leaders have endorsed the idea of a similar commission to investigate Jan. 6. This new inquiry would include 10 commissioners, appointed by both Democratic and Republican congressional leaders, and would be empowered to issue subpoenas. It would deliver findings by Dec. 31.

But, knowing that the party’s base remains committed to Trump, Republicans are aiming to portray the commission as partisan. In fact, this could become a self-fulfilling lament.

If the bipartisan commission fails to pass the Senate, Democratic committee leaders in both houses of Congress would still be able to investigate the events of Jan. 6.

And Democrats in the House are already threatening to take a no-holds-barred approach, through existing committees or by creating new select committees. Of course, such a strategy would play more neatly into Republicans’ argument that Democrats are pursuing a partisan investigation.

On Politics is also available as a newsletter. Sign up here to get it delivered to your inbox.

Is there anything you think we’re missing? Anything you want to see more of? We’d love to hear from you. Email us at [email protected].

21/05/2021 Politics Comments Off on How Hopes for a Bipartisan Jan. 6 Commission Fell Apart
Markets