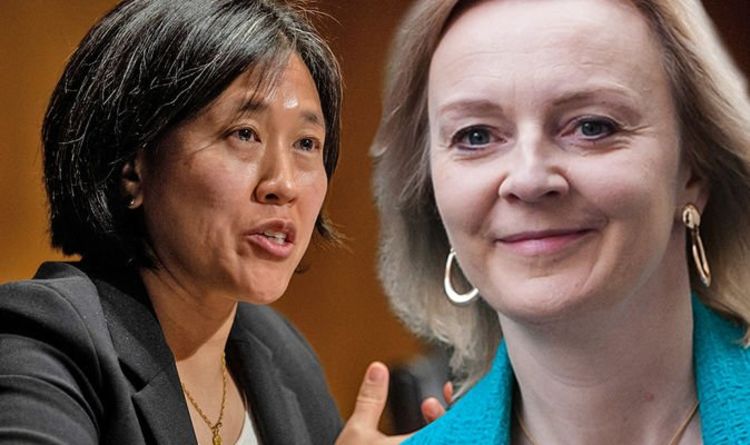 During her five-day trip, International Trade Secretary Ms Truss will meet Ms Tai to discuss closer cooperation on tackling threats to free and fair global trade. Specifically, she will focus on what can be done to combat market-distorting trade practices such as industrial subsidies and dumping, as well as working together to defend workers and companies which play by the rules against unfair trading practices.

Speaking prior to her meeting, Ms Truss said: “I’m visiting the US to build on the progress we’ve already made on tackling market-distorting practices that threaten the future progress and prosperity we can make around the world through free and fair trade.

“Workers in both the UK and US have suffered when their products are unfairly undercut. We must work together with our friends and allies in the US to protect free enterprise from practices like industrial subsidies and intellectual property theft, which give trade a bad name.

“With UK US trade supporting over a million jobs in both countries, there is clear reason to work together to deepen our trade and investment ties and build back better. Together we can build on our credentials as two great innovating nations, and take this opportunity to shape the future of digital trade.”

After her discussions with Ms Tai, Ms Truss will then travel to the West Coast, home to some of the world’s biggest tech companies, in order to promote the UK as a leading investment destination prior to October’s Global Investment Summit.

She will also meet businesses and investors to discuss opportunities for growth on both sides of the Atlantic, and speak with leading Democrats and the tech industry about how a future UK-US free trade agreement can set “gold-standard rules” on digital trade.

Digital trade contributed roughly £151billon to the UK’s economy in 2019.

The UK tech sector attracted some £7.3bn of foreign investment in 2020.

The US is the UK’s largest single trading partner, with total trade reaching more than £196bn in 2020, supporting over one million jobs in one another’s economies.

Both countries have more than £720billion invested in each other’s economies.

The UK and the US started talks on a post-Brexit bilateral free trade deal while former President Donald Trump was in office.

However, no accord could be reached before Joe Biden entered the White House in January, having defeated Mr Trump in November’s Presidential election.

And Ms Truss’s visit comes in the wake of the recent resolution of the Airbus-Boeing dispute, ensuring harmful tariffs are suspended, raising hopes about future cooperation.

A statement by Ms Tai on June 21 said: “Reaching an agreement with the United Kingdom to finally put the large civil aircraft disputes behind us is a great step forward for our special relationship.

“I want to thank Secretary Truss for her partnership while we worked to get this deal across the finish line.

“It is a model we can build on to ensure fair competition and address common challenges from China and other non-market economies.”

She added: “Our success this week shows that democracies can deliver results and come together to shape trade policies that lift up workers, people and communities that are often overlooked.

“This worker-centric approach will guide our efforts to address other US–UK trade issues, and I look forward to working closely with Minister Truss in the months ahead.”

11/07/2021 Politics Comments Off on Here we go again! Liz Truss heads to US for landmark trade deal talks worth £120bn
Markets