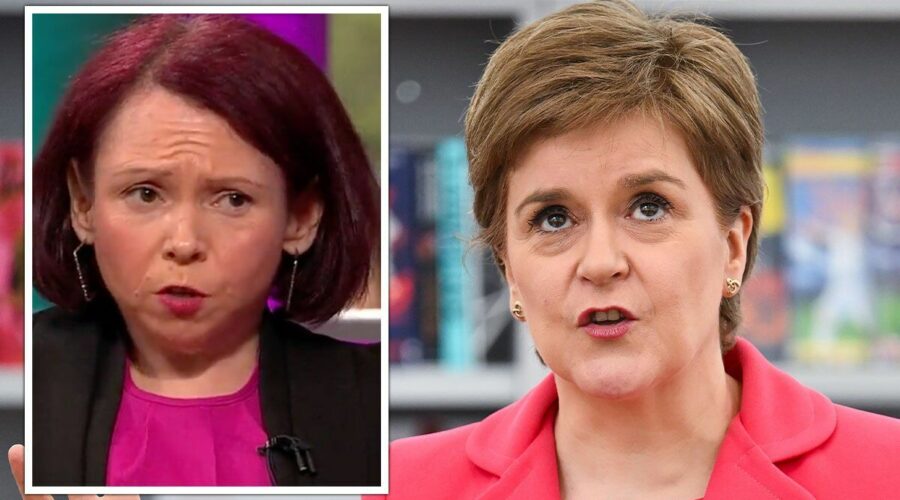 As Nicola Sturgeon is about to kickstart a fresh campaign for a second independence referendum, the First Minister has come under fire for side-lining more pressing issues like the cost-of-living crisis and the NHS crisis. Despite the opposition’s calls to put Indyref2 aside, Ms Sturgeon is moving forward and exploring the options Scotland has to unilaterally hold a new referendum without Westminster’s consent.

To Scottish Labour MSP Pam Duncan-Glancy, this is only a distraction from the problems the Scottish people are grappling with.

Speaking to The Nine, Ms Duncan-Glancy slammed: “They have a mandate for a lot of things but they’re not doing any.

“They have a mandate, absolutely, to end the wintertime crisis in the NHS, to get more people into employment in the NHS, to pay public sector workers properly and to end poverty. They’ve got a mandate for all of these things.

“But the SNP, as they always do, is only choosing only to focus on the one mandate that they care about. And that’s independence. And they don’t pay attention to the rest.”

BBC Scot Nine’s TV host Nick Sheridan then said: “But it is a mandate, isn’t it?”

“They got elected in May last year”, Ms Duncan-Glancy hit back, “and they are only just the majority if they got the Greens with them. And so, the Greens, of course, have been propelling up their government for some considerable amount of time.”

Mr Sheridan interjected: “So, they do have a mandate.”

Ms Duncan-Glancy retorted: “The referendum wasn’t on the ballot, and you know that. The election last year was about much, much more than a referendum. It was about what they want to happen in Scotland.

“And people elected in government to make sure that the NHS functions, their children are not living in poverty, that there are enough jobs, that wages aren’t declining in real terms, and that we’ve got enough money to get through his economy. That’s what they want the government of the day to do. That’s what they should be focused on.”

The SNP has been accused of providing “wasteful management” to the NHS, as the health industry is facing extreme shortages in nurses, according to the Royal College of Nursing and Royal College of Radiology. Scottish Conservatives warned the NHS is reaching a “crisis point.”

Referring to Nicola Sturgeon’s independence bid, Mr Sheridan said: “We’re always told around elections that the only poll that matters is the one around the ballot box.

“If we look at the decision most recently made by the Scottish electorate at the ballot box, it was a pretty resounding victory for the SNP and not so for Labour. Wouldn’t that suggest that the democratic thing to do would just at least to let this second independence referendum happen?”

Ms Duncan-Glancy said: “The democratic thing to do would be to govern for the people of Scotland.

“People elected the government of the day to govern and to change things for the people here and now, not promise things for tomorrow.”

Ms Sturgeon has insisted she wants any referendum to be officially recognised to create “a new Scotland that is wealthier, fairer and more resilient.”

The First Minister is to publish the first in a series of papers making the case for Scottish independence at a press conference on Tuesday in Edinburgh.

Ahead of the report’s publication, she said: “Having the full powers of independence does not guarantee a better future – that will depend on the abilities of the people who live here and the quality of the decisions they make – but it is striking just how successful neighbouring countries of Scotland are, compared with the UK.”