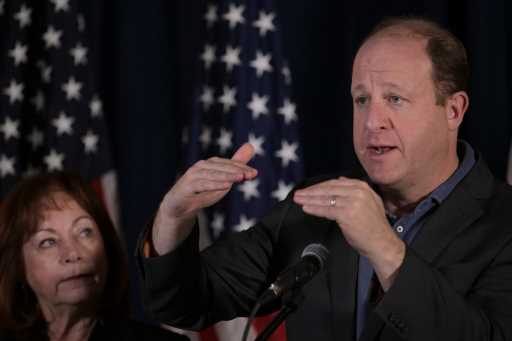 Polis, a Democrat who sailed to re-election in November, updated his budget proposal to reflect the most recent December economic forecast. His updated proposal trimmed the overall budget request from $42.7 billion to $42.6 billion, while leaving the general fund relatively untouched at about $16.7 billion, according to the governor’s letter to lawmakers.

But he did update some of his requests. In addition to the property tax relief, Polis also wanted to direct more money to job training, earmark some to leverage federal dollars and push the state toward his goal of 100% renewable energy by 2040 through clean energy tax credits and expanded rebates for electric vehicles, e-bikes and electric mowers and leaf blowers.

The legislature will ultimately draft and pass a budget to send to Polis this spring. There will still be another economic forecast that will underpin the final budget proposal in March, meaning this is a “starting point” for budget writing, Polis said. But, there’s also “a lot of alignment” on how he ran for re-election and Democrats who expanded their majorities in both legislative chambers.

“(The budget is) an opportunity to really highlight our values, the mandate that I have on behalf of the people of Colorado, and our plans for the second term,” Polis said.

Proposal to keep homeowners from being “priced out” through spiking taxes

“The danger is, if we don’t provide additional property tax relief, Coloradans could be priced out of where they live just because of increased property values,” Polis said, noting that few Coloradans saw their income increase on pace with property valuations.

Polis also asked for $15 million as a “placeholder that’s simply for implementing forward-looking, smart-planning usage.” He has advocated for more housing along transit corridors, specifically.

That is separate from the hundreds of millions of dollars expected to be raised through the voter-approved Proposition 123 for various housing-related measures. Polis promised to be a steward in implementing the will of the voters on that proposition — not letting it be a “slush fund for the legislature to spend on anything housing related.”

Fixing “a good problem to have”

Polis also proposed $70 million to help pay for job training and close the ongoing gap between the number of job openings in the state and the number of unemployed Coloradans. In particular, he wants to make it free to get certifications in fields such as education, law enforcement, fire and forestry, construction, advanced manufacturing, and nursing.

He also proposed $10.5 million to aid employer-based childcare to encourage more parents to enter the workforce. And in thinking of children — and future workforce needs — he also proposed $25 million over two years to expand afterschool programs, with a particular emphasis on science, technology, engineering and math, or STEM, programs.

Polis hopes to earmark money specifically to tap into federal money and programs. His budget includes $55 million that he hopes federal funds would transform into $300 million for the state water plan and clean water investments. That federal money would come from a combination of the Bipartisan Infrastructure Act and Inflation Reducation Act that passed Congress in recent years.

“Really, it’s a historic opportunity we want to maximize,” Polis said. “One of the values we bring to this budget is to maximize and pull down federal dollars with our limited resources.”

Similarly, he cited the federal CHIPS Act, which was aimed at promoting domestic microchip manufacturing. That includes $5 million in direct investment and $15 million in tax credits to attract those businesses.

“Many other states are looking at what they can do to make sure their state succeeds,” Polis said. “We want to do that for Colorado.”