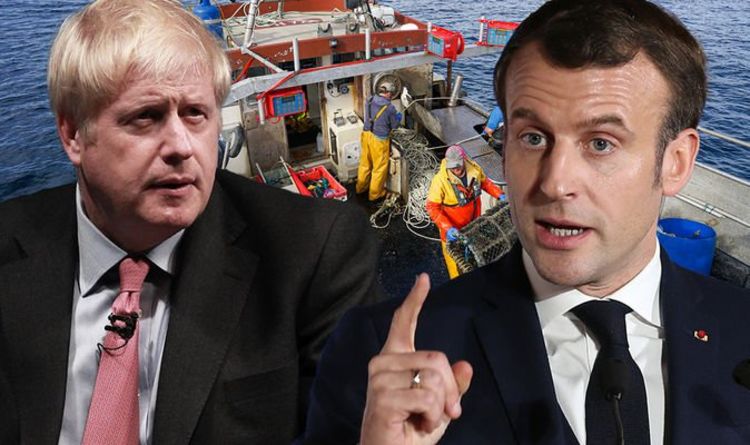 France and Britain are in the midst of a bitter dispute over post-Brexit fishing rights. French Prime Minister Jean Castex has accused the UK of not respecting its Brexit deal commitments on fishing. Paris is angry after the UK granted just 12 licences out of 47 bids – and has threatened to take two courses of action against the country in a bid to get its way.

The French European Affairs Minister Clement Beaune warned the EU would be forced to retaliate if more fishing boats were not granted access to UK waters or if the UK Government triggered Article 16 of the Northern Ireland Protocol.

He said France “will not stand for this” adding the EU is gearing up to retaliate if remedial measures are not taken.

Mr Beaune told Europe One radio: “Enough already, we have an agreement negotiated by France, by Michel Barnier, and it should be applied 100 percent. It isn’t being.

“In the next few days – and I talked to my European counterparts on this subject yesterday – we will take measures at the European level or nationally, to apply pressure on the United Kingdom.”

He added: “We defend our interests. We do it nicely, and diplomatically, but when that doesn’t work, we take measures.”

Mr Beaune made two particular threats against the UK.

The possible actions Paris threatened to target UK exports in France, including: switching Britain’s power off, and turning the UK’s data off.

He said: “The UK. depends on our energy exports, they think they can live alone while also beating up on Europe and, given that it doesn’t work, they engage in aggressive one-upmanship.”

Mr Beaune yesterday said the UK is dependent on the European energy supply.

He said: “You could imagine the Channel Islands, where the United Kingdom depends on us for its energy supply.”

Britain is already struggling with fuel and gas shortages amid the skyrocketing wholesale gas prices and lower than anticipated supply of power from wind farms due to low wind speeds.

Several UK Ministers have told British media this particular action would be considered a “hostile” act and would significantly and permanently affect London-Paris relations.

Diplomats from several EU countries have floated the option more subtle measures than turning off power could be effective.

This measure would not impact the general population but would have a significant effect on the business community in the UK.

These challenges, including handling siloed data and keeping hold of skilled workers, are also being felt in Germany (40 percent) and France (39 percent).

These regulatory issues could worsen if the EU and UK are not aligned on data strategy in future – or if France takes action to turn off Britain’s data network.

In response to the threats, Lord Frost accused Paris of poor behaviour and claimed it was another example of the EU resorting to empty and needless threats.

He told the Telegraph: “For all the frustrations of the last 18 months, I can’t think that we as a country have resorted to those sorts of threats.

“We’ve not made those sort of direct threats to our neighbours, and the vaccine export ban earlier this year is another example of where the EU resorts to these sorts of threats quite quickly – and that’s not how we should behave.

“We don’t, and I don’t see why our neighbours feel they have to.”

French fishermen who claim to be deceived by Britain, after just 12 out 47 licence applications were successful in Jersey, have called on the European Commission to take “retaliatory measures”.

The president of the fishing committee for the northern Hauts-de-France region, Olivier Lepretre, threatened to blockade the port of Calais and cut off Christmas supplies.

Overall, 31 out of a possible 70 eligible vessels have been granted permission to operate in British waters according to the committee.

Mr Lepretre said: “As far as French fishermen in northern France are concerned, in the absence of any results, the blocking of the port of Calais and exports to the United Kingdom for the period leading up to Christmas is an option.”