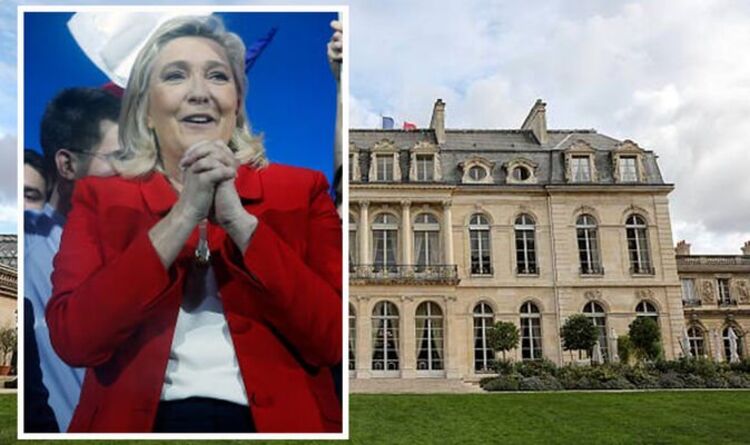 Marine Le Pen: Macron's France is a France that stops

Marine Le Pen secured her spot in the all-important second-round run-off by finishing as the next most popular candidate after incumbent President Emmanuel Macron in the first stage of voting. As a result, the National Rally candidate will get a chance to avenge her loss during the 2017 presidential election, with most pollsters predicting a far closer contest second time round.

In the build-up to 2022’s election, Ms Le Pen has continued to campaign on her party’s traditional line of curbing immigration and ‘keeping France for the French’.

She became party leader in 2011 when it was then known as the National Front and defined by its extreme anti-Islam positions.

The 53-year-old took over from her father Jean-Marie Le Pen and eventually re-branded the group as the National Rally.

Joel Reland, a researcher for the think-tank UK in a Changing Europe, told Express.co.uk how this decision allowed Ms Le Pen to “soften” the party’s image and “present herself as a more moderate politician”.

He said: “She changed the party’s name, has sought to promote a friendlier personal brand, and where once she advocated France leaving the EU [European Union] she now speaks of greater French sovereignty within the EU.”

On Sunday, April 24 Ms Le Pen will look to topple the reign of Emmanuel Macron and prevent him from securing a second term as French President.

Many pollsters, including Politico, have the pair split by just a handful of percentage points, though Mr Macron is still the favourite to win.

Mr Reland explained that Ms Le Pen had been able to close the gap to her rival as a result of the French public becoming disillusioned with the incumbent President.

He said: “In 2017 he [Macron] was a new candidate and many voters who wanted to keep Le Pen out of power were willing to lend him their vote.

“But his five years in power has been characterised by ‘yellow vest’ protests in response to rising fuel prices, exacerbated by the recent economic shock of the war in Ukraine, and many on the left feel betrayed by economic policies such as tax cuts and increasing the pension age.”

If Ms Le Pen were to stage somewhat of a surprise and win, the researcher said he would be interested to see whether she “sticks to her guns” and pursues an EU of “free and sovereign states”.

He added that he “would not be surprised” if she backtracks on some of her “more extreme rhetoric” due to the length of Brexit negotiations between the bloc and Britain.

Mr Reland would also expect Ms Le Pen to deliver on her promises to improve the French economy.

For example, she has previously said she would look to lower VAT on energy from 20 to 5.5 percent.

On the continent, Mr Reland believes a Le Pen victory would be felt most by the absence of Mr Macron as the EU would lose one of its “most influential” leaders for developing a long-term strategy to deal with the military and economic fallout from the war in Ukraine.

He added: “EU leaders know they know they will have a much less constructive partner in Le Pen.”

In recent months some analysts have suggested a win for Ms Le Pen could spark a populace movement in other EU states.

However, Mr Reland doesn’t agree with the stance, arguing the “unique” context of the French election means whatever the outcome may be it cannot be used to predict what could happen in future elections.

He said: “There were four leading candidates who are all personal brands more than they are representatives of political traditions.

“If Le Pen wins it will be because enough French people are sick of Macron to stay at home or decide they will be no worse off under her.”

“She is not riding a mass wave of popular support and so it will be very hard to transfer that energy to other countries.”

15/04/2022 Politics Comments Off on France election: What could a Marine Le Pen presidency look like? Expert opinion
Markets