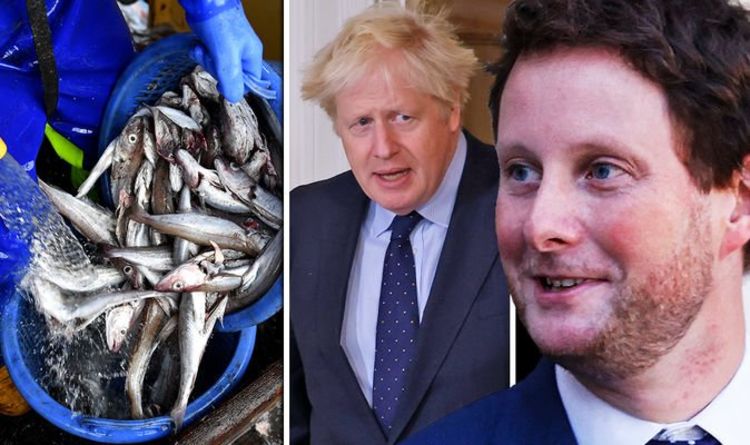 The French Secretary of State for European Affairs made his incendiary comments come at a time of rising tension over access British waters by French boats. And speaking at a conference in Nice, he made it clear he was in no mood to compromise, suggesting the EU27 would present a “united front” on the issue.

Paris is furious at London’s rejection of all but 12 out of 47 French applications for new licences for small EU boats to fish in UK waters.

There have even been suggestions London is trying to blackmail Paris over the cross-Channel migrant crisis.

French Maritime Minister Annick Girardin has threatened a range of retaliatory measures, including pushing for tariffs to exclude Britain from the bloc’s lucrative energy market, and restrictions on UK students wanting to study on the Continent.

Questioned on the issue, Mr Beaune crowed: “During the Brexit crisis, predictions were wrong.

“The British thought that we were going to divide, but we have stood together.

“What matters now is the solidarity of action.

JUST IN: Brexit LIVE – Back off Macron! Brexiteer sounds warning to France

“We have to show the British that we are ready to take action if they do not implement the agreement they have signed.”

An EU official confirmed: “I hear there are – as you would expect – contacts between Paris and the Commission.”

France does not accept the UK’s suggestion that the licence applications were rejected because the boats were unable to prove historic fishing activity in British waters, a condition contains within the Brexit fishing agreement signed by Boris Johnson last December.

A French official said: “We do not agree with this interpretation of the Brexit agreement. They are asking for proof that was not part of the deal.”

Speaking yesterday, Ms Girardin said “a calendar of actions” would be presented “with a European action, a national action, obviously aimed at the British and also at our Jersey neighbours.

“I am counting on other European countries to demand the same thing as France because what France is experiencing today, others will experience as well.”

Ms Girardin suggests other retaliatory options including targeting British fish exports to the EU, and imposing restrictions on students hoping to study in EU countries.

The deal signed by Brussels and London on Christmas Eve includes enforcement measures which can be triggered if Britain refuses access to its waters.

They include hitting UK fish exports with trade tariffs after the Commission initiates arbitration processes contained in the fishing agreement.

If such an approach does not succeed, the Commission could opt to deploy cross-sectoral measures which could ultimately mean Britain being shut out of the EU’s energy market.

The transition deal has about five years to run before annual negotiations are held on fishing opportunities.