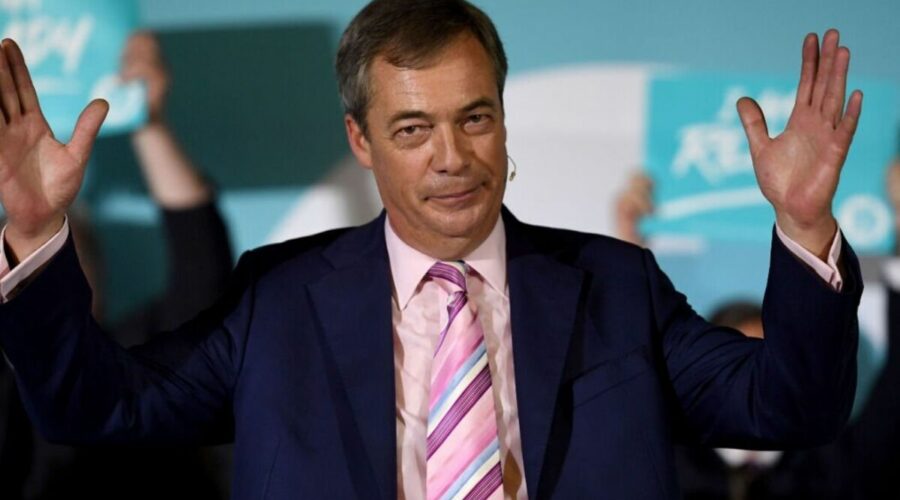 Nigel Farage issued Liz Truss with a fresh electoral warning yesterday just days after hinting he would consider a political comeback if the UK’s voting system changed. The 58-year-old GB News presenter made the warning after the Prime Minister sacked Kwasi Kwarteng as Chancellor.

Mr Kwarteng, who campaigned for the UK to leave the European Union in 2016, was replaced by the Remain-supporting former Foreign Secretary Jeremy Hunt.

“This Conservative Party has no authority, no decency and has failed our country.

“Remainer Jeremy Hunt is the new Chancellor, joining forces with our Remainer PM.

JUST IN: ‘Time to resign!’ Tory MPs tell Truss the game’s up after disastrous sacking of Kwasi

“This Conservative Party has no authority, no decency and has failed our country.”

He added: “A new proportional voting system will kill Conservatives off, and after 12 years of Tory misrule — they deserve it.”

However, the ex-UKIP leader’s comments came after he told an audience at the Bitcoin Conference in Amsterdam that he would consider a return to frontline politics.

Mr Farage, who served as an MEP for 21 years but failed to get elected to the House of Commons on seven occasions, said: “I think in the UK’s, the electoral system, the first pass the post, constituency by constituency – what’s it given us?

“Twelve years of utterly useless Tory government. And I think the whole thing needs a shake-up.

“I suspect we will get a Labour Government under Starmer.

“There’ll be a fair contingent of the Liberal Democrats in there as well.

“And I think we will then get a form of proportional representation. And as soon as we get that, we’ll see a very different kind of politics.”

Speaking in the Dutch capital, the ex-UKIP leader added: “I won the 2014 and the 2019 European elections – the second one by a landslide.

“I won two national elections that were contested under PR but on the first pass the post – four million votes, only one seat.

“And I think when we get proportional representation, we’ll see people back in politics with real convictions.

“Who knows, I might even give it another go myself.”

Mr Farage came closest to entering the Commons in 2015 when he received 16,026 votes in South Thanet, just 2,812 votes behind Conservative candidate and ex-UKIP Treasurer Craig Mackinlay.