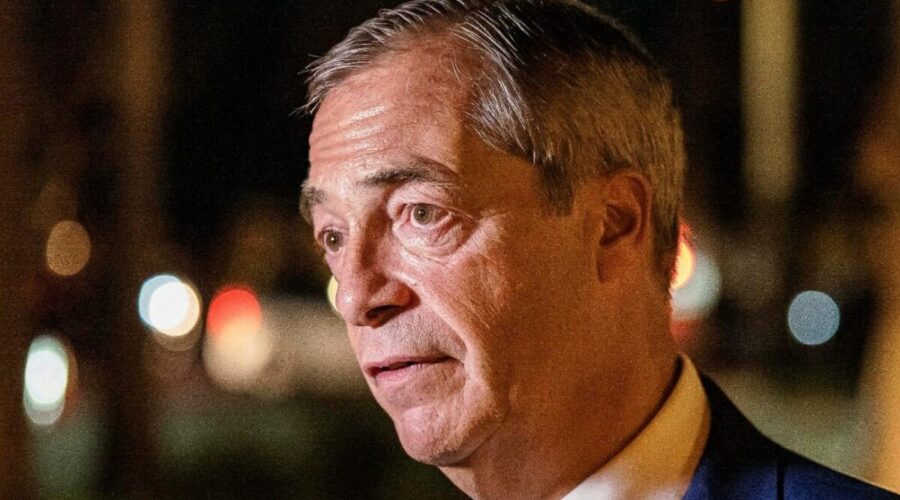 Nigel Farage could become the “ultimate headache” for Rishi Sunak’s Tories if he returns to frontline politics and leads a ‘UKIP-style’ populist party, ex-Brexit Party insiders have warned. Mr Farage exited the political stage for the third time after the United Kingdom left the European Union as he handed Reform UK to Richard Tice and took the post of honorary president. However, the ex-UKIP leader has hinted at a potential return since joining GB News as an evening presenter.

Speaking to viewers in Boris Johnson’s Uxbridge & South Ruislip constituency last month, Mr Farage said: “If it was proportional representation, I’d do it without hesitation.

“As it is, it needs a lot of thought but I haven’t given up.”

It has been suggested that a Farage-led party focused on the cost of living, taxes, immigration and Brexit could make considerable ground with Leave-supporting voters.

The ongoing Channel crossing crisis appears to have particularly frustrated Conservative voters in recent weeks, with almost 40,000 migrants making the perilous 21-mile journey so far in 2022.

The Conservatives continue to trail Labour in the opinion polls, with Deltapoll giving Sir Keir Starmer’s party an 18 percent lead.

Several former allies in both UKIP and the Brexit Party have claimed Mr Farage could pose a problem to Mr Sunak and the Prime Minister’s Conservative colleagues if he decided to make a political comeback.

Ex-Brexit Party MEP Alex Phillips told Express.co.uk: “We now live in an era of personality politics and when it comes to the biggest personality in UK politics that person, without doubt, is Nigel Farage.

“Given Boris Johnson is no longer leader of the Conservative Party, if Nigel did decide to re-enter the frame, I am sure he would actually give a party like Reform UK a lot of momentum.”

Ms Phillips, who also worked for Mr Farage at UKIP and has been in conversation with him about his political ambitions, added: “The way the Conservatives are poling right now, they will be extremely worried about haemorrhaging votes as it is very clear the Tory Party is not as popular with their grassroots and they are losing shed loads in the Red Wall.

JUST IN: Brexit bonfire of EU laws set to go ahead with no delay as PM confirms date for axing

“Nigel Farage would be the only person, at this point, who would be the ultimate headache for the Conservatives as their arch-nemesis when they’re haemorrhaging support.

“If Nigel were to add his weight to the cause then he would be very dangerous, perhaps actually far more dangerous to the Labour Party right now.”

When asked about the likelihood of Mr Farage making a political return, Ms Phillips suggested her former boss would need to guarantee electoral success rather than merely “clamouring in the wings”.

Ms Phillips added that Mr Farage could make a return due to the ongoing political turbulence and indicated that he would be ready to “go at any time” if he decided to make a comeback.

Commenting on the UK’s “bleak position”, another ex-Brexit Party insider said: “The same consensus Nigel took on first with UKIP, and then with the Brexit Party, has reasserted itself. If the country is to have any hope of avoiding the downward spiral of high immigration, high taxes, and declinism then it’s essential Nigel fights the next election.”

Lance Forman, a former Brexit Party MEP who defected to the Conservative Party ahead of the 2019 General Election, also suggested a populist party could cut through with both Labour and Tory voters if it prioritised reaping the benefits of Brexit and a review of the Government’s net zero strategy.

Speaking about the “marmite” figure of Mr Farage, Mr Forman told Express.co.uk: “Nigel returning to mainstream politics would certainly make both the Tories and Labour sit up.”

He added: “A new party could cut through. Would it need Nigel? Maybe.

“If there was someone else with Nigel’s charisma and eloquence, they could potentially do well too, but few have his name and face recognition that has been built up over decades.”

Despite failing to enter the Commons, Mr Farage led UKIP and the Brexit Party to victories in the 2014 and 2019 EU Parliament Elections.

However, since taking a backward step, Mr Farage’s populist successors appear to have failed to emulate his relative success.

Reform UK has also struggled to connect with voters since its rebrand in 2021 as Mr Tice has been the only candidate to retain the party’s deposit when he finished third in the Old Bexley & Sidcup by-election last year.

Despite speculation about a return, a former Farage ally suggested the ex-Brexit Party leader might prefer his gig at GB News.

The ex-UKIP MEP told Express.co.uk: “Farage is a much better leader than Tice who is pretty anonymous.

“Farage would be more effective but is he better off now as a media star? Nigel has done very well on GB News. No one is paying him to be in politics now – last time he was an MEP.”

Craig Mackinlay, who defeated Mr Farage by just 2,812 votes as the Conservative candidate in Thanet South in 2015 and once served as UKIP’s Treasurer, has been a prominent Tory MP warning about a potential ‘UKIP-style’ party.

However, many Conservative MPs have consistently warned that a populist party could inadvertently let Starmer’s Labour Party into Downing Street.

A Brexit-backing Tory MP told Express.co.uk: “There’s always a risk that a Farage-esque party could win five or six percent of the vote, enough to let the socialists win overall.

“In essence, entirely self-defeating by enabling a Government no one on the right-of-centre would want to see.”

Responding to questions about a revolt on the right, a Reform UK spokesman said: “We have already seen in the past few weeks a distinct uptick for Reform from all polling companies, now constantly surpassing the Greens and topping the Liberal Democrats in the key Red Wall electoral battlefield.

“As the polls rise, the media will be duty-bound to cover our perspective, the only party to consistently call for effective and stringent measures to deal with illegal cross-Channel immigration … Britain needs a party that means business, and Reform supports British business over tax and regulation.”

The spokesman added: “Nigel Farage is the honorary president of Reform, and he is in near-daily contact with Richard Tice, the Reform leader. It is a huge advantage to have such experience and wisdom available to our leadership team.”