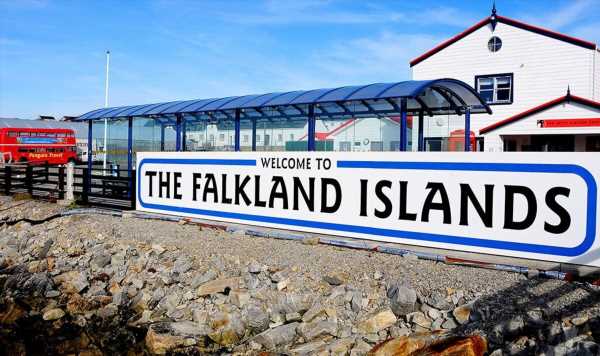 Falkland Islanders today warned Argentina any attempt to press its sovereignty claim over the remote archipelago is futile, despite the UK Government today opening talks with Mauritius over the future of the Chagos Islands. Foreign Secretary James Cleverly today confirmed Britain has agreed to begin negotiations over the future of the islands, officially known as the British Indian Ocean Territory, backing down on its long-standing resistance to doing in the face of international pressure.

However, the Falkland Islands’ Legislative Assembly swiftly issued a statement in which it emphasised the decision would have no bearing on the status of the islands referred to Buenos Aires as the Malvinas.

It explained: “The decision made over the BIOT/Chagos Archipelago, while relating to sovereignty, cannot be compared to the Falkland Islands.

“Falkland Islanders clearly stated their desire to remain a part of the UK overseas family in the 2013 referendum, when 99.8 percent voted for the Islands to remain a self-governing UK Overseas Territory.

“We remain a diverse, resilient and peaceful community that has prospered over time, thanks to the pioneering efforts of the people who travelled here from across the globe, with some families being able to trace their heritage back nine generations.”

They continued: “We are not an isolated enclave at the tip of South America, but a strong, self-determined democracy.

“The Argentine Government will likely attempt to use this decision as an opportunity to support its colonial aspirations towards our home.

JUST IN: Putin’s underwater drones could cause ‘massive disruption’ to UK

“However, no one can rewrite or overwrite the evidence of history or the human rights of the Falkland Islanders.”

Argentina’s invasion in 1982, which resulted in the deaths of almost 1,000 people, had not been forgotten, the statement stressed.

It added: “We have ensured that in 40th year since our liberation we have celebrated how far we have come as an Island nation while being a part of the UK overseas family.

“The UK government continually respect the people of the Falkland Islands right to self-determination.

Britain and Mauritius have agreed that any outcome will ensure the effective operation of the joint US-UK military base on Diego Garcia, he emphasised.

Mr Cleverly continued: “The UK and Mauritius have agreed to engage in constructive negotiations, with a view to arriving at an agreement by early next year.”

Chagossians have spent decades fighting to return to the islands after more than 1,000 people were forced to leave in the 1960s and 1970s to make way for the military base.

The United Nations’ highest court, the International Court of Justice, in The Hague, has ruled that the UK’s administration of the territory is “unlawful” and must end.

Mauritius, which won independence from the UK in 1968, maintains the islands are its own and Chagossians have fought for their return in the British courts.

Mr Cleverly said the UK has agreed for negotiations “on the exercise of sovereignty” of the islands.

The progress follows talks between Liz Truss, during her short window as Prime Minister, and Mauritian leader Pravind Jugnauth at the United Nations General Assembly in New York in September.

Mr Cleverly added: “Through negotiations, taking into account relevant legal proceedings, it is our intention to secure an agreement on the basis of international law to resolve all outstanding issues, including those relating to the former inhabitants of the Chagos Archipelago.”