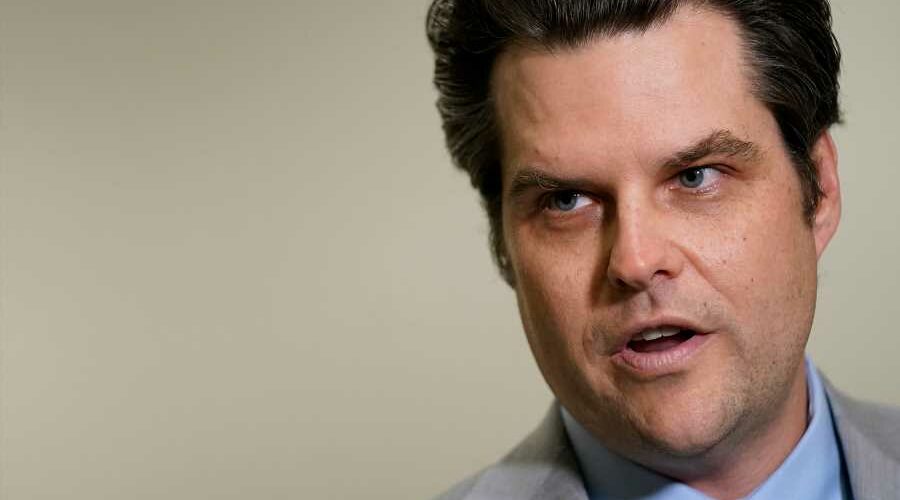 Remember when Matt Gaetz was reportedly considering leaving Congress to join Newsmax, the pro-Trump propaganda network that helped push the election lie that inspired the insurrection? You might not, because the very same day news of Gaetz’s potential pivot to media broke, The New York Times reported that he was under federal investigation for sex trafficking a 17-year-old girl.

It turned out that the sex trafficking investigation was a pretty big deal, so much so that it seems to have sunk Gaetz’s chances of joining Newsmax — if he ever had a chance to work there at all. Reuters reported on Tuesday that the network has no interest in Gaetz, nor did it express any interest in hiring him prior to the sex trafficking investigation going public. “Newsmax has had no plans to hire Rep. Gaetz,” said Brian Peterson, a spokesperson for the network.

A source told Reuters that though Gaetz approached Newsmax about a potential job earlier this year, it was “just a conversation” and Newsmax “never told him [they] were interested in hiring him.” Spokespeople for Gaetz had no immediate comment on any rejection from Newsmax, according to Reueters.

Gaetz might not be working anywhere depending on what happens with the sex trafficking investigation. Joel Greenberg, his running buddy in Florida who has already been charged with sex trafficking and a smorgasbord of other crimes, pleaded guilty to several of those crimes (including sex trafficking) last month. As part of the plea, Greenberg agreed to cooperate with federal investigators, which is pretty bad news for Gaetz considering how much has been unearthed connecting the congressman to the alleged crimes of his friend.

The most damning piece of evidence may be a letter Greenberg wrote to former Trump adviser Roger Stone in which he claimed that Gaetz paid for sex with the same 17-year-old Greenberg pleaded guilty to trafficking. The Daily Beast, which uncovered the letter, has also reported on several suspicious Venmo transactions between Greenberg and Gaetz. Gaetz has repeatedly denied he had sex with anyone underage.

Newsmax may not have interest in cutting any checks for Gaetz, but they’ve still been letting him come on the network to plead his case. He did so as recently as last month, professing his innocence before lumping himself in with the worst people on the planet. “Donald Trump, Donald Trump Jr., Rudy Giuliani, Steve Bannon, Matt Gaetz — it’s never the meek that they come for,” he said. “It’s always those who are fighting hard for the America First agenda.”

He’s at least convinced House Minority Leader Kevin McCarthy (R-Calif.), who has said Gaetz will remain in the House of Representatives at least until charges are filed. “I’ve spoken to Mr. Gaetz about the accusations,” said McCarthy, who has also fought to keep conspiracy theorist Marjorie Taylor Greene active in Congress. “He’s told me he’s innocent of the accusations.”