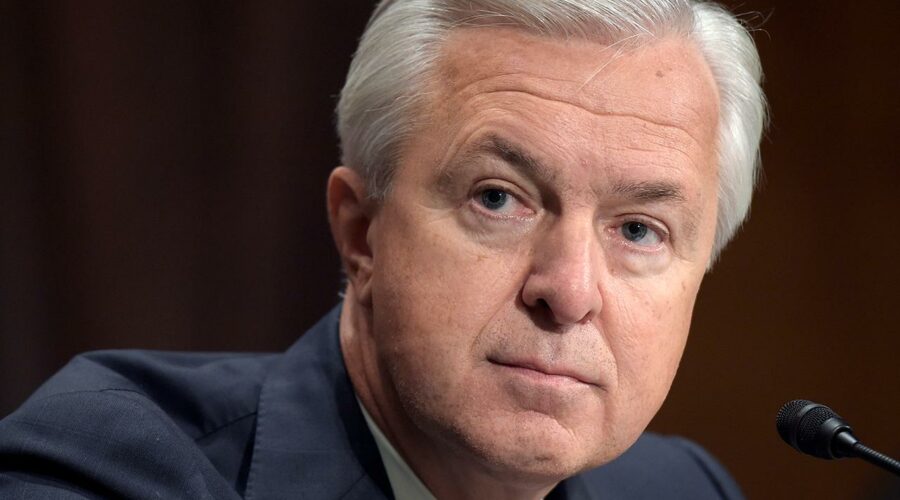 Morning Business Outlook: Former Wells Fargo CEO John Stumpf has been banned for life from the banking industry and must pay $17.5 million in fines.

Sen. Elizabeth Warren, D-Mass., on Tuesday urged the Federal Reserve to break up Wells Fargo, arguing that widespread corruption and a slew of scandals at the financial powerhouse posed "substantial risks" to consumers and the broader financial system.

In a letter to Fed Chairman Jerome Powell, Warren asked the central bank to use its authority to separate Wells Fargo's core banking unit – like offering checkings and savings accounts – from its other financial services. She argued the Fed had the power to do so by revoking Wells Fargo's status as a financial holding company under the Bank Holding Company Act.

"The Fed has the power to put consumers first, and it must use it," the Massachusetts Democrat wrote. "By invoking its full authority to protect consumers and the financial system and requiring Wells Fargo to separate its consumer-facing banking arm from the rest of its financial activities, the Fed can ensure that Wells Fargo faces appropriate consequences for its long-standing ungovernable behavior."

Wells Fargo did not immediately respond to a FOX Business request for comment.

For nearly five years, Wells Fargo has been in Washington's sights after it came to light that the company made millions by creating fake accounts for customers without their knowledge, sometimes charging unnecessary fees or harming individuals' credit ratings.

The Fed, under the leadership of Janet Yellen, responded to the scandal by imposing an unprecedented asset cap on Wells  Fargo in 2018, which it remains under to date.

The bank, the fourth largest in the U.S., has also paid nearly $4 billion in fines and penalties since the scandal broke in 2016.

But regulators at two key agencies, the Office of the Comptroller of the Currency (OCC) and the Consumer Financial Protection Bureau, last week slapped Wells Fargo with an additional $250 million sanction, saying the bank has been too slow to compensate victims and address underlying weaknesses in business practices.

The OCC said the bank engaged in "unsafe or unsound practices" and violated the terms of a 2018 consent order. The agency also said it would restrict Wells Fargo's mortgage business until the problems are addressed.

"These new revelations have once again made clear that continuing to allow this giant bank with a broken culture to conduct business in its current form poses substantial risks to consumers and the financial system," Warren wrote.

In a separate letter to the chairman of Wells Fargo's board of directors, Warren questioned whether CEO Charlie Scharf and the board were capable of managing the bank. She accused the bank of additional "corruption" and "mind-boggling" mismanagement under Scharf, who earned more than $20 million in the 2020 fiscal year.

"It is unfathomable that Mr. Scharf has been so well compensated while failing for the last two years to address the company’s ‘top priority,’ and inconceivable that no member of the Wells Fargo Board or its top executives has been held sufficiently accountable," she wrote. "You owe your customers, your investors, and your regulators an explanation for Wells Fargo’s ongoing inability to meet legal and regulatory requirements."

14/09/2021 Politics Comments Off on Elizabeth Warren asks the Fed to break up Wells Fargo, citing a 'broken culture'
Markets