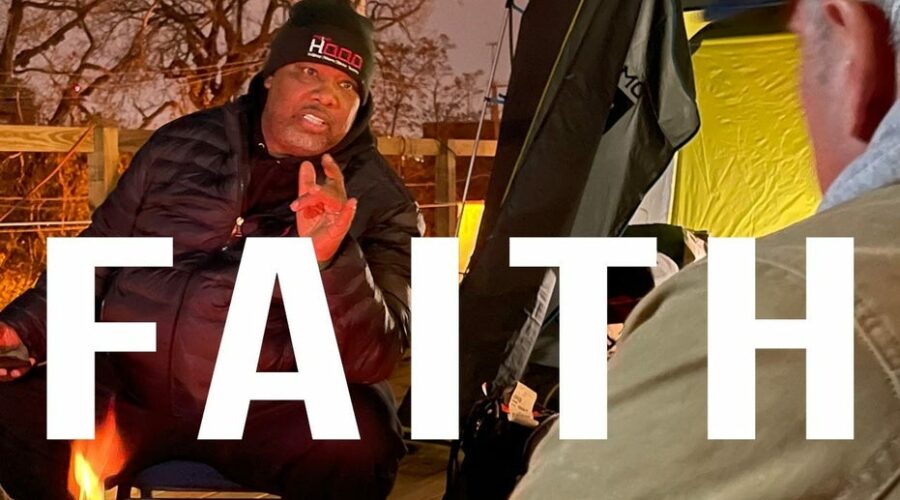 CHICAGO – Ten years ago, Pastor Corey Brooks tested his faith when he crossed the street from his New Beginnings Church and climbed onto the roof of a violence-plagued motel in the middle of a brutal Chicago winter. The pastor had become tired of the murders, drugs and prostitution that took place daily at the motel, which sat two blocks away from an elementary school. The pastor also had become tired of the deadly inaction from the city’s desensitized leaders; not even the Chicago Sun-Times’ ranking the pastor’s Woodlawn neighborhood as the most deadly was enough to stir them. So the pastor remained on the roof for 94 days through blizzards until he raised enough to purchase and demolish the motel. His faith paid off.

Today, the pastor finds himself testing his faith once again. When he came down from the motel, he thought it would only be a matter of time before he raised the funds to build a community center that would serve as “the shining city on the hill” for his deprived community. However, when the limelight left, so did the people with means. That is why this past month the pastor found himself ordering four cargo containers to be delivered to the site of the former motel (where the community center will be built one day). After he helped his church hand out 5,000 turkeys and fixings to families, the pastor once again took to the “roof” built on top of the massive containers. He will remain there for 100 nights with only a tent to keep the cold at bay.

This time, the pastor won’t be alone. He reached out to CEOs throughout the city and the nation, challenging them to join him for a night on the roof. He told me he hoped such an effort would educate some of America’s top minds about his community and help raise funds.

As I walked King Drive during the Thanksgiving food drive before the pastor went to the roof for the second time, I met folks who doubted the pastor. Some shook their heads and chuckled in disbelief. One said, “He’s gonna freeze his butt and it ain’t gonna make a difference.” One wild-eyed man, assuming that most visiting CEOs would be white, screamed that the pastor was the devil for consorting with whites. Other folks were sincere as they confided to me their worries that the pastor was not living in reality.

It was the latter group that gave me pause. When one walks these streets, it is hard not to feel the despair and abandonment. The South Side is arguably the most talked about neighborhood in all of America and it is the most neglected. Mayor Lori Lightfoot’s offices sit several miles away but she has done very little. Her most recent effort, a guaranteed basic income program, gives 5,000 impoverished households $500 a month — in a city where 500,000 individuals live below the poverty line. President Biden touted his Build Back Better legislation as a plan for all Americans, but when the South Siders hear about how racist landmarks across America must be renamed or how so-called racist bridges must be reconstructed, they cannot be blamed for thinking this is more virtue-signaling than true action. After all, what are they supposed to make of the fact that, at one point, our nation’s elected leaders earmarked $200 million for a San Francisco park to be built in the honor of one of America’s richest individuals, Nancy Pelosi?

His refusal was made possible by the one quality lacking in the naysayers: faith. There is faith in God and there is also faith in oneself and the community. Faith allows us to imagine a better future and it imbues us with the confidence we can arrive there one day. This faith scares most people because it requires a leap into the unknown. But without this leap, how can a new and better reality be forged?

That is why Brooks went to the roof of the motel for the first time.

When he came down from the roof, he was hopeful that the funds to build the community center would come shortly. However, he chose wisely not to put all of his eggs into that one basket. He relied on his faith as he began to develop his community center that would become known as Project H.O.O.D. (Helping Others Obtain Destiny) on the second floor of his church.

One of the programs the pastor created was the Violence Impact Team, which makes visits to homes to prevent retaliation killings. The team’s leaders, James Highsmith and Jeff Boyd, who served decades in prison, told me they prevented as many as 50 retaliations a month, a statistic that never makes the news. They work with the pastor to reform gangsters, such as the legendary Black Disciple Twins, Varney and Varmah Voker, into law-abiding citizens who mentor the youth. The pastor also created trauma programs to help youths deal with issues ranging from fatherlessness to the loss of loved ones to street violence. These youths then are put on the pathway to a college or a trade. One of the recent beneficiaries, a young construction foreman, said, “Poverty ran my family until it ran into me.”

Today, the Sun-Times no longer ranks Woodlawn as one of its most dangerous neighborhoods.

Still, the work is far from done. The South Side remains distant from modern America, the Chicago skyline ever so visible yet so distant.

So when the pastor went to the makeshift roof built on top of the cargo crates last week, it was as an act of faith. It was not faith in the sense of wishful thinking. It was faith backed by years of merit — the pastor hoped that people would see the merit in what he and his community achieved with so little.

Perhaps that is why it was only natural that he would invite CEOs to join him for one night on the roof. Many of them attained their positions through merit. I can hear the naysayers, especially in academia, whipping our their white privilege arguments like Pavlov’s dog. But these Americans have allowed themselves to be conditioned to view the world through a racial lens where they see skin instead of talent, limits instead of possibilities, divisions instead of commonalities, and, in the end, all they will have done is reinforce the racial divide that prevents progress.

Merit is one of the few qualities that allows us to move away from tribalism. Without merit to forge who we are, we are left to find meaningless esteem in our immutable characteristics.

When I asked Kayne Grau, the CEO of Uptake, a billion-dollar industrial artificial intelligence and analytics company, why he was going up to the roof as the pastor’s first guest, he paused for a moment. Then he said, “To close the gap.” He spoke like a man who operates in the world of faith and merit. He was humble in his admission that there was a gap of knowledge between himself and Brooks. Yet he had the faith to believe he could close that gap to gain a better understanding of the South Side. It is only then that he can begin to truly empower Brooks in his journey.

After I left Brooks on the roof after that first night, I saw youths cleaning up the empty food boxes from the Thanksgiving food drive. I thought that if I were them, I would be begging the pastor to let me sit by his side on the rooftop as he talked to those CEOs who sit on top of vast networks of knowledge and connections. I would hear things I never heard on the streets or in the classrooms. I would want to know how they made it, what advice they have. I would ask if I could work in the mailroom or some entry level position to gain the experience of a world different from mine. Then I would begin to chart my own journey through life with faith in myself and God, a faith made possible because some South Side pastor had enough faith to change the reality of despair into the reality of possibilities.

Eli Steele is a documentary filmmaker and writer. His latest film is "What Killed Michael Brown?" Twitter: @Hebro_Steele

14/12/2021 Politics Comments Off on ELI STEELE: Chicago pastor tests his faith as he returns to roof for 100 days to end violence
Markets