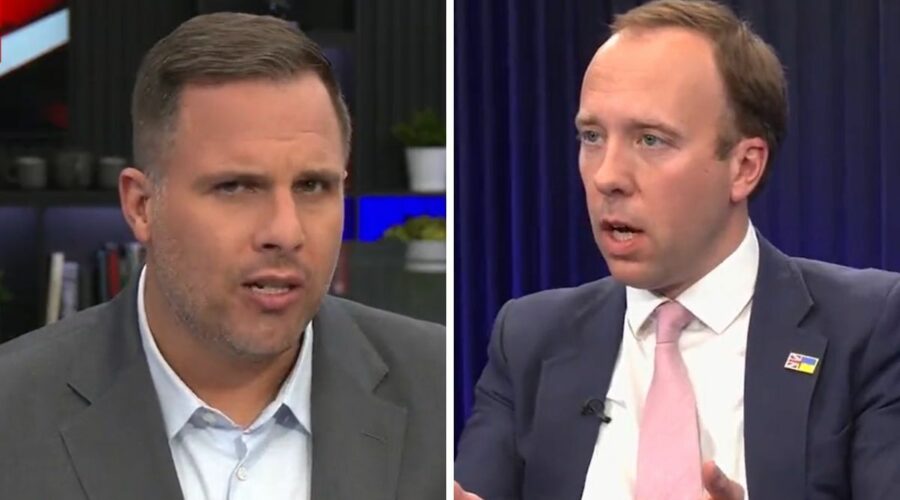 On Tuesday evening, Dan Wootton ran a segment on GB News in which the host said Matt Hancock had the “stomach-churning” and “cringeworthy” realisation that his “frontline political career is over”. Last week, the former health secretary was “purposefully snubbed”, according to Mr Wootton, as he did not receive a cabinet position after Rishi Sunak became the new Prime Minister.

Mr Wootton said: “No leader with half a brain would publicly associate with Hancock.”

The news host went on to criticise Mr Hancock’s response to the 2020 pandemic lockdowns and described the former health secretary as “the man who took some glee in denying us of our god-given freedoms for over a year.”

Mr Wootton also said the former Tory MP was “the same man who all along was breaking those rules himself” when it was revealed last year that Mr Hancock admitted to breaking social distancing guidelines while having an affair with an aide.

He said: “Man Hancock is not only a disgrace to politicians everywhere, he’s a narcissistic delusionist.

“It’s really no wonder he has convinced himself entering ITV’s D-list jungle on I’m a Celebrity…Get Me Out of Here is an altogether altruistic pursuit.”

The kiwi-born reporter said: “The man is especially letting down every constituent in West Suffolk who he will neglect for three weeks chewing on kangaroo testicles down under while they suffer through an unprecedented cost of living crisis and god knows what else.”

GB News Senior Producer Ben Leo took to West Suffolk to ask locals how they feel about the MP leaving for the reality television show.

Mr Leo said to one man: “Your MP Matt Hancock is off to the jungle, do you support him, or should he be here sticking up for you guys?”

One man replied: “The crisis this country is going through right at this moment, and he’s serving himself off in Australia, come on Matt. Get real.”

A woman said she believed “he should resign as an MP and we should have a new MP” while another constituent said: “He should be sacked!”

One young woman said: “I don’t think that politics should be crossing over into the TV side of things, it’s already a big game as it is.”

Conservative MP Tim Loughton also said Mr Hancock losing the whip was “the least he deserves” and said: “I’m completely disappointed and disgusted that he’s put himself and his so-called celebrity career ahead of serving his constituents.”

The official spokesman for Prime Minister Rishi Sunak said: “The PM believes that at a challenging time for the country, MPs should be working hard for their constituents, whether that is in the House or in their constituency.”

The spokesman also added it was “unlikely” that Mr Sunak would be watching the reality programme.